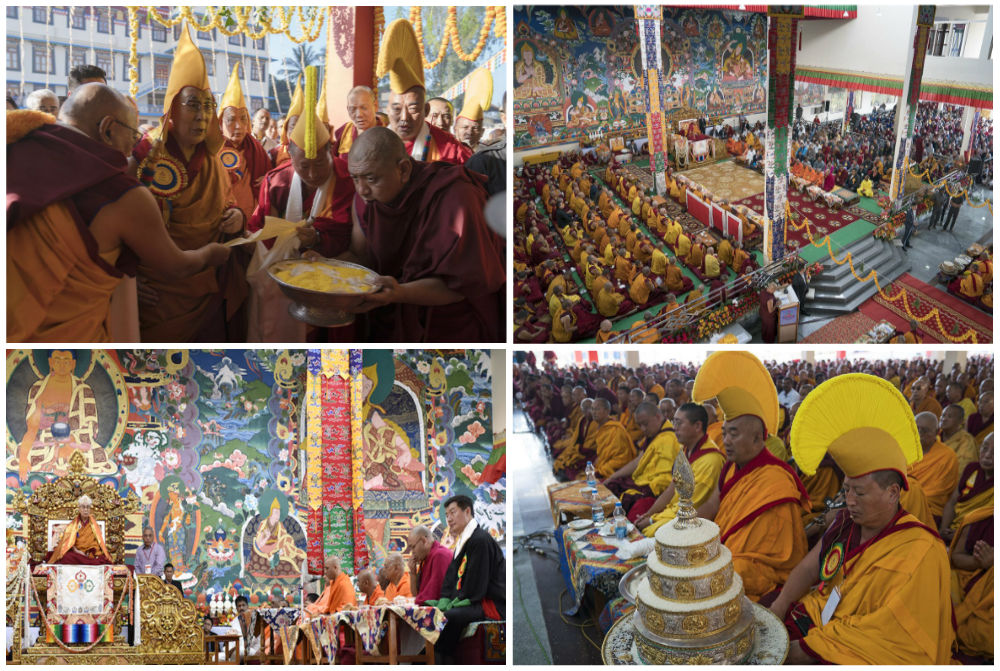 Bylakuppe, India — “Suffering is rooted in ignorance and the Buddha taught emptiness to eliminate ignorance. All the Buddha’s teachings flow from understanding dependent arising, which is not easy to achieve," His Holiness the Dalai Lama told a gathered crowd of a reported 8,000 in Bylakuppe, Karnataka State, South India.

At the entrance to the new Debate Courtyard and Science Centre he cut the ribbon and recited verses while tossing grain in the air to invoke auspiciousness. At that back of the daïs at the head of the yard he lit the central wick of a large butter lamp and took his seat on the throne, according to a report, which is posted on the official website of His Holiness the Dalai Lama.

In his welcome address, the Abbot of Sera-Mey Monastery explained that in 2012, when His Holiness was staying at Drepung Loseling, he reported to him the difficulties the monastery was facing with their existing debate yard. Monks were exposed to sun in the hot season and rain in the monsoon. His Holiness offered seed money for the project and they began to plan, with the result that the present structure is now complete. He thanked donors and everyone who contributed to the construction, requesting that everyone involved dedicate the merit created to His Holiness’s long life and the success of the studies of the monks who will use the new facility.

One of the chief guests, Jagadguru Sri Shivarathri, offered His Holiness a shawl, a garland and a turban. He expressed his appreciation of the way Tibetans have kept ancient Indian knowledge alive and admired their use of reason and logic in debate. He was followed by Khenpo Sonam Tenphel, Speaker of the Tibetan Parliament in Exile, who praised the far-sighted vision in the steps His Holiness had taken in exile to preserve Tibet’s language and culture. This vision was amply supported by the Government of India, as well as the government of states such as Karnataka.

President Dr Lobsang Sangay greeted his fellow guests. He recalled the start of the settlements in 1963, the establishment of the great monasteries in 1974, as well as the expansion in 1989 and the rebuilding of the Sera-Mey assembly hall in 2002. He noted that the opening of this debate courtyard was the next stage in a steady process of development.

In his speech in Tibetan he also noted that it is now ten years since the monastery had to resolve the dispute concerning Dolgyal. He congratulated the monastic authorities on the way they took His Holiness’s considered advice to heart and organized a peaceable separation of the majority of the monks from those who were reluctant to forego the practice. The audience was avid in its applause. He added that His Holiness encourages harmonious relations among all religious traditions.

He outlined His Holiness’s vision for restoring the Nalanda Tradition among Tibetans in exile, in the Himalayan regions, in Tibet and in China, as well as reviving interest in ancient Indian knowledge in India.

Sri Sri Sri Nirmalanandanatha Swamiji spoke in praise of His Holiness’s edifying leadership. He mentioned how inspiring it was to see so many monks gathered together.

His Holiness acknowledged the various distinguished guests and thanked the previous speakers for sharing their views. He recognized that Indian understanding of the workings of the mind and emotions that has grown from experience of the practices of concentration and insight—shamatha and vipashyana—preceded the appearance of the Buddha. In fact, the Buddha was participating in those traditions when he determined to sit and meditate under the Bodhi Tree.

His Holiness reminded the audience of his admiration for the religious harmony that prevails in India, which he regards as an example for others to follow, adding that he considers himself a messenger of ancient Indian wisdom. He pointed out that the Buddha’s advice to be sceptical, to accept what he had to say only after properly examining and analysing it, was unique. The key to expanding our knowledge, he said, is to employ our human intelligence to the full.

As he presented a statue of the Buddha to each of the two Swamis he told them that while of course the Buddha was the founder of Buddhism, His Holiness regards him not only as a profound thinker and philosopher, but also as a scientist.

The Sera-Mey Disciplinarian’s expression of thanks to the guests, donors and all who had contributed to the construction brought the inauguration to an end.

“The Sera-Mey Abbot asked me to give a major teaching on this occasion,” His Holiness explained. ????ut I told him that, because I’m having to be more careful about making myself tired, I would teach Je Tsongkhapa’s ‘In Praise of Dependent Origination’.

‘There are many religious traditions in the world, each conveying a message of love and compassion, tolerance and forgiveness, contentment and self-discipline. Indeed there are some Christian monks and nuns I’ve met who seem more contented with less than many of our Tibetan monastics. I met a Roman Catholic monk at Montserrat in Spain who lived as a hermit in the mountains for five years, surviving on bread and tea. When I asked him what he was practising, he told me he’d been meditating on love. And as he said this I could see the sparkle of real joy in his eyes.

“Of course, although our different traditions have a common message, they hold a variety of philosophical positions, which reflect people’s different needs and dispositions.

“In his first teaching the Buddha explained the Four Noble Truths, as is recorded in the Pali tradition. During the second turning of the wheel of dharma, he taught the Perfection of Wisdom, which we find recorded in the Sanskrit tradition. This text, ‘In Praise of Dependent Origination,’ praises the Buddha for his use of reasoning and for explaining emptiness in the context of dependent arising. Because things exist in dependence on other factors, they are empty of intrinsic existence. Dependence reveals relativity—things can only be posited in dependence on other factors.

“There are several sets of reasoning that support this, among them the Diamond Slivers, and the examination of identity that is ‘neither one nor many’. The reasoning of dependent origination avoids the extremes of nihilism and permanence. When Nagarjuna refers to things that are dependently arisen as merely designated he is indicating the Middle Way View. This is what you find when you read his work, ????undamental Wisdom of the Middle Way’, which shows how things are empty of intrinsic existence.

“Suffering is rooted in ignorance and the Buddha taught emptiness to eliminate ignorance. All the Buddha’s teachings flow from understanding dependent arising, which is not easy to achieve. Reading Je Tsongkhapa’s early works, like his ‘Golden Rosary’, a commentary on ‘Ornament for Clear Realization’, reveals that he had not reached a final understanding of emptiness at that point.

“The explanatory transmission of ‘In Praise of Dependent Origination’ is rare, but I received it from the Kinnauri teacher Gyen Rigzin Tempa, who in turn had received it from Khangsar Dorje Chang. Another of my teachers Ngodrup Tsognyi was very keen on it.”

His Holiness read steadily through the text, elucidating his reading with explanatory remarks. He encouraged those who wish to know more to read Chapters 18 and 24 for Nagarjuna’s ????undamental Wisdom’. He also commended his ‘Seventy Verses on Emptiness’ and ‘Sixty Verses on Reasoning’. When he reached the end, His Holiness remarked that as a boy he had been able to memorize this text in a single morning and now he urges others to memorize and recite it too.

His Holiness was requested to release a new edition of Nagarjuna’s ????undamental Wisdom’ and a commentary to it in Tibetan published by Sera-Mey Monastery. He thanked everyone who had attended the inauguration and teaching for coming. Expressing admiration for the way the monastery’s monks are committed to their studies, he suggested that there is no reason why lay people shouldn’t study too. Buddhism is not only about faith, but involves reaching an understanding, which requires that we use our intelligence.