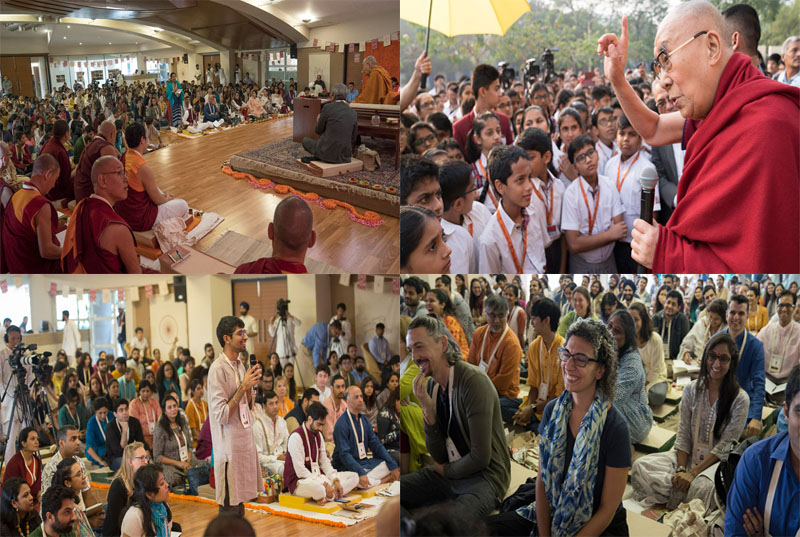 His Holiness the Dalai Lama speaking at the Somaiya Campus Auditorium in Mumbai, India on December 8, 2017. Photo: OHHDL/Lobsang Tsering

Mumbai — "We make friends on the basis of trust, which comes about as a result of affection and concern for others. We can't buy trust or acquire it by use of force," His Holiness the Dalai Lama told a group of 350 young people at the Mumbai, Maharashtra based "Somaiya Vidyavihar". His Holiness also said that the knowledge we Tibetans had received from the masters of Nalanda could contribute to the well-being of our troubled world.

His Holiness the Dalai Lama traveled from Dharamsala to Mumbai via Chandigarh on Thursday, December 7, 2017. On Friday morning he drove across the city, as the sun shone in a hazy sky, to the campus of the Somaiya Vidyavihar, whose motto is 'Knowledge Alone Liberates'.

According to this list, which is posted on the official website of the Dalai Lama, His Holiness was welcomed on arrival by the President, Samir Somaiya, the grandson of the founder who His Holiness also knew, and his wife. First of all His Holiness spoke to school children from the steps of the building.

"Good morning, how are all of you? How did you sleep last night? I slept nine hours before getting up at 3am to begin my meditation. Meditation is about keeping the mind clear; thinking deeply about reality. It's about thinking about our emotions, asking ourselves 'Why do I feel angry?' and coming to understand the advantages and sound basis of positive emotions like warmheartedness. I've faced difficulties in my life, but the peace of mind I've gained from mind-training has helped me cope. I've found that peace of mind supports both physical and mental health and that emotional hygiene contributes to it."

The Nobel Peace prize laureate asked the children if they preferred it if he smiled or frowned and pointed out that it's smiling that reflects warmheartedness, and not money or political power, that attracts friends. His Holiness mentioned that India is great not only in terms of population and its democracy, but because of its ancient knowledge, which he recommended incorporating into modern education.

In the Somaiya Campus Auditorium 350 young people awaited him. He made his way to the daïs, took his seat and began to talk. "I'm very happy to be here again," he said, "since I've had a close relationship with the Somaiya family for a long time.

"One of the unique things about human beings is our brain. It's given us language and the ability to analyse the reality behind appearances. This is something the Buddha taught about. Of course, he was the founder of Buddhism, but I also consider him to have been a great thinker and philosopher. Because he gave this unique advice, 'O monks, just as the wise test gold by burning, cutting and rubbing, Examine my words thoroughly And accept them only after you have investigated them—not just out of respect for me', I also consider him to be something of scientist too.

"Nalanda masters like Nagarjuna, Chandrakirti and Buddhapalita followed this advice and challenged whether ten particular sutras could be accepted literally. Others like Dignaga, Dharmakirti and Shantarakshita developed logic as an investigative tool.

"I began to study the works of these masters reluctantly when I was about seven years old, but it wasn't until I was about thirteen that I began to appreciate that what they taught was useful for keeping the mind sharp and helping us rein in our emotions. I learned that there are three objects of knowledge—things that are manifest that we know through direct perception; things that are slightly hidden that we understand through logical inference and things that are so obscure that we can only know about them by relying on the testimony of someone with experience.

"When we came to India, our aim was to protect and preserve our knowledge and I sought the help of Nehru, Rajendra Prasad and Radhakrishnan. The Government of India gave special support to monastic students.

"In 1973, I visited Europe for the first time. In 1979, I also went to the USSR and the USA. Altogether I met a great number of people, scholars and scientists among them. I discovered that despite the physical development they enjoyed, people in these parts of the world experienced surprising levels of stress and anxiety. No one wants problems, yet it seems that many we face are of our own making. Disturbing emotions disrupt our peace of mind, destroy our health and upset our families and communities.

"As social animals we need friends, but we make friends on the basis of trust, which comes about as a result of affection and concern for others. You can't buy trust or acquire it by use of force. Its source is warm-heartedness, which our modern materialistic education system fails to foster. It also doesn't teach us how to tackle our disturbing emotions. Consequently, I began to realize that the knowledge we Tibetans had received from the masters of Nalanda could contribute to the well-being of our troubled world.

"I mentioned to another gathering the other day that both the Buddha and Mahatma Gandhi were shaped by their Indian cultural heritage. We too have the opportunity to study, practise and implement this ancient knowledge."

His Holiness remarked that although there is a lot of talk about peace, we live in a violent world where nuclear weapons still exist. He suggested that it is not enough to wish to be free of them, there needs to be a timetable for their elimination and we have to stick to it. He said he was heartened by this year's award of the Nobel Peace Prize to the International Campaign to Abolish Nuclear Weapons (ICAN). He reported encouraging President Obama to keep up his work in this direction.

Answering questions from the audience after a short break for tea, His Holiness explained that we all have a seed of instinctive, biological compassion as a result of the affection we receive at the start of our lives. However, it tends to be limited and biased, we have to use reason to extend it to encompass others and see them too as our brothers and sisters. He commended 'Guide to the Bodhisattva's Way of Life' as the book that best explains cultivating compassion.

His explanation of the theory of rebirth included the notion that while the body creates a cooperative condition for consciousness, its substantial cause is consciousness, which therefore has no beginning. He cited evidence he has encountered of two young Indian girls and two young Tibetan boys who had clear memories of their past lives and mentioned that he too had such memories when he was young.

His Holiness referred to Buddha Shakyamuni as the fourth of this fortunate aeon, following Krakucchanda, Kanakamuni and Kashyapa. He quoted the verse expressing the Buddha's thoughts after attaining enlightenment: "I have attained this nectar-like Dharma, this profound, peaceful, unelaborated, uncompounded clear light, but if I were to teach about it, there is no one now who would understand it."

However, after 49 days he met his former companions in austere practices and gave them his first teaching in Sarnath. He introduced them to the Four Noble Truths, the very foundation of his teachings—the truths of suffering, its origin, its cessation and the path to it.

He said that if his listeners really wanted to know what the Buddha had to teach about wisdom, they should read, study and think about Nagarjuna's wonderful book, 'Fundamental Wisdom of the Middle Way', which like the 'Guide' is available in the original Sanskrit as well as in English translation.

His Holiness explained that the first turning of the wheel of dharma consisted of the Four Noble Truths. The second conveyed the perfection of wisdom and provided a much deeper explanation of the truth of cessation. The third turning of the wheel, which consisted of sutras like the Unravelling of the Thought and the Tathagata Essence Sutra, laid the basis of the Mind Only School of thought.

He clarified that whereas the second turning dealt with the objective clear light, the third dealt with the subjective clear light, the most subtle consciousness, the basis of tantra and the practices of Mahamudra and Dzogchen. He expressed a concern to keep this knowledge alive and a commitment to reviving an appreciation of ancient Indian knowledge among modern Indians.

Adjourning to the Chanakya Hall, His Holiness and the 350 members of the audience were served a wholesome traditional Indian lunch, after which he left. The students spent the afternoon reviewing what they had heard in groups with well qualified young Geshes.