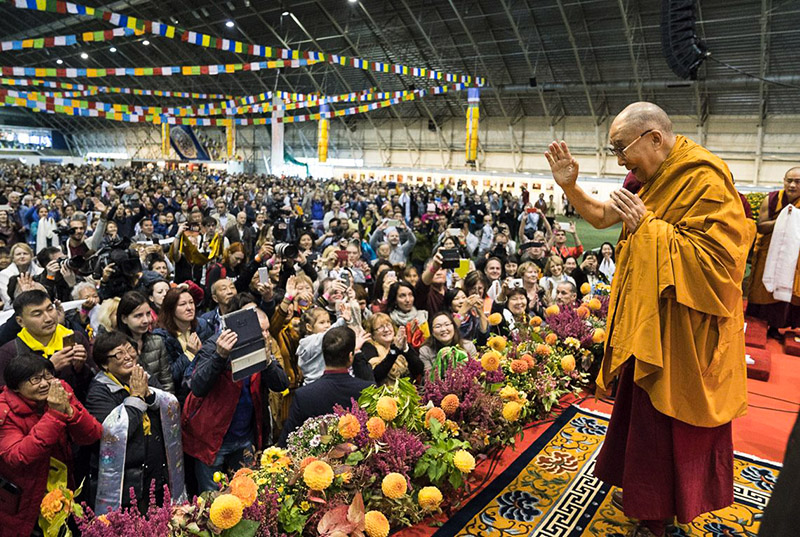 Riga, Latvia — Negative emotions such as anger, fear and shortsightedness, which arise in the absence of compassion and inner values, the spiritual leader of Tibet, His Holiness the Dalai Lama told a crowd of thousands of devotees on the final day of a three-day tour of the Baltic state of Latvia.

Having arrived and acknowledged the cheering audience of thousands at the final session of teachings in Riga, Latvia on September 25, 2017, His Holiness lost no time in sitting down and explaining that he was first going to give some background to the day's teaching. He mentioned that in Tibet teachings and traditions introduced before or after the time of Lotsawa Rinchen Sangpo in the 11th century are distinguished as belonging to the Nyingma or Ancient tradition.

Within the Nyingma is a categorisation of Buddhist teachings into the nine vehicles. Three outer vehicles founded on the Four Noble Truths; three outer tantras and three inner tantras. The outer vehicles—the Hearer, Solitary Realizer and Bodhisattva vehicles deal with antidotes to the negative emotions in relation to the Three Trainings. The outer tantras, kriya, upa and yoga tantras concern Vedic-like asceticism, practices such as ablutions and fasting.

The inner tantras, powerful transformative methods, are the maha, anu and ati yogas. Maha yoga includes the generation stage. Anu yoga includes the completion stage and ati yoga, the utmost yoga, because it employs the innate mind of clear light is referred to as taking pristine awareness into the path. It involves the realization that all phenomena are nothing other than the appearances of the naturally arising primordial wisdom which has always been beyond arising and ceasing. His Holiness remarked that comparisons can be made with what is described in the Guhyasamaja and Kalachakra tantras.

His Holiness mentioned related texts that include Longchen Rabjampa's 'Seven Treasuries' and his 'Trilogy on Finding Comfort and Ease', which he received from Trulshik Rinpoche and which he encourages Nyingma centres of learning to study and uphold. He added that he has received the explanatory transmission of the 'Treasury of Dharmadhatu' and has undertaken the requisite 100 day retreat.

His Holiness observed that Je Tsongkhapa had a special connection to the Nyingma tradition due to the teachings he received from the Great Adept of Lhodrak. He was someone who had a vision of Vajrapani and received teachings from Manjushri himself. Je Rinpoche's disciple Gyalwa Gendun Drup, the first Dalai Lama and his successors, the 2nd, 3rd, 5th and 13th Dalai Lamas were all non-sectarian in their approach to practice.

"In the early part of my life," he continued, "I followed only the Gelug tradition. But a time came when I wanted to receive the Guhyagarbha - Essence of Secrets - from Khunu Lama Rinpoche. However, there was some reluctance about this because I was then propitiating Dolgyal. Later, I discovered that the 5th Dalai Lama had written that Dolgyal was a perfidious spirit arisen from distorted prayers who harms the Buddha's teachings and sentient beings. I gave it up.

"Eventually I received Guhyagarbha and Rongzom's commentary to it from Dilgo Khyentse Rinpoche, as well as teachings from Trulshik Rinpoche. The irony is that while I propitiated Dolgyal my religious freedom was curtailed and now that I have restricted its practice its proponents complain their freedom is limited.

"I am not able to do much Dzogchen practice, but these days I do Vajrakilaya, Hevajra, Five-deity Heruka, Vajrayogini, which comes from the Sakyas, Kurukulla, as well as the Kagye Chidril composed by the Fifth Dalai Lama. Rigzin Pema Trinley urged, 'Though you let other teachings decline, don't let the Kagye diminish'. I have a commitment to read daily from the 'Treasury of Dharmadhatu', so I'll read the first chapter to you now."

When that was done, His Holiness went on to read Dza Patrul Rinpoche's 'The Uniqueness of the Wise Glorious Monarch: Three Keys Penetrating the Core'.

He concluded, "Over the last couple of days I've given teachings that belong to the general structure, derived from the Nalanda Tradition. I received 'Stages of Meditation' from Sakya Abbot Sangye Tenzin and the 'Concise Stages of the Path' from Ling Rinpoche, Trijang Rinpoche and Tagdrak Rinpoche. Today's teaching, which belongs in the specialized category, I received from Dilgo Khyentse Rinpoche and I had fruitful discussions about it with Sakya Abbot Khenpo Rinchen. I hope these instructions are of some benefit to you."

His Holiness returned to the Skonto Hall after lunch to take part in discussions with singer-songwriter, Boris Grebenschikov; film director, Vitaly Mansky; and theatre director Alvis Hermanis, moderated by director, actor, and playwright Ivan Vyrypaev. They touched approvingly on His Holiness's promotion of secular ethics as a more universal source of inner values.

Asked to summarize problems in today's world, His Holiness mentioned fear, anger and short-sightedness, which arise in the absence of compassion and inner values. He declared that the best way to fulfil your own interest is to cultivate warm-heartedness. He pointed out that compassion yields a calm mind and self-confidence, which result in less fear and anxiety. Concern for others well-being naturally gives rise to trust that is the foundation of friendship.

He remarked that a doctor never advises you to be angrier—she tells you to relax, which, in addition to being physically at ease, entails having peace of mind. He further clarified that the purpose of life is to find happiness. We plan for next week, next year or even next century, but there is no guarantee about any of it. We are sustained by the hope of something good.

Replying to a member of the audience from Ukraine who asked if the world is really getting better, His Holiness pointed out that in the early 20th century, when nations declared war, their citizens joined up to fight without hesitation. By the end of the century this had changed. People protested about the Vietnam War and demonstrated in their hundreds of thousands against the invasion of Iraq. People are tired of violence and a popular desire for peace is a growing.

Finally, asked how to deal with problems and difficulties, His Holiness replied that he finds the 8th century Indian Buddhist master Shantideva's advice to be realistic and helpful. Analyse the problem and whether you are able to overcome it. If you can, that's what you should do and there's no need to worry about it. If you can't, worrying about it won't help.

As discussions came to an end, Natasha Inozemtseva offered thanks on behalf of the organizers to everyone who contributed to the success of these three days of teachings— staff, volunteers, security personnel, translators and so forth. Then the event was brought to a poignant conclusion with a gentle song by Boris Grebenschikov. The crowd applauded and he continued to play as His Holiness left the stage.