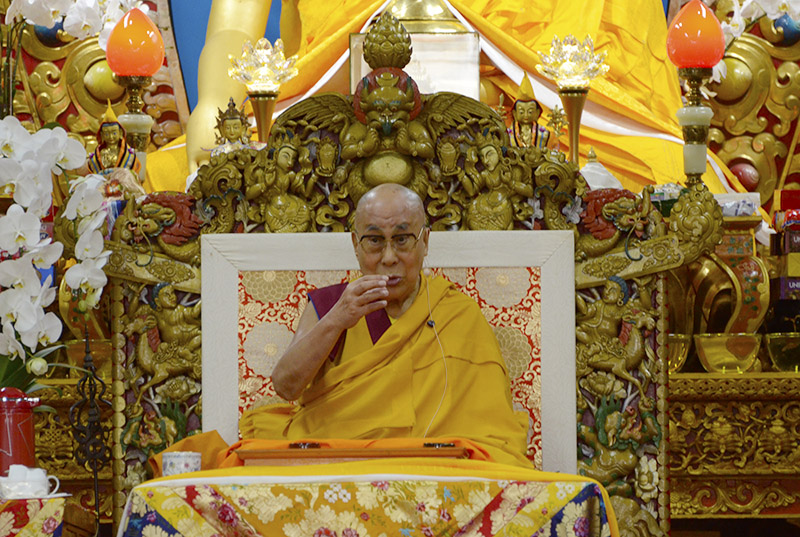 Dharamshala, India — Expressing his strong commitment towards a more humane and peaceful world, the spiritual leader of Tibet said: "We must work together as global citizens of a shared planet with a sense of responsibility," because, in today's highly interdependent world, "a global loss is an individual's loss as well, the same as if it benefits globally, closely benefit to each and every individuals."

Over 8000 people from around the world gathered on Tuesday at the Tibetan main temple in McLeod Gang, a Himalayan hill town of Dharamshala, to listen to His Holiness the Dalai Lama. Principal disciples on this occasion are a diverse group of 1500 Buddhists from Singapore, Malaysia, Hong Kong, Indonesia, Thailand, Vietnam and Korea. Once he had greeted the audience, including senior monks and guests, he began his first day's talks of a four-day teachings.

"Today we'll hold a Dharma discourse in what has become an annual event for SE Asian Buddhists," His Holiness said, adding: "but first there will be a celebration of the installation of the new Ganden Tripa. It's scholarship and practice that qualify candidates to occupy Je Tsongkhapa's throne. They are individuals who have served as Abbot of either Gyudmed or Gyudtö Tantric College and risen to become Jangtse Chöjey or Sharpa Chöjey.

"Until the 13th Dalai Lama's restructuring of monastic education there were people who occupied the throne only on the basis of privilege. He restored the scholarly ranking of the Geshe Lharampa degree with the consequence that Ganden Tripas were genuine scholars once again. The first of these was the 93rd Ganden Tripa, Yeshe Wangden, who was enthroned in 1933.

"The first occupant of the Ganden Throne after Je Rinpoche passed away was his principal disciple, Gyaltsab Dharma Rinchen, an impeccable scholar, so it was important to restore erudition to this honoured position."

The 104th Ganden Tripa, Lobsang Tenzin Rinpoche from Tsangpa Khangtsen, Sera Je Monastery, as part of the traditional mandala offering, presented statues of Je Tsongkhapa and his two disciples to His Holiness. He then took his seat on a specially prepared throne to His Holiness's right.

After Thai monks had recited the Mangala Sutta in Pali, the 'Heart Sutra' was chanted in Chinese. His Holiness announced that he was going to teach Buddhapalita's commentary to Nagarjuna's 'Fundamental Wisdom', largely in the form of an oral transmission. He said he had received an explanation of this treatise, as well as Chandrakirti's 'Clear Words', which is based on it, from Ganden Trisur, Rizong Rinpoche.

His Holiness added that he had received explanations of Nagarjuna's 'Fundamental Wisdom' from Tsenshab Serkhong Rinpoche and Khunu Lama Rinpoche, who was able to offer clarifications of certain points from the Sanskrit edition. He mentioned approvingly that the organizers have made translations of Buddhapalita's text available. His Holiness said he would do his best to explain the text as he went along, but that those listening should read and review it afterwards.

In his preamble His Holiness recalled that Buddhism originated in India and, in the form of the Pali Tradition and the Sanskrit Tradition, spread to almost all of Asia. Noting that all Tibetan Buddhist traditions have roots in Nalanda University, His Holiness remarked that what is unique about the Buddha's teaching is his encouragement of investigation and analysis.

Reflecting on the current situation in the world, he observed: "We are gathered peacefully together here, but elsewhere people are killing each other, families are destitute and children are dying of starvation. We see this reported daily on the television. Right now there are many people struggling amidst floods, the result of natural disasters we can't do much about, but many of the other problems we face are man-made. We bring these problems on ourselves because we are overcome by disturbing emotions like attachment and anger—we have little discipline over our minds.

"If it was our basic human nature to be angry, there would be nothing to be done. However, scientists have found evidence that basic human nature is compassionate. All 7 billion human beings alive today were born from a mother and were nurtured by her after that. We all have a biological seed of love and affection that we can cultivate since we are dependent on others for our survival.

"I believe that when we see the disadvantages of negative states of mind, we'll try to avoid them. As a human being, my first commitment is to encourage the creation of a more peaceful and more compassionate world. And since all our various religious traditions carry the same message of love and compassion, even if they take different philosophical approaches, my second commitment is to promoting inter-religious harmony."

His Holiness provides insights into global issues that are all closely related to each and every individuals, because they are all reciprocal interdependent. His Holiness went on to say, "Because human nature is basically compassionate, I believe it is possible that decades from now we will see an era of peace—but we must work together as global citizens of a shared planet, because a global loss is an individual's loss, the same as if it benefits globally, closely benefit with each and every individuals," he noted.

The Buddhist leader asserted , inner peace will not come through prayers alone but mostly through awareness and compassionate oriented education that we can make the world more peaceful place. "Buddha himself said that not committing unwholesome actions and cultivating wealth of virtue is common to all religions; what's unique in Buddhism is that one has to tame the mind thoroughly and that is the teaching of Buddha. So the transformation has to come through by using our critical faculty called intelligence."

"If we use our intelligence, we will be able to weigh the positive aspects of loving and compassionate living versus negative impacts of negative emotions," he reasoned by saying "faith and intelligence are the means to transform our mind; We are all human beings possessing a seed of compassion. We have to use our intelligence to cultivate the inner values associated with it."

His Holiness referred to conversations he has been having with scientists for almost 40 years. At the outset, most of them regarded the mind as just a function of the brain. However, towards the end of the 20th century, he said, neuroscientists began to observe that changes in the brain could be the result of functions of the mind. He drew attention to ancient Indian traditions that deal with concentration and insight, shamatha and vipashyana, that have accumulated profound understanding of the workings of the mind. He suggested that it is in this context that Buddhism focuses on employing our intelligence to bring about a transformation within—a transformation of the mind. These Buddhist traditions were kept alive in Tibet.

During an intermission, while members of the audience relieved themselves, His Holiness answered questions about deity yoga, vegetarianism and the relation of dependent arising to ultimate reality.

Resuming his teaching, His Holiness stated that after his enlightenment the Buddha is said to have thought—
Profound and peaceful, free from complexity, uncompounded luminosity -
I have found a nectar-like Dharma.
Yet if I were to teach it, no-one would understand,
So I shall remain silent here in the forest.

However, he eventually turned the wheel of Dharma by teaching the Four Noble Truths. The second turning of the wheel involved the Perfection of Wisdom teachings, which included clarification of the meaning of true cessation. His Holiness stressed that the Buddha's teachings deal with reality. Among the schools of thought that emerged in India, the Mind Only school asserted that nothing exists externally and only the mind is real. The Middle Way School, to which Buddhapalita belonged, asserted that although nothing has intrinsic existence, things exist by way of designation.

Beginning to read the text, His Holiness observed that the title is given in Sanskrit and Tibetan to show authenticity. The homage to youthful Manjushri indicates that the book belongs to the category of higher knowledge or Abhidharma. Ending the first day's session His Holiness declared how fortunate he felt to be giving this teaching, especially since the Ganden Trisur, Rizong Rinpoche, from whom he had heard it, was present among those listening. The teaching will conclude on September 1, 2017.