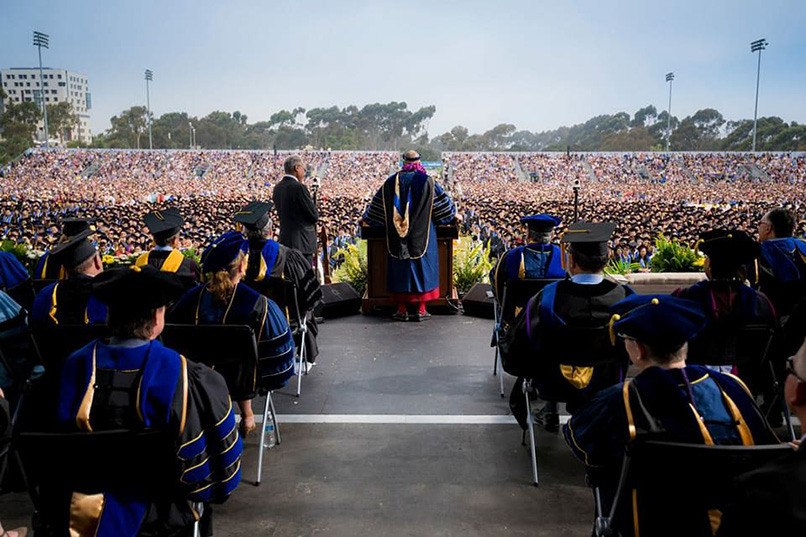 San Diego, CA, USA — Delivered the keynote address at the commencement ceremony of University of San Diego's class of 2017, His Holiness the Dalai Lama of Tibet on Saturday, June 17, 2017, said: "No longer violence. No longer this huge division", the youth of today can do that as they have both "opportunity" and "responsibility" to create "a happier world."

Over 25000 people including 6000 students and 15000 guests attended the ceremony held at the University's RIMAC field.

In his keynote address, His Holiness spoke about world peace as originating from inner peace and happiness. He described the younger generation as future leaders of the world and urged the graduating students to shun violence and create a more peaceful world.

"We are at the beginning of the 21st century now. And you have the opportunity and also the responsibility to create a better world, a happier world," he said. "No longer violence. No longer this huge division. You can do that," His Holiness told the crowd.

The Nobel Peace Prize Laureate has referred to the problems currently prevailing in the world such as climate change as man made and said it can only be resolved when we undertake a common effort to combat a common problem.

"Human beings are social animals and heavily interdependent. Climate change threatens us all.Its one of those natural challenges that teach us that we must work together, making a common effort to reach a common goal. A more peaceful world and a more peaceful century require that we rely not on weapons but developing a widespread inner peace," His Holiness said.

The spiritual leader of Tibet also spoke about secular ethics and how the ancient knowledge passed down through generations has an important place in today's world. He extolled the rich philosophical knowledge of ancient India and how universities should incorporate these secular ethics in modern education.

"Irrespective of whether you are a believer or a non believer, emotional intelligence and secular ethics affects us all. Our national or religious identities are secondary differences. We are all human beings first. And as human beings, knowledge about emotion, about mind, is crucial," His Holiness said, adding that a proper knowledge of emotions help tackle our destructive tendencies.

The Tibetan leader further called for a compassionate cultural revolution in China and explained why China should pay more attention towards inner development along with economic development.

Pradeep Khosla, Chancellor of the University, said the messages of compassion and betterment of humanity espoused by His Holiness the Dalai Lama aligns with the university's mission, as the school attracts like-minded humanitarians.

Khosla also presented His Holiness the Dalai Lama with the UC San Diego Medal, which he described as the school's highest honour, with only 12 awarded since 1987.