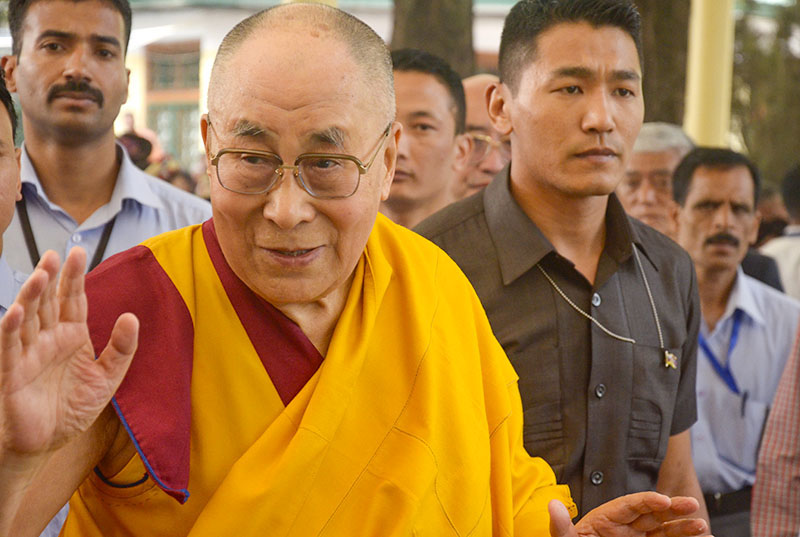 Dharamshala — Urging young Tibetan people to keep Tibetan Buddhist tradition alive, His Holiness the Dalai Lama said that the understanding of the mind is integral to the Buddhist traditions that can be of "crucial benefit to future generations."

"Today's discussion is mainly aimed at young students," he explained. "There are almost 700 students from various colleges around Dharamsala, as well as from Delhi, Bengaluru and Chennai, besides some from the USA and the Netherlands. In addition we have 1500 school students, members of the Dharamsala Introduction to Buddhism Association, and a group of monks from Thailand with their Abbot who will take out a peace march. I'd like to greet you all."

"I memorized this text myself when I was ten years old, so I was able to join in with you just now. It's very important to know how the mind works. Peace of mind is not something that can be directed from outside. It needs to be approached from within. It's because our minds tend to be unruly that we see problems in the world such as the shocking killing that is taking place and the growing gap between rich and poor. To tackle such problems we need a calm, disciplined mind.

"Religious people pray for peace, but prayer alone is not enough, what will bring peace in the world is people cultivating peace of mind. As it is said, 'Buddhas do not wash unwholesome deeds away with water, nor do they remove the sufferings of beings with their hands, neither do they transplant their own realization into others. Teaching the truth of suchness they liberate (beings)'. The Buddhas help us by revealing the truth."

His Holiness mentioned the Buddha's advice not to take what he had taught on faith or at face value but to analyse it—advising his followers to scrutinize his teachings as a goldsmith examines gold. He praised this skeptical approach and explained how valuable it has been in his discussions with scientists over the last 30 years or so.

The Buddhist leader also stressed that the advice that things do not exist the way they appear is useful because it helps counter misconceptions about reality, as is the advice to tackle self-cherishing attitudes and cultivate altruism.

His Holiness spoke of the origins of Buddhism in Tibet. He recalled seeing an empty space in a temple in Xi'an in 1955 where the Lhasa Jowo was said to have once sat. Despite this and other links to China, the Emperor Trisong Detsen, chose to invite the great master Shantarakshita from India to the Land of Snow where he established the Nalanda tradition.

His Holiness remarked that compared to the ancient Indian knowledge of the workings of the mind and emotions, modern psychology is quite rough. However, he conceded that whereas scientists used to consider the mind to be no more than a function of the brain, they now have evidence that the brain undergoes measurable change as a result of prolonged meditation.

The Nobel Peace lureate also referred to the interest some scientists are taking in cases of 'thukdam' in which clinical death occurs and yet the body remains fresh for some time afterwards.

Observing that religious traditions all seem to have three aspects, His Holiness spoke of the practice of love and compassion, patience and tolerance, as well as contentment and self-discipline that they all have in common. He discussed their philosophical differences, that while many religions believe in a creator God, early Samkhyas, Jains and Buddhists have no such belief, considering the law of causality to be more significant.

Nevertheless, he was clear that philosophical differences are no ground for quarrelling, since there are a wide range of variant views even within Buddhism. The third aspect shared by all religious traditions is cultural and as such is related to social customs, some of which are out of date and in need of change.

The spiritual leader of Tibet cited the role of the Dalai Lamas as political leaders as an example of something that needed changing, which he did when he retired in 2011. He also mentioned the Indian caste system and the application of Sharia law as examples of cultural traditions that are due for review. Responding to questions from the audience His Holiness explained that refuge in the Three Jewels can be done on the basis of view or action. The important thing, he reiterated was to be a 21st century Buddhist and to take refuge on the basis of understanding.

In relation to his conversations with scientists His Holiness declared that he never brings up topics like past and future lives or nirvana. He said that he admires scientists' broad-mindedness and their willingness to change and improve their understanding.

Asked how he remains happy every day, His Holiness's first reply was that he regards all 7 billion human beings alive today as his brothers and sisters, a reflection he finds helpful and powerful. In the context of disturbing emotions being based on a misconception, a clinging to a sense that things exist as they appear, he also finds cognitive therapist Aaron Beck's observation that our sense of anger or attachment is 90% mental projection not only to be helpful, but also in tune with Nagarjuna's advice. He concluded that taking a more holistic view and cultivating warm-heartedness are a sound source of happiness.