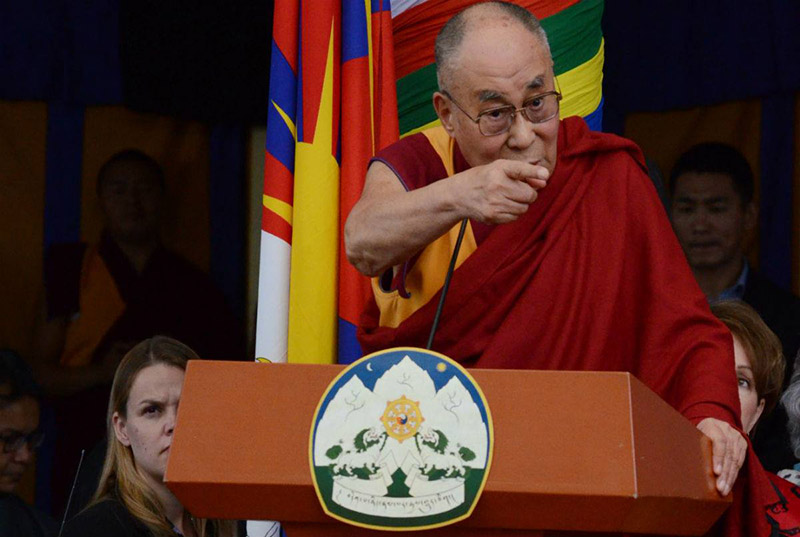 Dharamshala — Expressing his gratitude to a high-level bipartisan US Bipartisan Congressional Delegation for coming to Dharamshala and for its efforts in support of the issue of Tibet, His Holiness the Dalai Lama described the United States as the global leader for world peace.

"America is a leading nation of the free world and plays a pivotal role in the promotion of peace around the world," said the 82-year-old Nobel Peace Prize Laureate, His Holiness the Dalai Lama.

The main temple in Dharamshala was packed with thousands of Tibetans and supporters on Wednesday, eager to greet the US Congressional Delegation led by US House Democratic Leader Nancy Pelosi and Rep. Jim Sensenbrenner, a Republican who has represented Wisconsin's 5th district for 38 years.

His Holiness the Dalai Lama graced the public felicitation organised by the Central Tibetan Administration (CTA) in honor of the US delegation visiting Dharamshala. The delegation, was on a two-day visit to Dharamshala to reaffirm the United State's continued support on the Tibet issue.

"U.S. Democratic House leader Nancy Pelosi has been one of the longest friend and supporter of the Tibetan people, who has stood with us in the most critical of times and situations. I thank all of you today for expressing your genuine support for the Tibetan cause and solidarity for Tibetans inside Tibet," His Holiness said.

"Today I wish to greet all of you Tibetans who are actually gathered here, young and old, monastics as well as lay-people, all those who are not here but live in free countries and those of you who live in fear and anxiety in Tibet," he said.

"According to archaeological findings there have been Tibetans in Tibet for almost 30,000 years, one of the oldest civilizations. In 1959, many of us came into exile. All we knew for sure was the sky above and the earth below," he said, adding: "We had no idea what would happen to us. We lived in fear and unease."

"After 58 years we have made friends with people we didn't know before. People support us not for reasons of economic or political influence, not because we are poor, but because they believe in justice. This delegation from the USA, led by Nancy Pelosi, who has been my friend for a long time, supports us because we have truth on our side and because we are non-violent. Support for us, even among Chinese people, has increased because we are looking for a mutually beneficial solution. We attract support because of the candour and compassion for others to which we are accustomed.

"Human conflict cannot finally be resolved through the use of force and resort to weapons. In the 20th century historians estimate 200 million people died through the use of force, but with no positive result. We haven't resolved problems by force in the past and we won't in the future. People support Tibetans because of our pursuit of candour, justice and non-violence. These derive from the Nalanda tradition, a tradition rooted in compassion that we have kept alive for more than 1000 years.

"The complete Nalanda tradition has only been preserved in Tibet. It's something of which we are proud and something that today we can share with others. When we came into exile we seemed helpless, but what we can contribute to the world at large is a raising of awareness of compassion. And by standing by our principles we'll reach the dawning of a new day for Tibet. Those of you who are determined to defend our cause, despite the difficulties involved, I'd like to thank for your friendship and support."

His Holiness went on to explain that if we have peace of mind we will not only be happy but will enjoy good health. He said that Tibetan culture focuses on inner transformation. It's not based on blind faith, but on recognizing the interdependent nature of things. Experience has shown him that what earlier Tibetans preserved and passed down is a wonderful tradition.

"The Chinese people can be our friends. To establish harmony between Tibetans and Chinese we need to reach a mutually beneficial solution."

His Holiness led the delegation upstairs. He took them first into the Kalachakra temple where monks of Namgyal Monastery, led by their Abbot Thomthog Rinpoche, were performing Kalachakra prayers in connection with a fully constructed sand mandala. The also visited the main temple where His Holiness introduced the various images to them. He explained that depictions of the emaciated 'fasting Buddha' are a reminder of the hardship the Buddha underwent to attain enlightenment.

Describing the thousand armed statue of Avalokiteshvara he told the delegates that a similar image standing in the Jokhang in Lhasa was smashed during the Cultural Revolution. Some remnants had been brought to him from Tibet and he showed them two of those faces.

Indicating the statue of Guru Padmasambhava he spoke of how the Emperor, Scholar and Adept—Trisong Detsen, Shantarakshita and Padmasambhava—had worked together to establish Buddhism in Tibet in the 8th century CE. Because Shantarakshita was a logician as well as a philosopher, the use of reason and logic had been an integral part of Tibetan Buddhism right from the start.

The Buddhist leader related this to what he thinks of as four aspects of the Buddha. He was the founder of Buddhism, certainly, but he was also a philosopher, a thinker and sceptical like a scientist. Because of this he recommended his followers not to accept what he taught at face value, but to investigate it in the light of reason and only then accept it.

Nancy Pelosi asked about the scriptures stacked on either side of main Buddha statue and His Holiness told her that about 100 volumes preserve what the Buddha taught, while 225 more contain the treatises of subsequent Indian Buddhist masters. The spiritual leader of Tibet and the entire delegation walked back to his residence. They enjoyed tea together before the delegation left for the airport and their flight to the Indian capital New Delhi.

The eight-member US delegation who arrived at Dharamshala on a two-day visit on Tuesday. They met His Holiness the Dalai Lama and had lunch with him on the same day. In the afternoon they visited the Tibetan Children's Village School and later met with the Kashag and leaders from among Tibetan Women. In the evening the delegation was entertained at the Tibetan Institute of Performing Arts (TIPA).

Tibet was invaded by the Communist regime in China, starting in 1949. Since that time, over 1.2 million out of 6 Tibetans have been killed, over 6000 monasteries have been destroyed— Crimes against Humanity and Genocide include murder, massacres, torture, rape, starvation, extreme deprivation, forced marches, enslavement, brutal violence, and systematic extermination. Beijing continues to call this a 'peaceful liberation', that the "Tibetans are living in a Maoist socialist paradise."