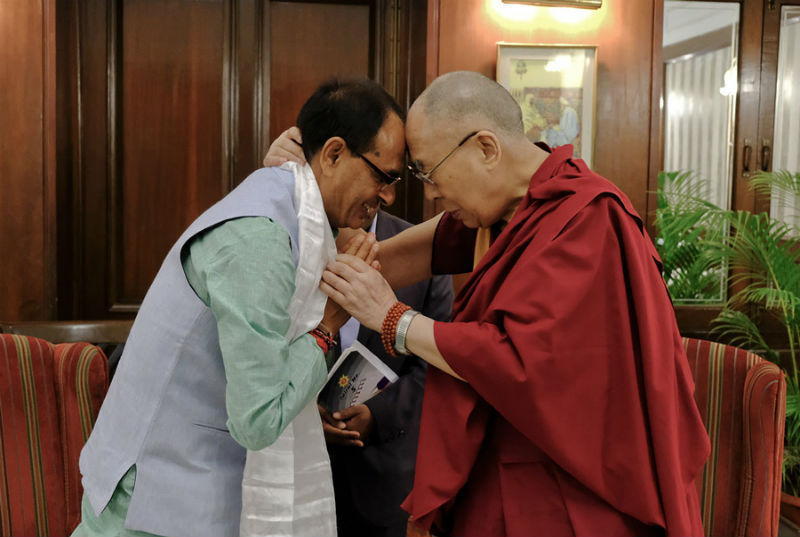 Bhopal, Madhya Pradesh — "Every person in the world wants to live in peace and happiness," the spiritual leader of Tibet, His Holiness the Dalai Lama said in Madhya Pradesh, while addressing the 'Namami Devi Narmada-Sewa Yatra’, a campaign, which will may set an example for the whole world, when it comes to protecting the rivers, including a massive tree plantation drive for 118 days on both banks of Narmada River.

The spiritual leader of Tibet was in the Indian state to participate in the ongoing ‘Namami Devi Narmada-Sewa Yatra,’ which is aimed at conserving Narmada river, the PTI reported on March 19, 2017.

“India is predominantly an agriculture-based economy and rural India must be transformed for the country’s development. “The focus should be on developing basic facilities like health and education in rural areas. All the basic requirements of the people should be made available in the villages. India will transform only through the rural transformation,” the Dalai Lama said.

The Tibetan spiritual leader also stressed the need for greater participation of women in different fields. “The women are more sensitive and full of compassion. Their enhanced participation will make the world a better place as they can ensure promoting deeper human values,” he said.

While lauding the river conservation campaign launched by MP Chief Minister Shivraj Singh Chouhan, who also participated in the programme, the Dalai Lama said the people should think holistically as far as global warming was concerned. “The environment has been changing across the world. Our approach should be holistic. CM Shivraj Singh Chouhan has been making efforts for conservation of the river Narmada. People should actively participate in such campaigns to make them successful,” he said.

The spiritual leader said, “Our ancestors were living here on the earth. Our future generation will live here. We need to save water, carry out plantations.” He said the people across the world have been facing problems due to racism and apartheid.

“We need to be united against discrimination and atrocities. The racism and apartheid are behind most of the social problems across the world. Every person in the world wants to live in peace and happiness,” he added.

The Dalai Lama said the basic needs of all seven billion people of the world like water and food were the same despite the technology revolution.

His Holiness also spoke about violence, Starvation Exist Due to Negligence, Rich-Poor Gap: A lot of problems, mainly violence and starvation, exist due to negligence and a "huge gap" between the rich and the poor, he said.

During his address on the "art of happiness", the monk said that harmony among different faiths exists in India, which is unique to the world. "All religions peacefully live together (in India). Occasionally, there are some problems mainly due to politicians...So that also is understandable. (There are) some mischievous persons in human beings (sic)," the Dalai Lama said in a lighter vein, evoking peals of laughter.

Acknowledging the existence of strife, he said, "(In) today's world, (there are) lot of problems...From the major disasters (which are) beyond control. But many problems, mainly violence, killing and starvation, are due to negligence and (due to) a huge gap between the rich and the poor."

The Nobel Peace Prize Laureate also hailed the peaceful co-existence of various faiths in India. "Bharat, this country. I think (since) over 2000 years, besides homegrown religions, Christianity, Islam from outside have coexisted peacefully and remained...I think that is unique. This does not exist in any other country," he said.

According to the report, the Tibetan spiritual head appealed to Indians to show the outside world that different traditions can thrive together. He advocated religious harmony in the midst of strife over beliefs in world. "All religions preach love and compassion. No religion says that God is full of anger. God is full of love. We are children of such a compassionate father (God). Basis of all religions is harmony.. Mutual respect," he added.

Observing that violence, killing and starvation are man-made, His Holiness said, "We human beings ourselves have created all this. So either we just ignore or make some effort. But any sensible human being cannot ignore. Therefore, ignoring is perfectly wrong...Remaining indifferent (to the problems) is wrong," he said.

Stating that religions act like medicines that destroy diseases, His Holiness the Dalai Lama said, "I never say that Buddhism is the best religion." He also underlined the need of an education system that will be based on secularism, inner values, love and compassion, and not on any religion. "Existing education system is materialistic which is not adequate..My first Guru to teach love was my mother. My mother was very kind. I never saw her angry, unlike my father who was short-tempered," he recalled.

At times, I use to pull his moustache and he used to beat me , His Holiness the Dalai Lama said in a lighter vein. He said love and affection start from the bosom of your mother. "Mother cuddles her newborn child and the infant starts reciprocating love. People who don't get this love get angry and (they) grow up with mistrust, according to studies," the Dalai Lama said, adding that happiness cannot be bought in any supermarket. He lauded Madhya Pradesh Chief Minister Shivraj Singh Chouhan for creating a department of Happiness last year.

Observing that "varna dharma" is outdated," he said that the caste-based system was based on a feudal mindset and was aimed at exploiting farmers. He recalled instances of ill treatment meted out to members of so-called lower castes in India in the past. "...Now time has come for different spiritual leaders to create a voice that all are equal...Dr B R Ambedkar had made great contribution..Wonderful," he said.