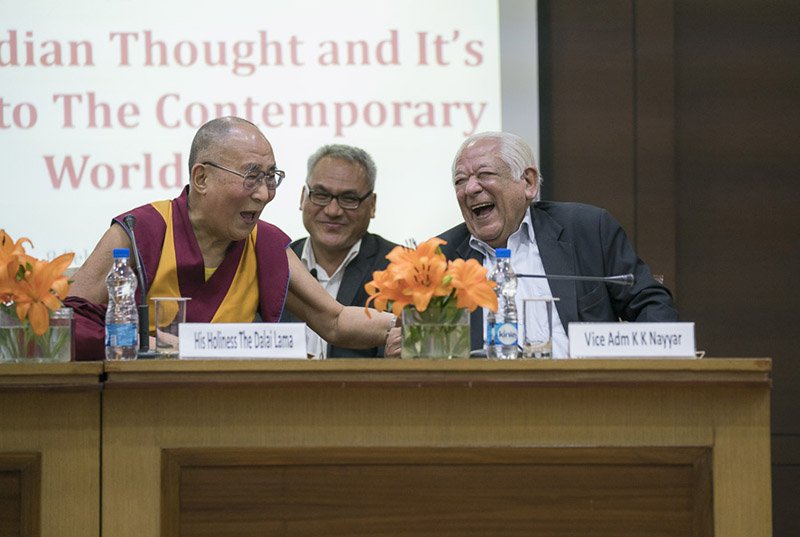 New Delhi — "Today, as we face something of a moral crisis and a widespread mental restlessness, a useful remedy is to use our intelligence, our marvellous brain, in conjunction with simple warm-heartedness," His Holiness the Dalai Lama said Wednesday during a talk at the Vivekananda International Foundation in New Delhi, while speaking about the relevance of ancient Indian thought in today's world.

In a far corner of New Delhi's diplomatic enclave, Chanakyapuri, are the elegant quarters of the Vivekananda International Foundation, an Indian public policy think-tank affiliated to the Vivekananda Kendra and staffed largely by retired bureaucrats, intelligence officials and retired military personnel. The Foundation invited His Holiness the Dalai Lama to speak today about the relevance of ancient Indian thought in today's world. Director Gen NC Vij met His Holiness on arrival and escorted him to a meeting room upstairs in which about 250 people were packed.

"Dear brothers and sisters, it is indeed a great honour for me to be here and able to speak to you in this institution that venerates the memory of Swami Vivekananda. I've visited the rock sacred to him at Kanyakumari and I have also attended meetings of the Parliament of the World's Religions that he famously addressed in Chicago in 1893. Many people were moved by the vision he expressed, but lately I felt the organization had become a bit sleepy. I told them so and when they invited me to attend their meeting in Salt Lake City they assured me that they had been re-invigorated, but in the end I was unable to attend.

"This meeting here provides me an opportunity to meet old friends, but when I see them it reminds me how old I am. Here's Mr Malhotra who was my Liaison Officer very early on and Mark Tully who interviewed me as I was about to embark on my first visit to Europe in 1973. He asked me then why I wanted to go and I told him I considered myself a citizen of the world. People like this are firm friends and in the context of rebirth and future lives, I believe that we will continue to be friends in the future too.

"When I arrived in India in 1959, one of my main concerns was to preserve our traditions of study and knowledge. Eventually, with the help of Pandit Nehru and various State Governments we were able to re-establish the monasteries that were our major centres of learning and which we regarded as the Nalandas of Tibet. Nehru was also of great help with another project to set up schools to provide our children with a Tibetan as well as a modern education.

"We were keen to preserve our language and traditions, which go back to Shantarakshita, the eminent scholar of Nalanda invited to Tibet by Emperor Trisong Detsen. He was renowned as a philosopher, logician and monk and today we can judge the quality of his erudition by what he wrote.

"Gradually, as I met people distinguished in different fields of study and held discussions with them I began to realise that the knowledge we Tibetans have kept alive remains highly relevant to the needs of today. Partly this is because the Indian masters of the past were so accurate and explicit in the way they explained philosophical points of view belonging to the Mind Only and Middle Way schools of thought. But it is also due to the depth of their understanding of, for example, the workings of our minds and emotions. Compared to profundity of ancient Indian psychology, I feel, if I may be so bold, that modern psychology has barely reached kindergarten level. From discussions I've held with scientists and others I have become convinced that the knowledge we have preserved can be of service to humanity today.

"Many scientists have also been impressed by the traditions of logic and epistemology we've upheld. They've been able to watch monks debating and at least one was so affected that he adopted some of the gestures we use to emphasize his own arguments. Several have been interested to know whether such a logical approach can be applied to other fields of enquiry.

"Today, as we face something of a moral crisis and a widespread mental restlessness, a useful remedy is to use our intelligence, our marvellous brain, in conjunction with simple warm-heartedness. We need to incorporate a sense of inner values in our education and learn how to tackle our emotions. Scientists tell us they've discovered that constant fear and anger has the effect of undermining our immune system, whereas training in the cultivation of compassion reinforces it. India's longstanding traditions of ahimsa in our conduct and karuna in our motivation have a contribution to make to this."

His Holiness observed that in modern India, as greater material development becomes the goal, less attention is paid to values like ahimsa and karuna. But he suggested that if you were motivated by karuna you would be less ready to exploit others' rights. He appealed to his listeners,

"My dear Indian brothers and sisters please pay more attention to these traditions of yours that go back several thousands of years, make yourselves more familiar with ahimsa and karuna. Remember too that India is the one country where all the world's religious traditions live in harmony together."

His Holiness was eager as ever to answer the audience's questions, but when the first one was, "You're 82 how do manage to look so young?" he replied, "That's my secret!" He went on to explain that he sleeps a good 9 hours a night and gets up at three to begin five hours meditation, which he clarified is mostly analytical. Despite the difficulties he's encountered in his life, losing his freedom at 16 and his country at 24 and receiving a steady stream of sad news from Tibet, this routine has prepared him to maintain his peace of mind.

Prompted to address misapprehensions about Islam, His Holiness declared that the label 'Muslim terrorist' is wrong, because the moment someone commits an act of terrorism they are contradicting the teachings of Islam. He repeated what Farooq Abdullah had told him, and scholars elsewhere have confirmed, that jihad actually refers to personal combat with negative emotions. He affirmed his view that the use of force is counter-productive, pointing out that when a father is killed his children feel pain to which they want to respond.

Responding to a question about Tibetan medicine His Holiness referred to an international conference that took place in 8th century Tibet attended by representatives of the Ayurvedic, Chinese and Yunani traditions. Elements of their practice combined with Tibet's native practices evolved into the Tibetan medical tradition. He admitted regularly taking Tibetan medicine himself, which he regards as having strong preventative qualities.

He spoke again of the interest scientists are beginning to take in the understanding of the mind that derives from ancient Indian tradition. He mentioned a conversation with a Swami he admires in Bangalore in which they acknowledged that ethics, concentration and insight—shila, shamatha and vipashyana—are found in both Hindu and Buddhist practice. What differentiates the traditions is that the one supports the idea of an atman, an enduring self, while the other relies on anatman, selflessness, but he made clear that which you choose is a private decision.

He also recalled that when a friend, a Catholic monk, one day asked him about emptiness or shunyata, His Holiness told him not to ask, saying it wasn't his business. He reported what cognitive therapy pioneer Aaron Beck told him about the way anger works in making us see the object of our anger as almost completely negative, when 90% of that judgement is just mental projection.

Mark Tully wanted to know if the Nalanda Tradition had anything to say about economics. His Holiness replied that the huge and growing gap between rich and poor, even in wealthy nations indicates a prevalent lack of moral principles.

Gen Vij brought the meeting to a close and thanked His Holiness for sharing his thoughts. For his part, His Holiness took time as he left the room to greet old friends, shaking and holding their hands as he exchanged recollections with them.