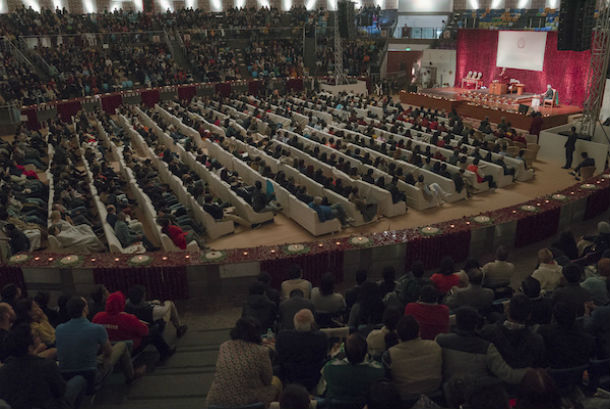 New Delhi — Underlining Indian virtues of secularism, His Holiness the Dalai Lama Sunday said that the ancient Indian knowledge could be universal values." The spiritual leader of Tibet was addressing over 3000 Indian youth, scholars and social visionaries on 'Reviving Indian Wisdom in Contemporary India', on February 5, at Talkatora stadium, in New Delhi, the capital of India.

Speaking at the Vidyaloke's inaugural public talk, His Holiness the Dalai Lama said that the ancient Indian wisdom, founded thousand years ago in the Sanskrit tradition, is replete with a value system that is fiercely needed in the modern time.

"The concept of Ahimsa and religious harmony is still alive in this country. Now, you should focus on your very own ancient knowledge and make efforts towards reviving these wisdoms in a secular way. These ancient Indian knowledge could be universal values," His Holiness said, while underlining Indian virtues of secularism.

"India is the only country which has the opportunity and resources to combine ancient Indian wisdom on inner values with the modern education to promote both physical and mental well being. If you make efforts in that vision, you can surely benefit the rest of the world."

Welcoming the initiative led by Vidyaloke on rekindling the intellectual wealth of ancient India, His Holiness offered his utmost conviction in further facilitating the revival. "Fortunately, we Tibetans lived isolated behind Himalayas so we had plenty time to study those ancient texts," he said rather jokingly. "I feel proud saying that the Tibetans have preserved these centuries-old traditions intact through rigorous study. As chelas, we are determined to serve you with that knowledge."

His Holiness also spoke about global responsibility and the sense of oneness that we should inculcate to create a happier and peaceful humanity.

"Each of us has moral responsibility to do something for humanity. All 7 billion human beings on this planet, from the time of our birth, have the global responsibility to build a happy world. Essentially, we are all brothers and sisters of one human family."

Nowadays, it's quite an alarming news when humans are killed by animals. But when a human being is killed by another human being, such news are received as something normal, His Holiness lamented.

Many of the conflicts in today's world, the Tibetan spiritual leader emphasised, rise from the notion of absolute victory for one and defeat of another. He alerted that the time had come to acknowledge that all peoples and regions were connected environmentally, economically and politically.

"While we must pursue our own self interest, we should remember to be wise selfish and not foolish selfish. Being wise selfish, means taking a broader view recognizes that our own long-term interest lies in the welfare of everyone. On the opposite is foolish selfish, is which being narrow minded and short sighted," he said.

Conveying gratitude and respect to His Holiness, Shri Analjit Singh, patron of the Vidyaloke initiative, said, "By providence, as India is geographically situated, the gift of providence to Tibet is the gift of universe to us. All through his younger life, he has only spoken of supreme compassion, altruism, love for others and universal brotherhood. He has always promoted the name of India, more so abroad than in India and His Holiness is recognised all over India as messenger of ancient Indian wisdom."

As a token of appreciation, the members of Vidyaloke initiative offered a homage of 17 Nalanda masters to His Holiness the Dalai Lama. On Tuesday, His Holiness will speak on 'Compassion and Ethics: Source of Happiness' at the convent of Jesus & Mary, New Delhi.