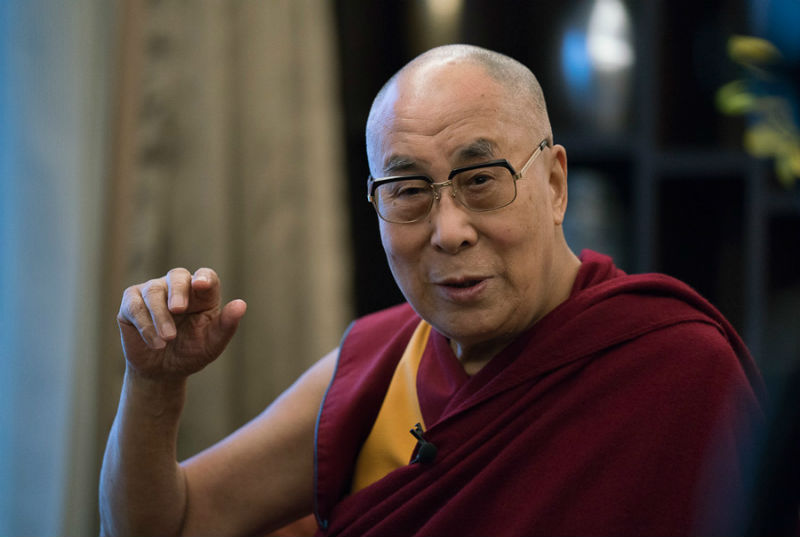 New Delhi — Explaining problems can always be better solved through understanding and dialogue, His Holiness the Dalai Lama said that anger and hatred obscure the ability of human beings to see things clearly, by leading unrealistic courses of action.

On Sunday, before embarking on three days of teachings in New Delhi, the capital of India, requested by interested Russians, the spiritual leader of Tibet gave interviews, first to Lenta Ru a major Russian news agency, according to the official website of the Office of the Dalai Lama.

Questions began with what we should expect as a result of changes taking place in the Western world. His Holiness replied that the Western world is part of the world as a whole, just as Russia is. The people remain human beings and it is a common human experience to feel something when others are dying, starving or being killed.

"Last century saw a lot of fighting. In the later part of the 20th century there was the Cold War, but that was better than a hot war. I admire the spirit of the European Union where former enemies, France and Germany have overcome discord and, working together as friends, have developed the EU. Union is based on mutual respect. The Soviet Union collapsed because it was totalitarian, the EU succeeds because of democracy."

Asked if he thought we could look forward to a greater era of peace, His Holiness answered that there is no other option. He said that if war escalated into nuclear war everyone would suffer. What sensible person would want that? Pressed to say how to be non-violent in a violent world, he replied:

"Use common sense and look at things from a wider perspective. Violence is linked to anger and hatred. Anger obscures our ability to see things clearly, leading us to follow unrealistic courses of action. Problems can always be better solved through understanding and dialogue. We should avoid glorifying anger—it's foolish to indulge those who are angry."

The woman correspondent from the Tuva branch of the Russian STS TV channel asked how Tuva should preserve its culture. His Holiness told her that protecting the language was important. Regarding its Buddhist culture, like Tibetan Buddhism it derives from the Nalanda Tradition. Keeping it alive requires more than faith alone, it requires understanding. His Holiness reiterated advice he regularly gives followers—be 21st century Buddhists.

"Study—develop a fuller knowledge of Buddhist ideas, the sense that there is a gap between appearance and reality and the detailed account of the workings of the mind and emotions."

"Today, we've gathered here for teachings requested by people from Russia," His Holiness announced. "When I was a child there were several eminent scholars from Kalmykia, Buryatia and Tuva in our monasteries. Now, there are about 500 students from these places and Mongolia studying in the monasteries in South India.

"The Nalanda Tradition we follow explains how we can transform our minds that are clear and aware by purifying them of negative emotions and imprints an acquiring insight—the basis, path and result.

Buddhas do not wash unwholesome deeds away with water,
Nor do they remove the sufferings of beings with their hands,
Neither do they transplant their own realization into others.
Teaching the truth of suchness they liberate (beings).

"In other words, they present the basis, path and result. Use your intelligence to analyse the teachings. With compassion and intelligence develop conviction and apply what you've understood in your lives."

His Holiness reported that he has been holding discussions with scientists for more than 30 years. However, there are now monks able to hold their own and explain a Buddhist position in such discussions too, as they revealed in the Emory Tibet Symposium in Drepung a few days ago. He declared he was impressed.

His Holiness remarked that Buddhists commonly pray for the welfare of all mother sentient beings, but stressed that if such prayers are to have meaning, they should be translated into action. He also clarified that it is the people we live with on this earth who we can do something for.

He described an experiment he has watched revealing the positive response of infants to animated images of children helping each other. They show misgivings about similar animated images of children hindering and obstructing each other. From these responses among children too young to speak, scientists conclude that human nature is essentially positive and compassionate. He said it is a sign of the inadequacy of contemporary education that it fails to preserve and develop this essential good-naturedness. He mentioned a draft curriculum for schools that is under development that is intended to redress this imbalance.

Mentioning the importance of harmony and respect among the world's religions, His Holiness drew comparisons between their variety and the various Buddhist traditions and even the different schools of Tibetan Buddhism. Variety springs from differences of need, time and circumstances. He affirmed that although he has retired from responsibility for Tibetan political affairs, he remains dedicated to protecting the natural environment and keeping the Tibetan language, culture and religion alive.