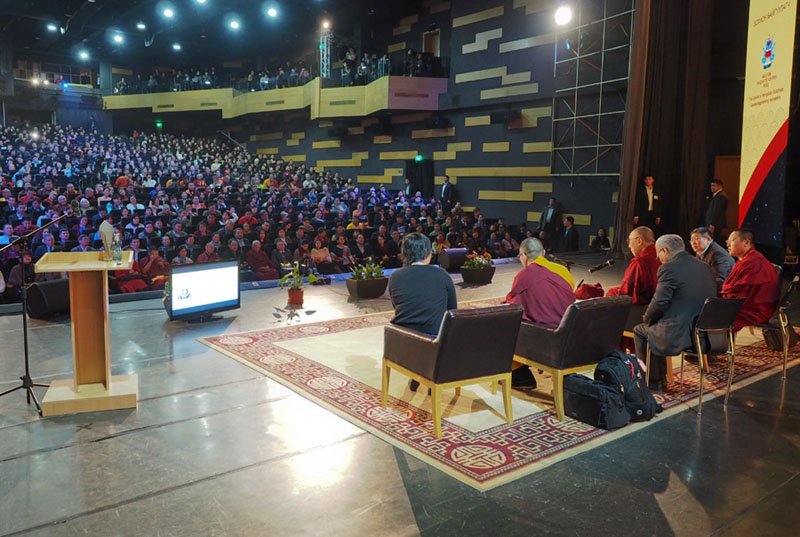 Ulaanbaatar, Mongolia — Addressing a conference on Buddhism and Science in Mongolia on November 21st, His Holiness remarked that having attended such meetings in the West, in India and Japan, he was now happy and honored to participate in such a conference in Mongolia.

The International Conference on Buddhism and Science was held in Ulaanbaatar and organized by the Tritiya Dharma Chakra Foundation and the Jetsun Dhampa Centre.

"I sometimes describe myself as half-Buddhist and half-scientist, for more than 30 years I have held discussions with scientists focused mainly on neuro-biology, cosmology, physics---especially quantum physics---and psychology. Buddhist literature also has a contribution to make to understanding of these four fields, so our discussions have been immensely beneficial. Buddhist scholars and practitioners have benefited from learning about physics while modern scientists have shown a keen interest in learning more about what Buddhism has to say about the workings of the mind and emotions."

Referring to historical relations between the two peoples, His Holiness remarked that even before they developed an interest in Buddhism, Tibetans and Mongolians were like brothers and sisters. In due course both came to uphold the pure Nalanda tradition.

"I usually divide Buddhism into three parts: science, philosophy—which deals for example with conventional and ultimate truth—and religion which is only of interest to spiritual practitioners. It's on the basis of Buddhist science and philosophy that we have been able to hold conversations with modern scientists over the last 30 years and more."

In his concluding remarks, His Holiness mentioned encouraging findings that basic human nature is compassionate and that this quality can be strengthened through education. He spoke of the need to promote a sense of the oneness of humanity based on human beings' shared compassionate nature. He stressed that promoting this will require vision and determination, but that conferences such as today's could make a valuable contribution to that goal.

Tomorrow, His Holiness will take part in a conference with Mongolian youth.