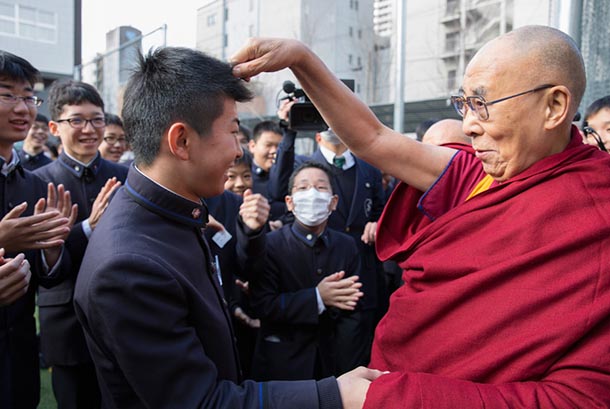 Tokyo, Japan — His Holiness the Dalai Lama, spiritual leader of Tibet, visited Seifu Gakuen Boys High School in Osaka for a discussion about Buddhism in the 21st century. 3,000 students and teachers of the school, which closely follows Buddhism, were in attendance.

Addressing the audience of mostly students, His Holiness said how the present century will take shape solely depends on vision of today's youth.

"Though the 20th century witnessed tremendous technological advancement, but two world wars and development of nuclear weapons resulted in the death of over 200 million people. There were regular wars in the beginning of the last century as people at the time take pride in retaliating when others declare war against them. However, this negative trend gradually changed in the later half of the century with the advent of dialogue as a means to resolve conflicts."

His Holiness said the violent conflicts taking place in early part of this century is a result of mistaken view of the people of the 20th century who resort to violence to achieve victory for oneself and defeat for others. "So the 20th century was not a happy century. Therefore the responsibility to make a happy 21st century solely lies on you," His Holiness told the students.

"Our generation is gradually disappearing. I have witnessed series of wars including the Second World War, Vietnam war, Korean war and civil war in China. The 20th century was not happy and peaceful century. So it is important to think about how to make this century more happier and peaceful. In my lifetime, To achieve this depend solely on how today's younger generation's effort and positive vision. The youngsters must think about the repercussions of the past century's wars and violence. You must make efforts and have visions to shape this century."

His Holiness said education is key to make this century a peaceful and happier society. "The modern education system is about material development and lacks focus on inner values. So, both teachers and students should pay attention on developing inner values and peace of mind by incorporating secular ethics a part of the curriculum."

His Holiness praised the spirit and determination of the Japanese to build from the ashes of two nuclear bomb catastrophes. He emphasized for efforts to ban use of nuclear weapons.

Closing the discussion at the school, His Holiness moved on to his other daily engagements. He will be in Japan until November 26th.