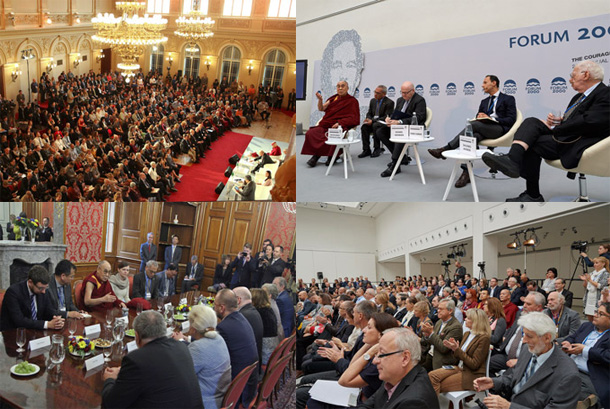 Prague, Czech — During His Holiness the Dalai Lama's trip to the Czech Republic, he was received by several Czech dignitaries, including the Minister of Culture, Mr Daniel Herman, and a group of parliamentarians of the Christian and Democratic Union - Czechoslovak People's Party.

The Minister and His Holiness first visited a chapel within the Ministry before sitting round a table to exchange views., where His Holiness said, "Among 7 billion human beings none are free from problems," he said, "but the best way to keep calm under such circumstances is to cultivate compassion for others. Religion should have a role in reducing violence by fostering a calm mind. Violence springs from anger, hatred and fear. However, in the world today, in addition to those who have no faith, there are those who only pay lip-service to religious belief and practice. If religion is to mean anything to us, we need to be serious about it."

"In today's world we have a quite materialistic culture, but material goods only provide us with physical comfort. Compassion, on the other hand, brings inner strength and inner peace. No matter how prosperous or poor you may be, if you have compassion for others you can be a peaceful happy person. However, it seems there are those who attend their places of worship, but whose lives are relatively untouched by the religious teachings involved."

As the gathering ended, members of the parliamentary group clustered round His Holiness, requesting him to sign books or take selfies with them.

Minister Herman accompanied His Holiness on the short drive to Manes Hall where they were both due to be panelists in a discussion of the Paradox of Religion as part of Forum 2000.

Moderator of that meeting, Shlomo Avineri welcomed them on arrival. He introduced the panelists, who also included Egyptian author and journalist, Tarek Osman to the audience of 150 and invited the Minister to begin. The panel covered topics including religion, the Middle East, and today's ongoing wars and took questions from the audience.

His Holiness stated, "On the one hand, all major religious traditions convey the same message of love and compassion. On the other, more than 1 billion people today have little interest in religion. Therefore, we also need to find other ways to educate people about the importance of inner values, such as compassion.

"In seeking to promote harmony among our religious traditions, it is useful to realize that the once prevalent notion that there can only be one truth and one religion best applies to personal practice. In terms of community and the world at large, there are evidently several truths and a multiplicity religions. When I was still in Tibet, I considered Buddhism was best. But once I reached India and came into contact with people like Thomas Merton and Mother Teresa, as well as wonderful Hindu, Jewish and Muslim friends, I developed a real appreciation and respect for other traditions."

Referring to the late Czech President, a dear friend of His Holiness's, he ended the forum by saying, "I admired President Havel and is struggle for truth. And although he is no longer physically with us, we have a responsibility to carry his spirit forward and to fulfill his vision."

Once again members of the audience converged on the stage clamoring for His Holiness's attention as they sought his signature, a handshake or the opportunity to take a photograph with him.

The Forum 2000 Foundation was founded in 1996 as a joint initiative of late Czech President Václav Havel in order to identify the key issues facing civilization and to explore ways to prevent the escalation of conflicts that have religion, culture or ethnicity through an open global dialogue.