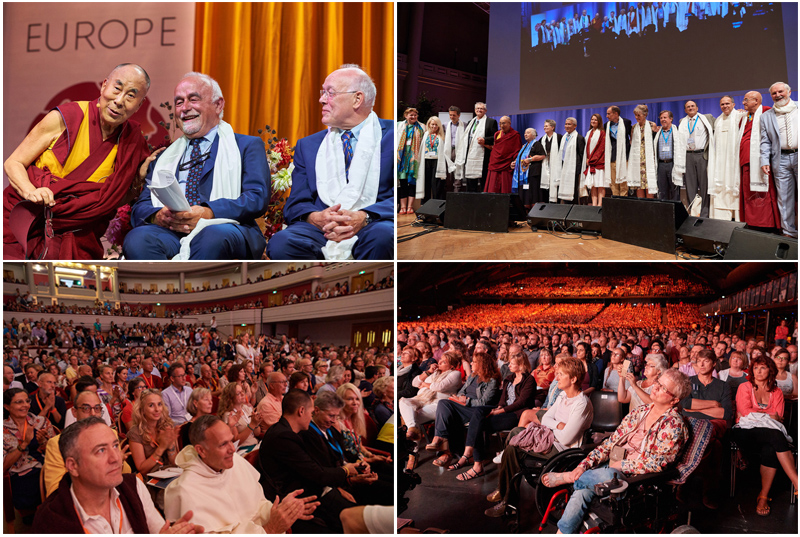 Brussels — Spiritual leader of Tibet, His Holiness the Dalai Lama, took part in a three-day Mind and Life Institute panel regarding the relationship between power and care in Brussels, Belgium from September 9th to the 11th.

The first morning of the panel saw a crowd of 1900 in the Bozar Centre for Fine Arts. The three-day panel's mission was to explore the relations between power and care, during which the goal was to find a healthy balance between the two.

During the morning panel, His Holiness made his first comments welcoming the audience and thanking the organizers. "I'm very glad to be here attending this Mind & Life meeting and appreciate all the effort that has gone into making it happen. We've been holding meetings like this for more than 30 years now and I'd like to pay tribute to Francisco Varela, who was an early inspired participant.

"During my first visit to Europe in 1973, I began to realize that while many of these countries were highly developed, not all their people were happy. They suffered from too much stress and competition. Material development provides physical comfort, but does not set the mind at ease. I thought that sharing methods for establishing inner peace, irrespective of your personal belief, might contribute to creating a better world. At the time I was warned off by members of our monastic community afraid that science would disrupt our traditions and Western friends who warned that science is the destroyer of religion. We went ahead, embarked on our discussions and now here we are in Europe."

Throughout the morning panel he interacted with specialists of Anthropology, Ecology and Ethology to discuss such topics as human nature, conflict, and climate crises.

The afternoon session focused on perspectives from psychology, endocrinology and neuroscience specifically regarding power.

Panelist Dr. Richard Schwartz, a psychiatrist who works with family systems, suggested that destructive emotions are often the expressions of power and care that have become extreme, concluding, "my message is that we should address our inner enemies with the same care and compassion that His Holiness advocates applying to our external foes."

In his closing remarks for the day, His Holiness concluded, "I appreciate people's taking interest in mind and emotions. This is a good beginning. I mentioned this morning that the real trouble makers are in our own minds. If you have peace within, external problems will not disturb your mind. You may even be able to manage your own pain. When it comes to meditation, analytical meditation, in contrast to concentrative meditation or mere mindfulness, require us to employ our intelligence."

While the first day presenters were mostly scientists, the second day involved more diverse fields. The panel that joined His Holiness in the Henry le Boeuf Hall this morning discussed power and care from the perspective of Spiritual and Religious traditions.

His Holiness opened the morning panel saying, "It's indeed a great honor to be here to participate in these discussions. One of my three commitments is to promote harmony among religious traditions. There is a solid basis for this because they all advance a common practice of love and to protect it counsel tolerance, forgiveness and self-discipline. There are differences in their philosophical views, the existence and role of a creator or the conduct of non-violence, for example, but all support the practice of love. These different views appeal to people of different dispositions at various times in various place.

"Since the September 11th event I have defended Islam. It's clear that if a Muslim commits bloodshed, they are no longer a proper Muslim. It's a mistake to casually refer to Muslim terrorists or Buddhist terrorists, because those who engage in terrorism are no longer proper proponents of their faith. I've learned this from Muslim friends and confirmed it in discussion with Muslim scholars.

"Among followers of spiritual and religious traditions we need to reach out and make contact with each other. This includes even those described as fundamentalists, because we are all equally human beings."

The afternoon session focused mainly on economics, with panelists including both economists and activists, one of which was Firebrand activist and fellow Nobel Peace Laureate Jody Williams, who took up the theme quoting His Holiness and Archbishop Desmond Tutu as stating that men have made a mess and it's time for women to step up. She talked about Peace Jam, a movement to encouragement young people to seize the future. She said she felt people needed to know that they have human rights, but they also have human responsibilities.

"We all have power which we choose to exercise or not," she declared.

Closing the day's session poignantly, His Holiness asserted, "each of us has a responsibility to make change work, please think about what contribution you can make."

The third and final day of the panel commenced mainly on the topics of war and peace. Long term peace activist, Scilla Elsworthy, opened the session, explaining that for years she has talked to people participating in nuclear weapons programs at every stage. She said she'd also talked to people who put themselves at risk to protect others, people who know how to prevent war. She pointed out that our weaponry is defunct. The major threats humanity faces today such as climate change and the gap between rich and poor do not respond to either our possession or use of weapons.

In response to the presentation, His Holiness agreed, saying that "what people need to do, is to make it impossible for politicians not to act. And once nuclear weapons are gone, we can pay attention to the elimination of offensive conventional arms. Human beings have common sense and their basic nature is compassionate. I believe we can achieve a demilitarized world through education and increased awareness."

The audience signaled its enthusiastic approval of both Dr Scilla Elsworthy's presentation and His Holiness's subsequent remarks with rousing applause.

After lunch, His Holiness drove out to the Brussels Expo on the edge of the city, where 10,000 people gathered to hear him speak about 'Individual Commitment and Global Responsibility.' Mind & Life Europe Managing Director Sander Tideman welcomed him to the stage and requested two distinguished guests, Speaker of the Parliament of the Brussels-Capital Region, Charles Picqué and Speaker of the Flemish Parliament, Jan Peumans to introduce the event.

His Holiness began on the topic of compassion. "Sometimes people consider the practice of compassion as a sign of weakness—wrong. It's anger that is a sign of weakness, while affection is a sign of strength. Similarly, some people suspect that compassion only results in others' benefit—wrong. We are the first to benefit from developing warm-heartedness and compassion. It brings peace of mind, which gives rise to self-confidence. This enables us to do what we do transparently, and brings us more friends. Friendship depends on trust and trust blooms when we show real interest in the well-being of others.

"Modern education is inadequate because it is oriented towards material goals leading to a neglect of inner values, basic universal values. If we employ our intelligence we can strengthen such values, so my first commitment is to promoting human happiness by such means."

Finally, His Holiness answered a series of questions from the audience and addressed the Tibetan community in Brussels and the nearby regions. He declared that during their 57 years in exile they had preserved their Tibetan identity and are acknowledged as a distinct people. He reminded his listeners that many who helped and employed Tibetans did so recognizing their high moral standards. His Holiness remarked that on occasion these have begun to slip and counselled them all to make an effort to sustain their good reputation.

Wrapping up the long and formative three-day panel in Brussels, His Holiness flew to Paris for other engagements on the 12th of September.