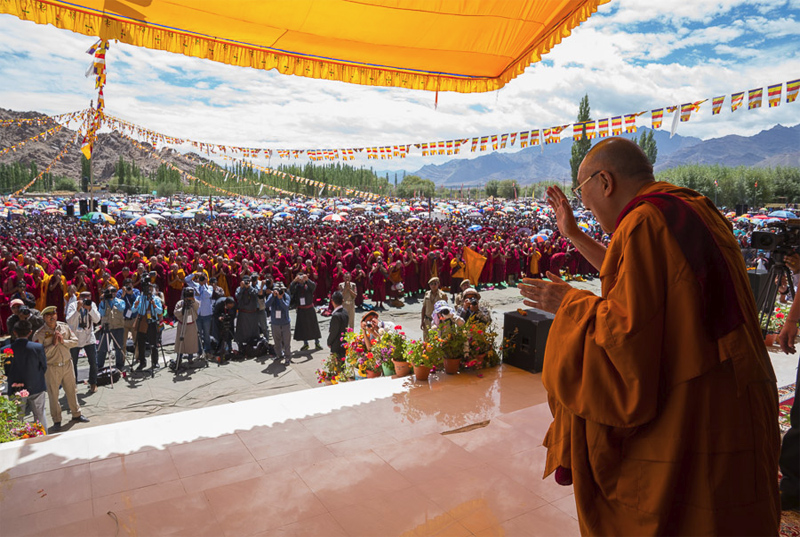 Leh, Ladakh, J&K, India — Saying that he has been working to promote religious harmony for the past several decades, His Holiness the Dalai Lama told the congregation he was pleased to see that religious harmony flourishes in Ladakh.

His Holiness returned to the Himalayan hill town of Dharamshala on Thursday morning. Thousands lined the streets of the hill town to give a warm and hearty welcome to him, following a month-long visit to Ladakh, from 25 July – 22 August 2016.

On his arrival at Gaggal Airport in the morning he was received by Sikyong Dr Lobsang Sangay, Speaker of Tibetan Parliament-in-Exile Khenpo Sonam Tenphel and officials and representatives of the Tibetan NGOs.

The Nobel Peace Prize laureate concluded his teachings in Ladakh on Wednesday declaring that since he first visited Ladakh in the mid-1960s he has found the people to be devout and attentive to his advice. Therefore, he has been pleased to return year after year to serve the people and the teachings of the Buddha. Consequently, responding to requests he has already received he plans to visit Nubra and Thorthuk next year.

Beautiful performances of dancing and singing with traditional music in colorful traditional Ladakhi dresses were performed at the luncheon in honour of His Holiness the Dalai Lama on August 24, 2016.

"The song and dance performances we have just been entertained by were offerings to listen to. The traditional costumes worn by the artists were offerings to be seen. But this lunch provided by the Ladakh Buddhist Association (LBA) is an offering of something to smell and taste and that's what I'm looking forward to!" and everybody laughed.

"This is not a political gathering, it's of a spiritual nature involving the teacher-disciple relationship between you and me. Although I have the title "Dalai Lama", it's just a convention we have created. I don't consider myself as anything special. The fact is that I am a Buddhist monk, who has studied the Three Collections of the Buddha's teachings, and who has for a long time put the Three Higher Trainings into practice. So what I always remember is that I am a Buddhist monk and a follower of the Nalanda masters.

"You have arranged this farewell lunch in my honour, but the principal offering to your spiritual teacher should be your practice of the Dharma. I have shared what I know and have experienced with you. You should implement what you have understood as your offering of practice to me."

His Holiness mentioned that he has been working to promote religious harmony for the last several decades. "In Ladakh I'm pleased to see that religious harmony flourishes. Still, it is my responsibility to encourage you to put even greater effort into it," he said.

"I'm really pleased to see that not only is the relationship between the Shia and Sunni Muslim communities in Ladakh close, but relationships between Muslims and Buddhists is cordial too. I admire this and have been doing what I can to extend it" His Holiness added.

Recalling the LBA's report of the efforts they have made in cooperation with Muslim scholars and clerics in Kargil to improve understanding and friendship between their communities, His Holiness told them they had done well, and should keep up the good work.

His Holiness enquired about the discrimination the Bedas, the traditional drummers and musicians who play at Ladakhi festivals, have faced. He quoted what the Buddha had said: "In my teaching ancestry and family lineage are not important. The practice of the Dharma is more important than that."

"It is wrong to discriminate against people on the basis of their caste," His Holiness stressed. "Even if it involves longstanding local customs and traditions, these are attitudes we must change through education. In today's world these distinctions are no longer acceptable,' he told the gathering.

It was the final day of His Holiness the Dalai Lama's visit to Ladakh this year, the LBA offered a farewell lunch at Shiwatsel in honour of His Holiness where he had recently given teachings. Senior members of all Ladakh's Buddhist traditions and other dignitaries attended. Reminded that the food was ready, His Holiness remarked, "Of course, the main reason we have gathered here is to eat lunch. Let's enjoy it."