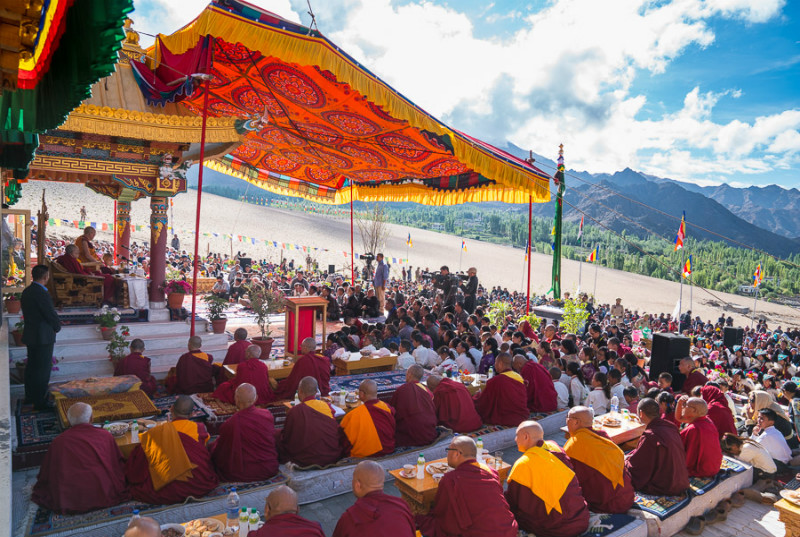 His Holiness the Dalai Lama was warmly received by the Director of the Institute, Geshe Tsewang Dorje, Ganden Tripa Rizong Rinpoche, invited guests, and local people from the village of Saboo, on August 8, 2016.

In his welcoming remarks, Geshe Tsewang Dorjee reminded His Holiness that when the school was founded 11 years ago a group of 25 students was selected from families facing economic hardship. Today, the school has 49 students from all over Ladakh, including Changthang and Zanskar.

Ven Dorjee also said the school, which aims to provide educational opportunities to the underprivileged, will continue to be guided by His Holiness's advice. A group of 5th grade students then recited the 'Eight Verses for Training the Mind'

In his response, His Holiness expressed appreciation of the opportunities the Director and staff of the Institute are providing the students under their care. His Holiness stressed the need for knowledge in the 21st century, said an official post on Tuesday, citing the spiritual leader of Tibetan people.

"As Buddhists," he said, "we need to study Buddhism. We need to use our intelligence to understand what the teachings mean. It's not enough just to rely on rituals and recitations. As human beings, we have a wonderful intelligence, which we should use to the full. However, we must also be careful to use it effectively for the benefit of others rather than causing them problems.

"Many educationalists from the United States, Europe and India have realized that modern education, with its material goals, is not adequate. There is also a need for inner peace. What we need to do is take a more holistic approach to combine an education of the heart with an education of the mind.

"Whether we believe in religion or not, there's no denying the importance of love and compassion. We all began our lives in the shelter of our mother's love and affection. Today, scientists are finding evidence that basic human nature is compassionate and that giving in to negative emotions brings us harm," The Nobel Peace Prize laureate said.

"Despite differences in their philosophical outlook, all the world's major religious traditions teach the importance of love, compassion, forgiveness and tolerance. It's because of this common purpose that religious people should develop respect and admiration for each other."

In conclusion, His Holiness reiterated the importance of education. He presented a statue of the Buddha to the school's French sponsor, planted a sapling to commemorate his visit and posed for a photograph with the students.

His Holiness drove on to the village of Stok, where his first stop was the Siddhartha High School. He was received by the school's founder, Khenpo Lobsang Tsetan of Tashi Lhunpo Monastery. On his way to the podium, His Holiness observed three groups of students engaged in Buddhist philosophical debate.

On behalf of all the staff and students, Director Geshe Tsewang Dorje welcomed His Holiness to the school, remarking that this was the third time they had been able to receive him. He thanked His Holiness for his continued interest and guidance.

In his turn, His Holiness expressed deep appreciation of all those who for years have worked tirelessly at the school, as well as those who have given the school financial support. "We need to work to create a more compassionate humanity. This is not a religious aspiration, but a question of the survival of the 7 billion human beings alive today and to some extent the very survival of our planet," he said.

"We can no longer be short-sighted, thinking only of temporary rewards. We all want to live a happy life and seek to avoid suffering, but unfortunately, a great deal of our suffering is our own creation," he said.

"The violence we see and hear about in many parts of the world today is rooted in our seeing people in terms of 'us' and 'them'. If we don't overcome this way of thinking, it's possible the 21st century will be an era of violence like the century before it. It is time for us to change this." the Tibetan leader said.

"The realistic way to create more peaceful human beings is not through prayer and religious teaching, but through education. We must use common sense to understand the destructive consequences of anger and stress. A sense of concern for others is what compassion means. It's not something sacred; it's a simple sense of concern for the well-being of others, including animals and insects."

His Holiness urged the students to study hard. He commended them for learning about logic and debate, suggesting it would help them in their academic careers. He told them they were the hope for the future and completing a full education would enable them to build a happier world.

At Stok Monastery His Holiness was received by the young reincarnation of the late Bakula Rinpoche, who had earned a Geshe Lharampa degree from Drepung Loseling College before 1959 and later was of great support to Tibetan exiles in India. His Holiness advised the young monk to engage well in his study of the classics.

Entering the main temple, His Holiness paid his respects and took his seat. He asked about the origin of the monastery and what was studied there. The monks replied that it was founded by a direct disciple of Khedrup Gelek Palsang (1385-1438), one of the principal disciples of Je Tsongkhapa (1357-1419), the founder of the Gelug tradition.

They also explained that the monks learn to perform the Preliminary Practices, study the Stages of the Path to Enlightenment, and follow the practice of Vajrabhairava. The fifteen resident monks of Stok Monastery join their mother monastery of Spituk for the bi-monthly monastic Confession Ceremony and when entering the Rainy Season Retreat.

His Holiness advised the monks to study the classic scriptures, as is done in the Tibetan Monastic Institutions re-established in South India, to which Spituk Monastery is sending its monks.

"In the meantime," he continued, "you should start by studying and discussing the Four Noble Truths and the view of emptiness as explained in Tsongkhapa's 'Great Stages of the Path'. Bakula Rinpoche too should study well and not just be content with having the name of a Lama."

The entire populace of Stok had assembled around a newly constructed statue of Shakyamuni Buddha. This construction was mainly funded by Ladakhi ex-servicemen, who proudly saluted His Holiness as he arrived. His Holiness advised the gathering to regard the statue as a reminder of the Buddha's principal teaching: to treat others with love and compassion and keep in mind the interdependent nature of things.

His Holiness also said the first part of that advice is held in common with all other major religions, but the second is unique to Buddhism. He said that as Buddhists training our minds, understanding the dependent nature of things helps us counter our disturbing emotions as we work to achieve the goal of enlightenment.