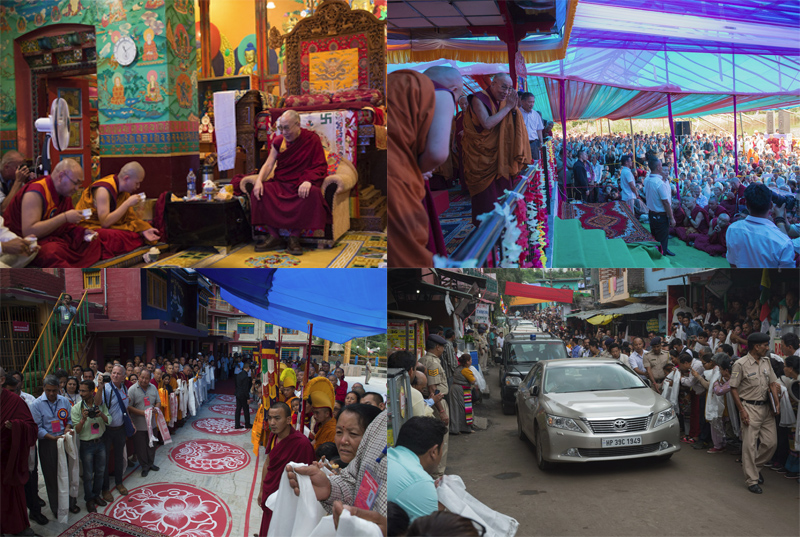 Dharamshala — Emphasizing that all religious traditions, Jainism, Christianity, Hinduism, Islam, Judaism, Zoroastrianism and so forth all teach the importance of love and compassion, His Holiness the Dalai Lama said that "we need to exercise tolerance and forgiveness."

In the twelve year cycle of the Tibetan calendar, the birth of Guru Padmasambhava is customarily celebrated in the Monkey years and this year is a Fire-Monkey year. Tso-pema, a lake in the hills above the ancient royal Indian town of Mandi is also traditionally associated with Guru Padmasambhava and his teaching the Princess Mandarava. Consequently, His Holiness the Dalai Lama accepted an invitation to come here to teach a text by the great 19th century Nyingma practitioner Dza Patrul Rinpoche and give the Rigzin Dhondup empowerment.

"We are here together on this special occasion in this special place with its long-standing Nyingma monastery that was founded by Dudjom Rinpoche. I've been here many times before and I'm happy to be here again. Tomorrow is the 10th of the 5th month, so we'll offer 'tsog' in the morning and I'll give the Rigzin Dhondup empowerment in the afternoon.

There are extensive, medium and short versions and I thought I would give the medium one. As a basis for that I thought I would conduct and ceremony for generating the awakening mind of bodhichitta and prior to that I'll give the vows of an upasaka and upasaki or lay-practitioner. If you can keep all five, well and good, otherwise take what you feel you can abide by.

"I will also teach Dza Patrul Rinpoche's 'Heart Treasure of the Enlightened Ones'. Patrul Rinpoche was someone who dedicated himself to practising what is taught in the 'Guide to the Bodhisattva's Way of Life', which I myself heard and received from Khunnu Lama Rinpoche. The point of this is that we need to transform ourselves in thought, word and deed, which requires mindfulness, introspection and conscientiousness."

His Holiness was concerned to know how many could understand what he said in Tibetan and whether those who could not had access to a translation. He mentioned that although his listeners would receive a tantric blessing tomorrow, that blessing depends on the profundity of the sutra teachings, an understanding of emptiness. He said that there is no greater text for training the mind than the 'Guide to the Bodhisattva's Way of Life', but that it would be hard to really come to grips with emptiness by studying the ninth chapter of that book without also paying attention to the works of Nagarjuna and his followers.

Remarking that the Buddha's first teaching in Varanasi, the Four Noble Truths, outlined the framework of his teachings, His Holiness said it alluded to selflessness and dealt with the workings of 'samsara' and 'nirvana'. He explained how things come about in dependence on causes and conditions. The suffering of the first truth has a cause, which is the second truth.

If you put and an end to those causes, suffering ceases. His Holiness said that later, when his followers had developed some understanding of selflessness and made some progress in the path, at Vulture's Peak above Rajgir, the Buddha explained the Perfection of Wisdom. The 'Heart Sutra' recited by all followers of the Sanskrit tradition is a concise rendering of this.

His Holiness noted that it's one thing to recite the 'Heart Sutra', but doing so will only be effective if we understand what it means. To do that we have to employ our intelligence. He said that in Buddhist practice compassion is complemented by intelligence in the form of the wisdom understanding emptiness. He added that the Buddha advised his followers to examine what he taught with logic and reason. This was the approach followed by the masters of the great Nalanda tradition.

As rain began to fall again, His Holiness encouraged the audience to squeeze up so that everyone was sheltered under the canopy. In explicitly explaining emptiness, the 'Heart Sutra' describes reality as it is. It states that the Buddhas of the past, present and future attain enlightenment by relying on this perfection of wisdom. However, he reiterated that we do not attain enlightenment just by understanding emptiness; we need to be motivated by compassion and the aspiration to attain enlightenment for the sake of others.

His Holiness said that whenever he is giving Buddhist teachings he likes to give a general introduction to the spiritual life too. He mentioned that as living beings we all want to be happy and indeed have a right to achieve happiness. He contrasted physical and mental pain and pleasure, pointing out how we can transform the way we think of physical pain, if we consider it a catalyst for purifying negative actions. He noted that in viewing others in terms of 'us' and 'them' we make problems for ourselves. On the other hand if we create the causes of happiness, we will not only overcome unhappiness, but we can be a positive influence on those around us. This, he said, is why it is important to help others if you can, but at least to avoid doing harm if you can't.

He emphasised that all religious traditions, Jainism, Christianity, Hinduism, Islam, Judaism, Zoroastrianism and so forth all teach the importance of love and compassion and that to strengthen and protect these practices we need to exercise tolerance and forgiveness. His Holiness expressed appreciation for the ancient Indian tradition of inter-religious harmony. He described that essence of Buddhist teaching as involving the conduct of non-violence and the view of dependent arising.

Taking up the text of the 'Heart Treasure of the Enlightened Ones', His Holiness explained how it begins with a salutation to the Three Jewels. It touches on how to turn away from the preoccupations of this life. It explains how to overcome the misconception of self and alludes to guru yoga in stating that the ultimate lama is the innate mind of clear light. It mentions that some Madhyamakas allow that things have some objective existence, whereas the Prasangika Madhyamakas state that although there is appearance, there is no objective existence whatever. The text goes on to distinguish the views of sutras and tantras as being differentiated not in terms of the object, but in terms of the subjective perspective. Close to the end, His Holiness stressed the advice that summarizes the teaching—'Whatever you do, examine your own mind.'

He said he had received the transmission and explanation of this text from Dilgo Khyentse Rinpoche. Telling his listeners that he would lead a ceremony for generating the awakening mind of bodhichitta tomorrow as part of the empowerment, His Holiness concluded the session today by giving the vows of a lay-practitioner, which belong to the precepts for individual emancipation.

Following the reciting of dedication prayers, His Holiness drove back to the Nyingma Monastery, while the crowd, spilling out of the teaching area, walked clockwise around the lake and completed their circumambulation of it, according to the Office of His Holiness.