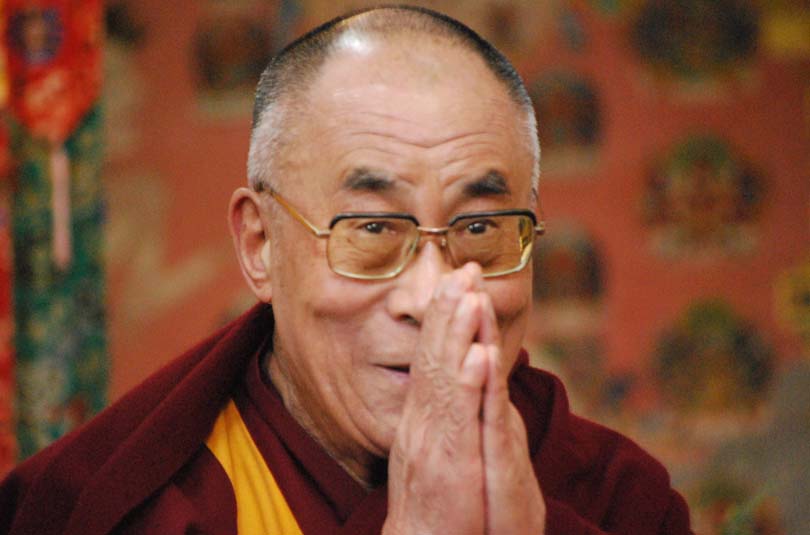 Dharamshala — On the joyous occasion of His holiness the Dalai Lama's 81st birthday, His Holiness gave out some precious pearls of wisdom addressing the listeners as His Holiness' friends and emphasising on interdependence and non-violence in the present day. His holiness urged today's followers of Buddhism to become true 21st century Buddhists since it was an age of technological advance and an age where science was helping prove some principles that had already been set in the ancient world.

The address also discussed some of Bhagawan Buddha's main teachings stressing on how Buddha always urged his followers to assess his teachings with their own experiences and not take any of his teachings on face value, reminding everybody of the greatness and forwardness of Buddhism while also establishing the fact that His holiness in no way meant for people to convert into Buddhism, but that Buddhism had a lot to offer to the world.

Addressing the audience as friends, His Holiness said, "You are celebrating this birthday as my friends. The best birthday gift you could give me, my friends, would be to reflect on the view of interdependence and conduct of non-violence. From a Buddhist practitioner's perspective you need to hear about them; think about them again and again to gain conviction and then, finally, in meditation, put them into practice to gain realisation. In other words, you should combine all three- listening, reflection and meditation- without separating one from the other. That would be the best gift of friendship on my birthday."

His Holiness added, "Then when teaching the Four Noble Truths he explained their sixteen aspects such as impermanence, suffering, emptiness and selflessness in relation to the noble truth of suffering. In other words, Buddhist doctrine entails the Four Seats of the Teaching, the points which distinguish the words of the Buddha: All composite things are impermanent, All contaminated things are in the nature of suffering, All phenomena are empty and selfless, Nirvana is true peace. These statements show the reality of the basis, path and result, which demonstrate how extensive the Buddhist philosophical view is."

The address went on to say, "Amongst the world's many religions, Buddhism has the broadest range of philosophical tenets, the most extensive range of philosophical views. When explaining what these teachings mean the leading Nalanda masters and scholars followed the Buddha's own maxim: O monks and scholars. As gold is tested by burning, cutting and rubbing, you must examine my words thoroughly and accept them only then- not just out of respect for me. The Buddha tells his followers not to accept his words at face value just out of faith and devotion to him. He advises them instead to check whether they hold up in the light of logic and reason. Not only should they comply with logic and reason the Buddha also instructs his followers to compare what he teaches with their own experience to assess their benefit in practice."

"The Buddha stated that only through such means should his followers develop trust and confidence in his teachings and accept them. Among the founders of all the world's spiritual traditions, only the Buddha advised that his words should be subject to reason and logic and [be] experiment[ed] with; not being taken on faith alone. Thus, the excellent scholars of Nalanda followed the path of logic and reasoning to demonstrate the truth of the words of the Buddha. For example, they used reasoning in expounding the Four Noble Truths and their sixteen aspects. Different interpretations of the view of selflessness have given rise to four Buddhist schools of thought- all followers of the same teacher, the Buddha. Their interpretations of the Buddha's words vary according to the profundity of their explanation. This demonstrates the Nalanda tradition's emphasis on the proof through logic and reason."

"Today, I urge that followers of the Buddha become 21st century Buddhists. During the 20th and 21st centuries there has been a huge material development and technological progress, while scientific investigation of reality is ever improving. However the primary focus of scientific investigation so far has been on the material world. Since the last decades of the 20th century and the beginning of the 21st century, even scientists have begun to recognise the role of mind and emotions in pleasure and pain. They recognise that peace of mind is necessary even for physical health. Whether you are a religious person or not, peace of mind is important for your well-being. So scientists have found a new interest in the realm of the mind. At the same time scientists are also paying greater attention to inner qualities like love, compassion, tolerance, contentment, and so forth. Under such circumstances, the ancient Indian understanding of the workings of the mind is very relevant in today's world. In particular, the Nalanda tradition brought to Tibet by the Great Abbot Shantarakshita and preserved well by us Tibetans. Consequently, we are now in a position to discuss and share the vast and profound wisdom of Buddhism with our spiritual brothers and sisters.

"Similarly, sharing our understanding of the workings of the mind could contribute to the well-being of the world at large. We are able to do this because the leading masters of Nalanda expounded Buddhist teaching with precise logic and reasoning. Today, Buddhist philosophical views can be compared to advanced scientific theory. Essentially, Einstein also said something to this effect."

"So, my Dharma friends in Singapore, most of you follow Chinese Buddhist traditions. But you also pay attention to the works of exalted Nagarjuna such as The Fundamental Wisdom of the Middle Way just as we do. There is also the concise Perfection of Wisdom text, the Heart Sutra, which most of us recite by heart. Hence, we share the vast, deep Buddhist teachings derived from the great Nalanda tradition the essence of which is the awakening mind of the Bodhichitta, spurred on by love and compassion, and the view of the emptiness, which supports it. Today, this twofold approach of method and wisdom is beneficial on an individual as well as a wider level. Why is that so? The awakening mind of Bodhichitta, driven by love and compassion, brings peace of mind and peace of mind brings about peaceful individuals and peaceful families. Ultimately, for the whole world to be at peace we must have inner peace. If we lack inner peace and are instead arrogant, jealous and competitive, full of all sorts of emotions and preconceptions, peace in the world will be hard to find. "

Stressing on world peace like always, His Holiness added, "Therefore, a sense of altruism is the foundation of world peace while the view of dependent arising which supports it, is like a scientific concept. Among scientists there are many who are interested in notions of interdependence and relativity, aren't there? So, the conduct of non-violence and the view of interdependence can be of service to the world."

His Holiness concluded, touching hearts, with, "However, I am not saying that everyone should become Buddhist. It would be much better if they continue to follow their own religious traditions. But what I want to suggest to you is how Buddhism can be of service to the world. Of course, my spiritual brothers and sisters, you are already aware of what I have mentioned here. But I have said these things again thinking there's nothing wrong in stressing [on] what is important. Please keep these points in mind. Thank you very much."