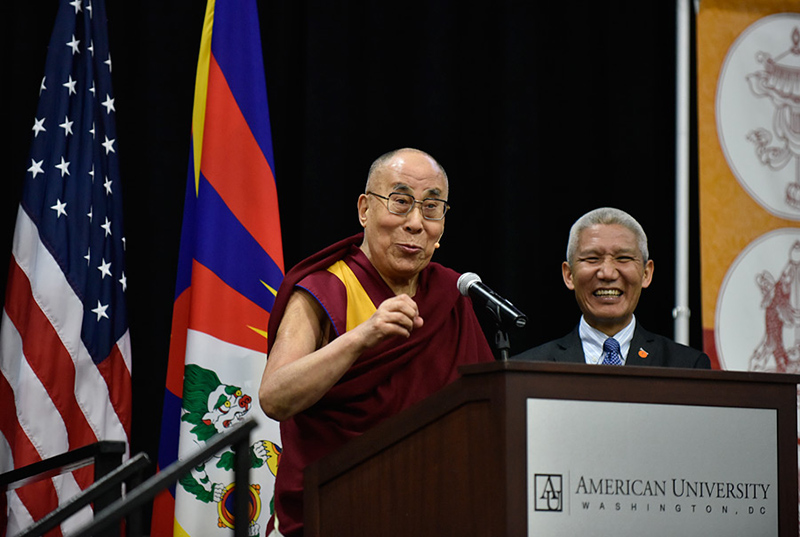 Dharamshala — Describing today's education with its focus on materialistic goals, His Holiness the Dalai Lama calls for more attention on inner values.

His Holiness Dalai Lama reached Washington DC on Tuesday, June 13 for his ten-day long US tour. On the first day of the visit, he spoke at the United States Institute of Peace (USIP) and American University.

In his speech at USIP, following the Orlando attacks, His Holiness calls attention to education as means to attaining peace. "Genuine peace must come from inner peace. It's impossible to find peace if we are full of frustration, suspicion and mistrust. USIP must encourage a change of heart based on a change of awareness rather than a dependence on blessings. Whether we are happy or sad depends directly on our own actions. I know that USIP is committed to creating peace. I believe that to achieve it what we need is education. Today's education with its focus on materialistic goals needs to pay more attention to inner values. If this can be done, we may create a more peaceful world by the middle of this century" he said.

On asked about the current refugee situation, he said "I admire all those countries that are helping them, but simply providing shelter is not enough. The long term solution is to restore peace in the lands these people are fleeing. In the meantime their young people must be given education and training to equip them to be able to help rebuild their countries in due course.

"Life is difficult, but coping with it is much easier if you have peace of mind. One way to achieve this is to encourage a more holistic approach to education that fosters a greater warm-heartedness based on scientific findings, common experience and common sense."

In another meeting, His Holiness observed a moment of silent prayer for the victims of Orlando attack. In the following address, he said "We all have problems to do with fear and anger, but withstanding difficulties is much easier if you have mental strength. In my own case, I lost my freedom aged 16 and then lost my country when I was 24. I faced an array of problems after that, but my mind has remained peaceful.

Adding to it he said "All 7 billion human beings alive today are mentally, physically and emotionally the same. We all have the same potential to find peace of mind. Some people mistakenly conclude that cultivating compassion is all about others' benefit, whereas the first benefit is to us. Compassion brings us peace of mind. It attracts friends. Friends are based on trust and trust develops when we show concern for others. I really admire these young people who came to see me, not only for their interest, but because of the action they have taken in their own countries."

Talking to Tibetans he motivated them to think themselves as the ambassadors of Tibet. He encouraged them to preserve and appreciate their culture and to remember Tibetan Buddhism is derived directly from the Nalanda tradition that hinges on the use of reasoning. This training and not the formal education had equipped him to engage in meaningful talks with scientists for more than thirty years.

He further expounded that the knowledge of how the mind works and the regulation of emotions are something that Tibetans can share with the world. Analyzing whether anger is of any value or whether warm-heartedness is more helpful is an example. He said that while anger may appear to bring energy to bear, it tends to be blind. He stressed once again the importance of education.

He referred to his own devolution of political authority to an elected leadership and his retiring the institution of Dalai Lamas from future political activity in the context of the need to adapt to the modern world.