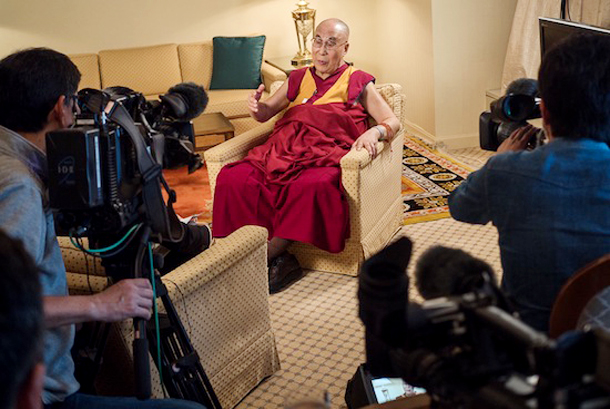 Osaka, Japan — "It is only through non-violence that we can create a positive impact," His Holiness said and urged world leaders to extend more support to non-violent movements.

After arriving in Osaka city in Japan on Monday His Holiness the Dalai Lama gave an almost two-hour long exclusive interview to Mr Makato Oda and Mr Eisuke Takahashi of NHK, one of Japan's largest TV broadcasters.

His Holiness the Dalai Lama emphasised the importance of non-violence and inner values such as love, compassion and morality during the interview. He also spoke about his reincarnation issue, explaining that the continuity of the Dalai Lama institution depends entirely on the Tibetan people.

"As far back as 1969, I have stated that it is up to the Tibetan people to decide whether the institution of Dalai Lama should remain or not. However, these days the Chinese government seem more interested in the issue than myself," His Holiness laughed.

"I find it baffling because the Chinese government's interest in the issue is solely political, not religious. During the Manchu dynasty, Chinese involvement in the issue was understandable because of the religious connection emanating from the priest-patron relationship," said the spiritual leader of Tibetan people.

"However, modern Communist China calls itself atheist. So, they have no business in the issue. That's why I often joke that the Chinese government should first announce the reincarnation of Mao Zedong and others if they really believe in reincarnation," His Holiness added.

Having said that, His Holiness explained that the sustenance and advancement of Tibetan Buddhist culture is not dependent on one person. He recalled that the teachings of Lord Buddha and other ancient Indian masters have flourished even without the institution of reincarnation. He declared continued study and in-depth analysis of the Buddhist scripts as the core essence, which can guarantee effective sustenance.

Expressing his unwavering commitment to non-violence, His Holiness the Dalai Lama said that non-violence should be the only true alternative to resolve a crisis.

"As long as I am alive, I am committed to non-violence. It is only through non-violence that we can create a positive impact," His Holiness maintained, and urged world leaders to extend more support to non-violent movements.

He further extolled education as the key to developing a happier world but lamented the current education system as inadequate when it comes to guaranteeing inner peace. He called for a more holistic education system, which includes inculcating inner values among children to develop a compassionate mindset from infancy.

"This innerness, people should pay more attention to, from kindergarten level up to university level. This is not just for knowledge, but also to create a happy human being, happy family, happy community and, finally, happy humanity," His Holiness said.

From Tuesday, His Holiness the Dalai Lama will begin his four-day teaching on 'A Guide to Bodhisatva's Way of Life' by Shantideva. About 2700 devotees from seven countries including Taiwan, Korea and mainland China will converge at the Osaka International Convention Center for the teachings.

His Holiness the Dalai Lama arrived on Sunday at Narita Airport, Japan where he was welcomed by Tibetans and Japanese-Tibet supporters, including representatives and staff from the Office of Tibet based in Tokyo.