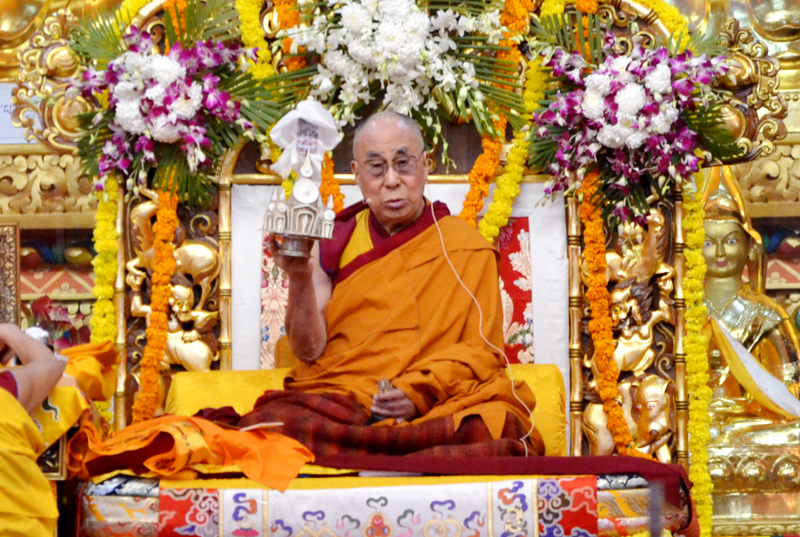 Bylakuppe, Karnataka — Over thirty thousand devotees congregated at the Tashi Lhunpo in Bylakuppe, Karnataka, India, on January 1, at a ceremony to make a long-life offering to His Holiness the Dalai Lama. The spiritual leader of Tibet, in turn, conferred a White Tara long-life empowerment to the gathering.

The Long-Life Offering was organized principally by the Jangchub Ramrim teaching committee, Tashi Lhunpo Monastery and audience from different countries, including Himalayans.

"I've been teaching almost continuously since arriving at Gyumey Tantric College three and a half weeks ago. Today, as a way of dedicating the merit we'll conduct a White Tara Longevity Empowerment. I gather 700 students from local schools have joined us today, I wish you a Happy New Year. Young students like these are very important because they belong to the generation of the 21st century. I and my colleagues belong to the 20th century. Our time has passed and our lives are nearly over. The 21st century generation on the other hand are just at the beginning. They have a realistic opportunity to change the world.

"We all want happiness and to avoid suffering, and within ourselves that involves a greater sense of love and compassion. As far as the external world is concerned it will entail taking serious steps to preserve the environment and adapt to climate change. These days scientists are increasingly finding evidence that cultivating love and compassion has a positive effect on our physical health and general well-being. Humanity is made up of individuals and we will only achieve a happier more peaceful society if those individuals are happier and more peaceful within themselves.

"I am optimistic about this. I believe that human nature is fundamentally positive and again scientists are finding evidence to support this. Experiments with infants, who are too young to talk, and so have limited conceptual thinking, show that they respond favourably to illustrations of people helping each other. They show clear adverse responses to illustrations of people harming or obstructing each other. What's more, scientists have shown that constant fear and anger has a damaging effect on our immune systems.

"We may conclude that human nature is essentially compassionate. Love and affection are essential because we all depend on others to survive. Therefore affection is part of our basic nature. If it was otherwise and it was our nature to be angry and hateful, there'd be little we could do, but because it is our nature to be affectionate and compassionate it's possible for us to think of enhancing these natural qualities through education and training.

"By and large, modern education systems are inadequate because they are focused on material development and pay insufficient attention to inner development, to training in basic human values. However, projects are underway in the USA and Canada, in Europe and also here in India to design curriculums that will incorporate secular ethics into standard education. Steps need to be taken now to implement such changes. If we can inculcate and nurture basic human values in those who are young today, I believe that by the end of the century we will have created a happier more peaceful world.

"Students, work hard, study well and make the most of your opportunities," His Holiness advised.

Turning his attention to Tibetan culture His Holiness remarked that Indian Buddhist literature was translated into Tibetan more than a thousand years ago. As a result, today, Tibetan remains the language best suited to accurately expressing and explaining the Nalanda tradition. He described this as something to be proud of, something which provides access to knowledge that Tibetans can contribute to the whole of humanity. Inner peace is based on compassion, cultivation of which is thoroughly explained in Buddhist science. Meanwhile, many among Tibet's Asian neighbours, such as China where there are 100s of millions of Buddhists, are showing growing interest in the teachings of Tibetan Buddhism.

"The Buddhist tradition may be more than 2500 years old, but instructions such as how to deal with disturbing emotions not only remain relevant today, but are something everyone can benefit from, without needing to be a Buddhist. It is important to remember that all human beings are fundamentally the same. We are all brothers and sisters belonging to one human family. We are born the same way and we die the same way. And yet instead of appreciating what we have in common, we tend to stress those differences between us, such as faith, nationality, whether we are rich or poor, educated or illiterate, which are of secondary importance. We see each other in terms of 'us' and 'them', which in terms of the interdependent world in which we live is not only unrealistic, it's out of date.

"If, we adopt a more affectionate, appreciative and concerned attitude towards each other, our lives will become more meaningful. If we can contribute to the happiness and prosperity of the whole world, it will be worth leading a long life.

"Of course, there are simple physical factors that can contribute to longer life. One is basic hygiene. Another is that while you have good hospital facilities, you don't have enough qualified medical staff working in them. This is like the schools that need more qualified and dedicated teachers.

"You need to keep up your health. Take proper advice about diet and the importance of nutritious food. Eat less white rice. Take more exercise. Do circumambulations as you say your prayers. It saddens me to see knowledgeable students and teachers in poor health. Receiving blessings and performing rituals won't solve this; you need to adopt more practical steps. Taking urgent care of your health is the most important aspect of ensuring you live a long life. Of course, as I've already said, inner peace and less stress have a beneficial effect on your physical well-being too."

Returning again to the topic of education, His Holiness discussed whether it would not be better to refer to a teacher with Buddhist training as a philosophy teacher rather than as a religious or spiritual teacher. He cited the quotation he often repeats about the Buddha's not washing misdeeds away with water, but revealing the path to liberation. A philosophy teacher should be able to explain the Two Truths, the Four Noble Truths and what the Three Jewels are. He or she should be able to explain what the Buddha represents and what he taught.

Before beginning to give the White Tara empowerment, His Holiness set the context. "Here we are in Tashi Lhunpo founded by Gendun Drup, the First Dalai Lama. He had a special connection to White Tara and I feel especially fortunate to be able to give this empowerment today," His Holiness said.

Ling Rinpoche, patron of the Jangchub Lamrim teachings, recited the eulogy and requests during the main mandala offering. He recalled the kindness of Dromtönpa, Gendun Drup and all the Dalai Lamas, including His Holiness, to Tibetans. Representatives of five Tibetan settlements in South India offered their own prayers to His Holiness to live long. Another mandala offering was made by the Tashi Lhunpo Abbot and Zopa Rinpoche.