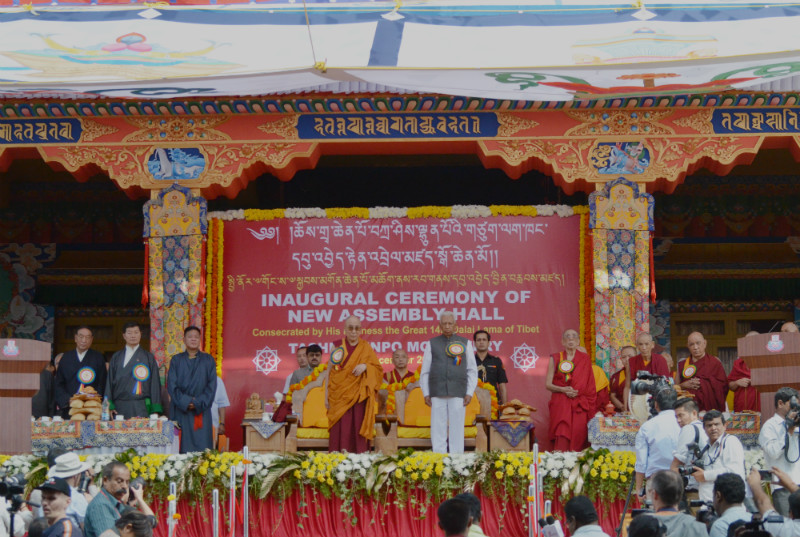 Dharamshala — Tashi Lhunpo Monastery, the seat of the Panchen Lama and one of the 4 Great Monasteries of Tibet, has risen again as His Holiness the XIV Dalai Lama consecrated the prayer hall during a ceremony attended by thousands near the Tibetan Refugee camp of Bylakuppe.

Among those dignateries in attendance were Shri Vajubhai Rudabhai Vala, Governor of Karnataka; head of the Gelug School, His a Eminence Gaden Tripa; Sikyong Dr Lobsang Sangay, Prime Minister of the Tibet Government in Exile; and Mr Penpa Tsering, Speaker of the Tibetan Parliament in exile.

In his address, His Holiness the Dalai Lama emphasized the importance of preserving the Tibetan culture, saying "In exile, it is our responsibility to preserve our culture - the spoken and written Tibetan language as well as Buddhist traditions.

His Holiness expressed the important of engaging in the study of the Dharma. He said that while Buddhism spread the length and breadth of Tibet, the public were still not very educated. "Because we need to be 21st century Buddhists, with an understanding of what the Buddha taught, we have to promote more education. All religious traditions are good since they help people. China, Korea and Japan also follow the Nalanda tradition, but it's only among Tibetans that you will find the kind of rigorous, detailed study that we follow in our centres of learning.

"Now, we need more people capable of communicating that knowledge to others. In India and elsewhere interest in Buddhism is growing," His Holiness said, "We've maintained our culture of compassion and non-violence alive for more than a thousand years and keeping it alive now is our priority. We set up schools in the settlements so Tibetan children could receive both a modern and a Tibetan education. Over the years the results have been good."

As Shri Vajubhai Rudabhai, the Governor of Karnataka arrived at the monastery, the crowd cheered and applauded, in order to welcome him. Rudabhai was the Chief Guest to the event.

His Holiness expressed his respects to the Governor, monastics and other distinguished guests. "In the 1960s, Pandit Nehru, the Prime Minister, wrote to the various state governments asking if any could provide land for Tibetans to settle on. The most fulsome response came from the then State of Mysore and its leader Mr Nijalingappa," His Holiness said, adding: "We began settlements at Mundgod, Kollegal and here at Bylakuppe. We will not forget the kindness of Karnataka and remember Nijalingappa in our prayers."

"We've maintained our culture of compassion and non-violence alive for more than a thousand years and keeping it alive now is our priority. We set up schools in the settlements so Tibetan children could receive both a modern and a Tibetan education. Over the years the results have been good," he said.

"Tibetan Buddhism, with its roots in the Nalanda tradition, is the most comprehensive Buddhist tradition today. And although the practice of Buddhism is really only of interest to Buddhists, the traditions of logic and epistemology, as well as the science of mind, can be of interest to everyone. Several of our great seats of learning have been re-established here in Karnataka, with Sera, Tashi Lhunpo and Namdroling Monasteries here in Bylakuppe," he added.

"I'd like to thank the Governor again for coming here today and for the concern you have shown for the young Panchen Rinpoche."

The Tashi Lhunpo Monastery presented His Holiness with a special statue made of sandalwood of Gyalwa Gendun Drub, along with a conch-shell ornament and a gold-encrusted memento as a mark of gratitude and on the auspicious 80th birth anniversary celebrations in Bylakuppe.

Addressing the special event, Governor Shri Vajubhai Rudabhai praised the 10th Panchen Lama, who worked his whole life for the cause of Tibet and the Tibetan people.
"At the same time I regret that the Panchen Rinpoche is not here with us. He has not been seen since His Holiness announced his recognition in 1995. His predecessor, the 10th Panchen Rinpoche was someone who had worked tirelessly for the welfare of the Tibetan people.

"I'm happy to know that many students from the Himalayan regions have been made welcome here at Tashi Lhunpo. I want you to know that we Indians are always with you, Tibetans and Indians have to work together.

"Tibet will be free, and you have to keep up your non-violent approach just as Gandhi-ji did for us. Never lose heart; never lose hope," he said, adding: "I believe that one day, Tibetans will be able to return to their homeland, through means of non-violence struggle." 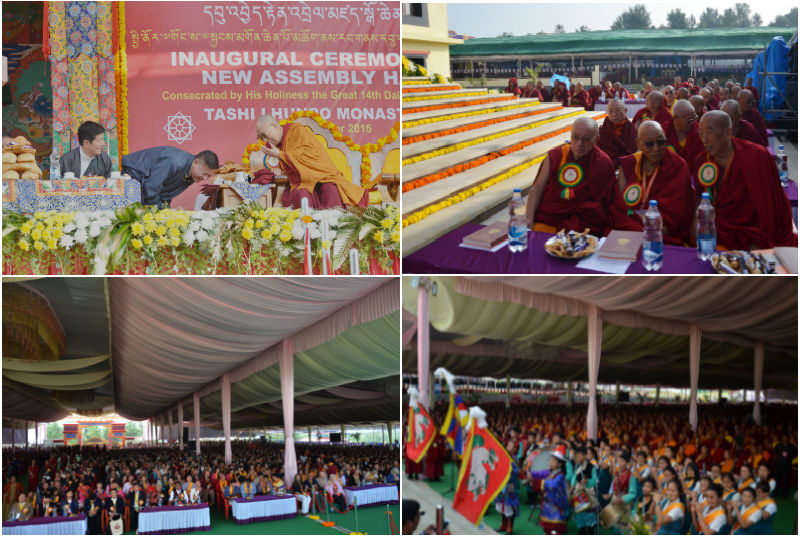 In his speech Sikyong Dr Lobsang Sangay paid his respects to his fellow guests and congratulated the Monastery on the achievement of re-establishing itself and building this new hall. "All the four great monasteries of the Gelug tradition, including Tashi Lhunpo Monastery, have been rebuilt in India," he said, adding that 'many monasteries in Tibet suffered great destruction at the hands of the Chinese.'

He paid tribute to the 11th Panchen Gedhun Choekyi Nyima, who has not been seen since he was recognised by His Holiness. He said the CTA takes every opportunity to call for his release. He drew attention to the long-standing historical connection between Tashi Lhunpo and the people of the Himalayan region. The Speaker of the Tibetan Parliament in-Exile, Mr Penpa Tsering also offered his congratulations.

The Abbott of Tashi Lhunpo, Khen Rinpoche Kachen Lobsang Tsetan, gave a stirring speech expressing his gratitude to His Holiness for all the moral and financial support which has led to the completion of the project.

He pointed out that the statues in the new Assembly Hall were consecrated by Ganden Tri Rinpoche according to the rituals of 13 Deity Vajrabhairava. He also declared that with regard to the malignant spirit Dolgyal, Tashi Lhunpo, its monks and supporters have no connection with it whatsoever. What's more, there are some in the guise of monks who have, particularly in Tibet, sought to propagate this bad practice in the name of the Panchen Rinpoche. He said, "We forthrightly oppose them."

He added that Tashi Lhunpo supports the Middle Way Approach. While thanking all the guests for coming, many of them from distant parts of the world, the Abbot concluded with the wish that His Holiness the Dalai Lama and the 11th Panchen Rinpoche, Gendun Chökyi Nyima live long and healthy lives.

The work to restore the monastery will continue, said Rinpoche, with the well being, care and education of the monks being the highest priorities. Rinpoche shared that "This Assembly Hall is unique and special in that it was designed to,look as much as possible like the halls of the Tashi Lhunpo Monastery in Shigatse." There is a museum located on the first floor of the building named Gyawa Yabsey Nyi which contains photographs of the Dalai Lama and the Panchen Lama. "Tashi Lhunpo Monastery, on behalf of Tibetans and supporters everywhere dedicates this museum as an expression of our collective gratitude for the combined activities oft he two great masters of Tibet, " said Khen Rinpoche.

Rinpoche closed his speech by saying' " And finally, we pray for His Holiness the Dalai Lama's long life, for the 11th Panchen Lama's swift release and rightful return to Tashi Lhunpo, for the quick resolution of the Tibetan issue, and for the peace and happiness of all living beings."

To mark His Holiness's 80th birthday this year and as a token of gratitude, the Monastery presented him with a delightful sandalwood statue of Gyalwa Gendun Drup, a gold coin and a conch shell ornament.

His Holiness also opened a museum at Monastery, which houses a photographic exhibition documenting the lives of His Holiness the 14th Dalai Lama and the 10th Panchen Lama, through the launch of a pictorial book-highlighting the special relationship they share and their contributions towards the people of Tibet.

In the 1970s a few Tashi Lhunpo monks re-established the Monastery here in Bylakuppe. Since then, due to His Holiness's kindness and with the support of the Dalai Lama Trust, all the traditions of Tashi Lhunpo have been completely restored. The Gyalwang Karmapa Ogyen Trinley Dorjee has been unstinting in his interest and support too.

The event featured the Tibetan Opera Performance of the Tashi Shoepa, also known as the long life dance, the playing of the Tibetan national anthem by students from the Tibetan Children's Village, exchanges of gifts and speeches by the dignitaries that emphasized that efforts should be made to preserve the Tibetan culture and way of life.