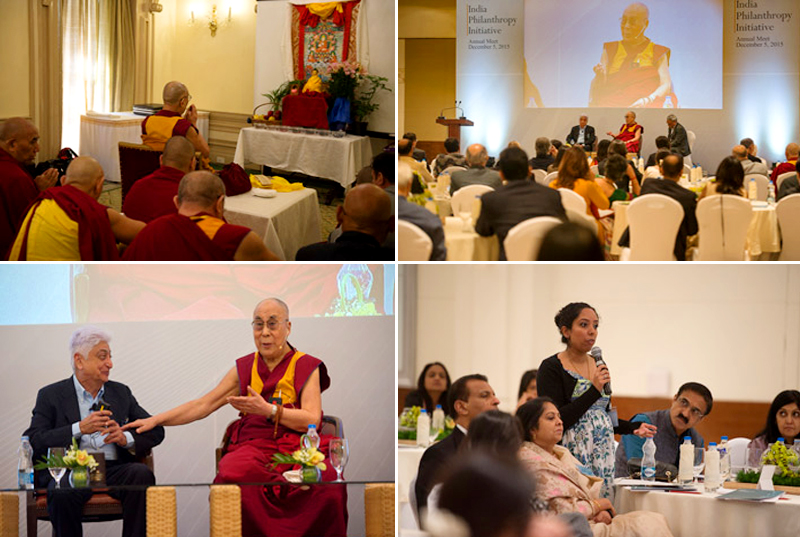 Bangaluru, Karnataka — The spiritual leader of Tibet His Holiness The Dalai Lama said warm-heartedness is essential if we are to live happy lives and called the 21st century an era of dialogue, seeking mutually agreeable solutions.

Arriving in Bengaluru city from New Delhi Sunday, His Holiness was welcomed by Tibetan representatives, including a delegation of abbots and senior moinks while costumed dancers performed on the forecourt, Ling Rinpoche was also among the well-wishers.

As Sunday marked Ganden Nga-chö, the anniversary of Je Tsongkhapa's passing away 596 years ago, His Holiness had agreed to take part in prayers with a group of Abbots, former Abbots and senior monks.

They sat before a thangka of Je Rinpoche in a room in the hotel named the 'House of Lords'. Chanting in crisp unison, they recited Tsongkhapa's 'Praise for Dependent Arising', 'Destiny Fulfilled' and his 'Secret Biography' by Jamyang Chöjey Tashi Palden, founder of Drepung Monastery, concluding with praises to Mahakala, Dharmaraja and Mahakali.

His Holines explained his plans over the coming days. "Now we should follow the example Je Rinpoche set and shun the path of the eight worldly concerns."

His Holiness was also greeted by a group of Indian Guides and Scouts who presented him with a Scout scarf. He told them that whether the world in future becomes a happier, more peaceful place or not will be in the hands of young people like them.

Afternoon, His Holiness attended the fourth meeting of the Indian Philanthropy Initiative at the invitation of Azim Premji, the noted entrepreneur who led Wipro to widespread success and who was the first Indian to sign up for the Giving Pledge initiative started by Microsoft founder Bill Gates and billionaire investor Warren Buffett. Introducing His Holiness to what he described as a larger turn out than expected, he said the theme was empathy and kindness and invited him to address them.

"I always start my talks by greeting my brothers and sisters," His Holiness began. "Basically we are all the same human beings. We're born the same way and whether we are religious leaders, kings and queens or beggars and AIDs patients we all go the same way. We all want to live a happy life; we wish to be undisturbed and we all have the same right to achieve happiness.

"When we are young as children we are unconstrained. As long as children are surrounded by affection, they are content; they pay no attention to nationality, race, faith or social status. As we grow up, these things come to concern us more; we focus on such secondary differences between ourselves and others. Meeting someone influential we smile, but in a calculating way, banking on what we might gain. Children don't behave like that."

His Holiness spoke of the many man-made problems we face, citing the kind of violence he has witnessed throughout his life from the Sino-Japanese conflict of the 1930s through to the Vietnam War and other conflicts today. He said that in the interdependent, globalized world in which we live now, the notion that one side might win a victory marked by the complete defeat of the opposing side is a sign of old ways of thinking in the face of a new reality. He said we have to find another approach, proposing that the 21st century should be an era of dialogue seeking mutually agreeable solutions.

"I'm committed to the idea that all 7 billion human beings are equal and that if they are happy, I'll be happy. We need the determination that arises from compassion and respect for others' rights. We have a responsibility to bring an end to the gap between rich and poor, in which context we have to recall that we are all the same as human beings."

He told the story of meeting with people living in Soweto, South Africa, after the end of apartheid, and speaking admiringly of the opportunities of their new found democracy. He was dismayed to hear a teacher lament that black Africans could never achieve what whites had done because their brains were inferior. His Holiness described arguing and cajoling him to understand that there were no such differences, that as human beings we are equal, and his relief when with a long sigh the teacher conceded that perhaps we are all the same.

His Holiness suggested that to help the poor, the wealthy should create opportunities, providing educational facilities and equipment. However, he said that the poor in turn have to work hard and develop self-confidence. He remarked of Azim Premji:

"He is already taking such practical steps through his educational foundations, while I only talk."

He said: "When there is a lack of concern for others, corruption and exploitation flourish. There is a growing consensus that in some aspects our current education systems are inadequate. We need to change that. In the past we relied on religious faith for ethical guidelines and human values. As a multi-religious nation, India drew up a secular constitution, secular in the sense of respecting all religions equally and even according respect to the views of those who have no faith. This is very relevant today, when out of 7 billion human beings, 1 billion declare they have no faith. They need ethical principles too. So we need to find ways of providing education and training in ethics that accord with scientific findings, common sense and common experience."

"If you live your life honestly and truthfully, you'll be open and transparent, which leads to trust. And trust leads to friendship. This is something important to note, that the basis of friendship is trust not money. Warm-heartedness is essential if we are to live happy lives."

He explained that steps are being taken to draw up a curriculum to teach moral values from a secular point of view, from kindergarten to university. He offered to share it with whoever is interested when it is completed in the New Year. He returned once again to his praise of India as a living example that people of different religions, different cultural traditions and speaking different languages can live peacefully side by side.

While expressing admiration for India's longstanding traditions of fostering inter-religious harmony and non-violence, His Holiness was also full of praise for ancient Indian psychology. He declared that it was highly developed and has much to teach us today; suggesting that studying it could lead to a map of the emotions that would contribute to an emotional hygiene to correspond with physical hygiene. Although he feels many modern Indians have lost touch with their ancient heritage he quoted a 15th century Tibetan scholar saying that although it was a land of snow Tibet was dark. Not until the light of knowledge came from India did Tibet become bright.

In answering questions from the audience His Holiness mentioned the importance of a pride and self-confidence that is not arrogance. Similarly, he distinguished between the kind of healthy competition intent on success and reaching the top along with your competitors for the general good and unhealthy competition in which you want to defeat your competitors so only you succeed. Once again he commended honesty and truthfulness as ways to overcome fear and anxiety.

Finally, asked to comment on the role of karma he replied that karma means action and action motivated by compassion is good. To complain that what happens to you is just the result of your karma is just lazy. Instead, recalling the Buddha's advice that, "You are your own master," we can change what happens by taking action. He ended:

"When you help others, do so out of respect. Don't look down on them. Serve humanity with compassionate intent. Thank you."