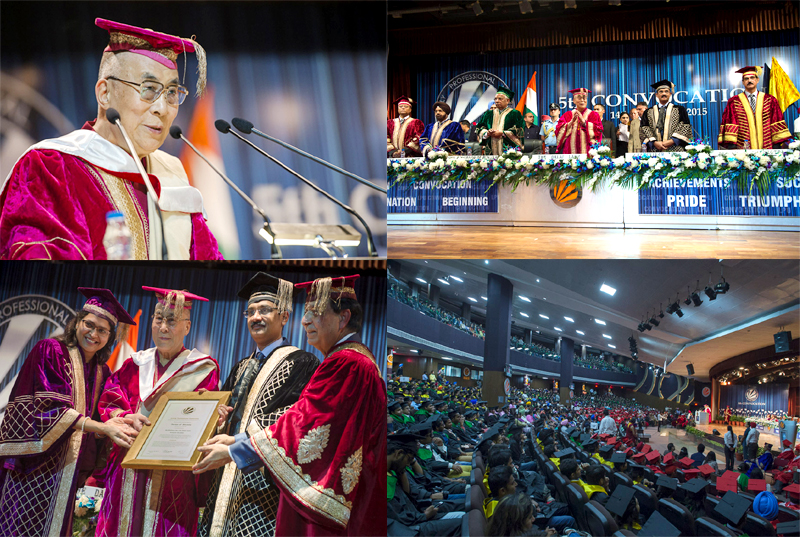 Phagwara — The spiritual leader of Tibet, His Holiness the Dalai Lama honored the 5th Convocation of Lovely Professional University as the chief guest in Punjab, On Saturday, November 14, 2015.

Recipient of a grand traditional Tibetan welcome, including performances by Tashi Shoelpa and Yak dancers, he was also presented with a Guard of Honor led by a sword wielding Sikh officer before whom he took the salute.

Responding to attendees at the press conference, he mentioned his three commitments: the promotion of basic human values and an understanding of the oneness of humanity to further human happiness; the fostering of inter-religious harmony, the preservation of Tibetan culture and the protection of Tibet's natural environment. Amongst several questions he answered one on the Paris attacks too, "Despite its many spectacular developments, the 20th century was also a period of unprecedented violence springing from the idea that problems can best be solved by force. Much of the violence of the early 21st century can be seen as spilling over from that. However, no wants to face problems. We only want to live a peaceful life, but we need to pursue a systematic programme of education, from KG to university, to bring this about. If we can do this, the 21st century could become a period of peace and dialogue."

Speaking briefly to the Tibetan and Bhutanese students, he emphasized on concentrating on "what we have in common, rather than dwelling on the secondary differences between us. As a child we do not care about status, faith, money etc., we only make friends with fellow human beings, this is what I always remind myself."

He shared his journey from labor for Tibetan affairs when he was 16 to when he relinquished political responsibility when he retired in 2011. His Holiness advised that it is not necessary to be a monk or nun to study Buddhist philosophy and encouraged them to take an interest in logic and knowledge. Furthermore, he encouraged the students to cultivate warmheartedness and live an ethical life.

His Holiness later joined the Governor of Punjab, Haryana & Chandigarh, Kaptan Singh Solanki to take part in the academic procession.

During his address to the audience, His Holiness said, "we are all the same as human beings, mentally, emotionally and physically, which is why it is important that we acknowledge the oneness of humanity. We all experience pleasure and pain. We all want to lead a happy life and indeed we all have a right to do so. We have to consider that we all belong to one human family. On that basis there is no ground for enmity between us, no room for killing, bullying or exploitation. There is no ground for looking down on others, because we are all equal as human beings. If we give in to our destructive emotions we only think of ourselves. We should feel fed up with the violence and killing going on around us. If a human being is killed by an animal, it's sad, but if a human being is killed by another human being it's unthinkable. We have to make a special effort to think of each other as fellow human beings, as our brothers and sisters."

Sharing his times with text books and commending the completion of their degrees, he told the students,"I'd like to thank you for inviting me here and for bestowing on me this Honorary Doctorate, particularly as I haven't done the study to earn it, unlike your degrees that you've earned as a result of your own efforts. Of course, I have studied in my own way. I began to memorize texts at the age of 8, but I am something of a lazy student and I only studied because my teacher kept a whip to impress me with. I began to study out of fear, but as I studied more I eventually developed a genuine interest. We have this marvelous brain and it is immensely important that we learn to use it to the full.

"What we need," His Holiness declared, "is a sense of secular ethics. Secular in the sense that it is understood here in India of respect for all religious traditions and even for the views of those who have no faith."

Reinstating his faith in the carriers of baton of the 21st century, he suggested students to channelize negative emotions for constructive and well intentioned tasks. He ended by suggesting the audience to lend his words a thought and "remain warm-hearted, always".