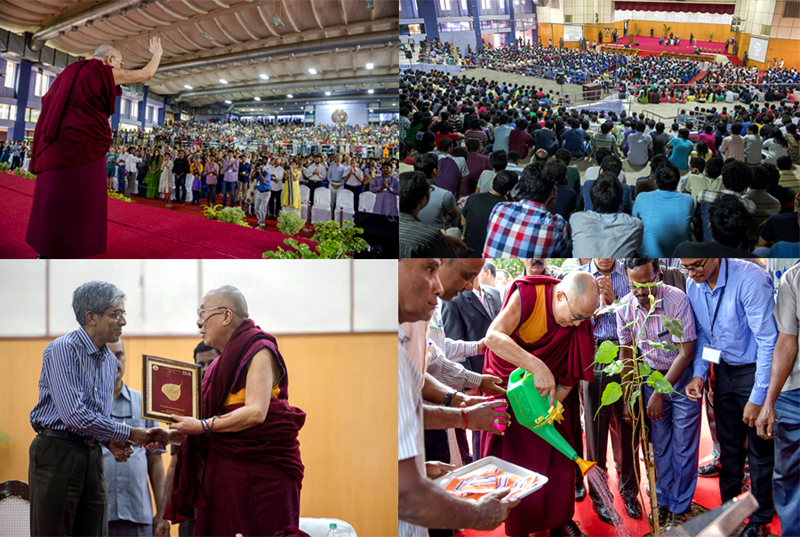 Chennai — As part of their Extra-mural Lecture series, over 3,000 students listened to the spiritual leader of Tibet His Holiness the Dalai Lama deliver a stirring message of compassion and forgiveness in the Indian Institute of Technology Madras on Tuesday, November 10, 2015.

"It's a great honour for me to meet with students of this famous institution. Nevertheless, whenever I meet other people, I think of myself as just another human being. Still, in the Buddhist teachings it is explained that we all have Buddha-nature, the seed of Buddhahood within us," His Holiness said.

"Scientific research has shown that basic human nature is compassionate. Infants, even before they can talk, can be seen to respond positively to images of people helping each other and to shrink from images of people hindering each other," he said, adding that "meanwhile medical research has found that constant fear and anger damages our immune response, so cultivating a more affectionate, compassionate outlook is of direct benefit to our physical health."

"Buddhists also talk about consciousness in terms of different levels of subtlety. The normal waking state with sensory input is relatively coarse. The dream state is subtler, while the state of deep sleep is yet subtler than that. Consciousness when we faint is very subtle, but the subtlest is the consciousness that remains at the time of death.

There are individuals who, focussing on that subtlest consciousness, are clinically dead. Their brains have stopped and yet their bodies remain fresh. This is a phenomenon that some scientists are beginning to research. That subtlest consciousness remains pure; it is not obscured by destructive emotions. That is the Buddha nature, the essence of enlightenment."

"Since basic human nature is compassionate, the disturbing emotions that lead us to kill, harm and exploit others are due to secondary factors. And the fact that human nature is positive is a source of hope. It is on the basis of this that I believe that if we make the effort, with vision and self-confidence we can make this 21st century an era of peace and compassion, an era of true happiness."

His Holiness remarked that although the 20th century was a time of tremendous development and progress, it was also a period of great bloodshed. He said that sadly some of that violence has spilled over into this century. By way of contrast, India has a long-standing tradition of ahimsa or non-violence and a system of secular ethics, values that reflect respect for all religions and even the views of those who have no faith.

His Holiness the Dalai Lama also reiterated his three commitments, namely to promote basic human values, such as warm heart; to promote inter-religious harmony and to work for Tibet.

"Firstly, as human beings we are all the same, physically mentally and emotionally. We all want to live a happy life, and we all have a right to do so. But we are all subject to emotions. My first commitment is to promote the oneness of all human beings, on the basis of which there are no grounds for killing or exploiting others. Climate change and the global economy are two things no longer limited to national boundaries. Instead they encourage us to consider that we all belong to one human family. You young people who belong to the 21st century are the generation who can build a better world, but you'll need a sense of responsibility, determination and vision."

His Holiness then discussed why the Buddha appears to have taught different things to different groups of people at different times. He said he clearly wasn't confused himself, nor was he seeking to confuse others. He actually taught according to the disposition and ability of the people who were listening to him. Similarly, our various other religious traditions have different philosophical views but still convey the same message of love. They also acknowledge that the practice of love needs the support of tolerance, forgiveness and contentment. Each of these traditions has the same purpose, but takes a different approach to it.

"I usually describe myself as a messenger of India, because I promote ahimsa and inter-religious harmony. I also call myself a son of India, because the knowledge that fills my brain all originated with the Nalanda tradition. What's more, for the last 55 years my body has been sustained by Indian rice, dal and chapatis.

"My third commitment relates to my being Tibetan. 95% of Tibetans in Tibet place their trust and hope in me, so I have to do what I can for them. These days I've resigned my political responsibility, but I am concerned about the natural Tibetan environment. A Chinese expert observed that since the Tibetan plateau is as important as the North and South poles, he referred to it as the Third Pole. One crucial issue is that while political changes can be effected overnight, any damage done to the Tibetan environment will take a long time to restore. As it is, North India and Central and South-east Asia depend on Tibet's rivers, with a billion people relying on them for their supply of drinking water. And just as our river waters are crucial to others, our culture of peace, compassion and non-violence is also worth preserving."

Among prepared questions from the students, His Holiness was asked how to distinguish dedication from attachment in relation to work. He replied that it all depends on your motivation. If you are essentially selfish, it will be attachment that arises. The next question was whether His Holiness was disappointed when foreign leaders decline to meet him. He responded that he always considers engaging with the public to be most important. Change in humanity begins at the grassroots with people like those he was talking to today. He defined success as leading a meaningful life, which he explained involved bringing happiness and joy to others.

The spokesman for the students said, "We all have some kind of role model to follow; did you look up to anyone when you were young?" and His Holiness answered them, saying,
"My first role model was my mother. She may have been an uneducated, illiterate farmer's wife, but she was really kind. Later, when I began to study, the stories of the Buddha and other masters gave me role models to follow and later it was Mahatma Gandhi."

His Holiness replied to an enquiry about whether a future Dalai Lama could be a woman by explaining that he'd first been asked this by someone from a Paris magazine years ago. His answer then and now was that if it would be more useful then it was quite possible for a Dalai Lama to be a woman. He stressed that he feels more women should take up leadership roles and speculated about whether if more of the world's countries were led by woman, the world might be a more peaceful place.

He told the students his greatest discovery was the correspondence between Buddhist science and modern science. He cited the Indian nuclear physicist Raja Raman telling him that he had found strong resonance between what Quantum Physics has to say and the writings of Nagarjuna that are about 2000 years old.

"Please think about what I have said. If it makes sense to you, try to put it into effect. If it makes no sense then it's ok to forget it," His Holiness appealed to the audience before leaving the stage.

His Holiness met briefly with about 150 young Tibetans who are studying or working in Chennai. "I've met people from all kinds of backgrounds and talked with them. I've had no modern education, but I am well-versed in the Nalanda tradition and that has equipped me to engage in dialogue with modern scientists.

"Mao Zedong had an idea that religion and science contradicted each other. In 1954/5 he told me that he thought I had a scientific mind and remarked that religion is poison. I was embarrassed. I keep in mind the Buddha's advice that if something is useful, use it," His Holiness told them.

"Many scientists have what I think of as a reasoning Buddhist cast of mind. On the other hand a group of Thai Buddhist teachers I talked to told me that when they teach the Four Noble Truths they rely on scriptural authority rather than reason," he added.

"The Chinese also participate in the Nalanda tradition, but don't employ a rigorous course of study as we do. The Nalanda tradition is our treasure. We should study it. It's not enough to leave it to monastics to study; as 21st century Buddhists we should study too. Even though I am 80 years old, I am still a student. I read and study whenever I can. This is something to be proud of."