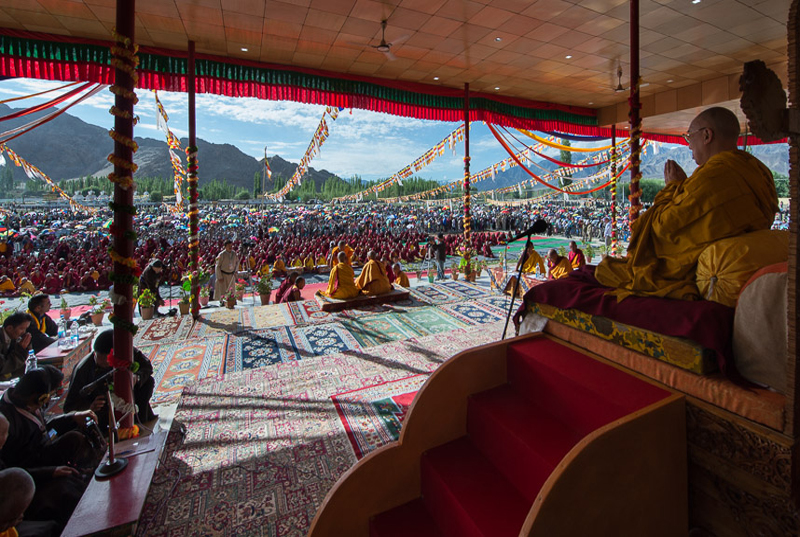 Leh, Ladakh -- As His Holiness the Dalai Lama's two week trip to Ladakh concluded, he once more graced the grounds at Shiwatsel, Leh for a teaching on July 30th, 2015. An estimated crowd of nearly 50,000 filled the grounds to hear His Holiness's teaching and take part in a long life offering.

His Holiness began by addressing all of our lasting searches for happiness. He assured the crowd that while material developments and technology have benefited our lives, it is in fact not the source of our happiness.

"Material development and technological progress have had an impact on all our lives. We have better health, we live longer and we are more comfortable than in the past, but the question is whether we are actually happier. If material development alone really brought lasting happiness, people living in highly developed countries should be completely happy. But this is not so. Many of us still face a great deal of suffering and unease."

He went on to explore the ways in which humans are separate from animals, celebrating the mental capacity that puts us ahead of other animals, in some aspects, while actually detracts from our happiness in other aspects. "Human beings have a special quality of intelligence and discriminative awareness. It is this that has given rise to the progress and material development human beings have achieved. Animals don't have such ability... Another aspect of our human intelligence is our ability to think about ourselves and those close to us, to remember the past and speculate about the future. The result is that we are beset by concerns and worries that disturb our peace of mind."

His Holiness went on to give the empowerment of White Tara, focused on longevity and awakening the mind. With the conclusion of the empowerment, the Long Life Offering commenced, as prominent lamas and over 1000 locals took part in offerings. Notable guests of the ceremony included Ganden Tri Rinpoche, Thiksey Rinpoche, Togden Rinpoche, Bakula Rinpoche and Chöngön Rinpoche in addition to leaders and representatives from the Sunni and Shia Muslim communities and the Christian community.

The ceremony ended with a lunch, where His Holiness donated his personal copy of the Tengyur, the translated collection of Indian masters' treatises, to the Leh Jokhang. He told his guests that he would like to donate his own copy in the hope that in due course the Jokhang may become a library and center of learning.

His Holiness left the next day by plane to Delhi, on his way back to Dharamshala.

His Holiness will be visiting to UK in September 2015. He will give a public talk on Compassion - The Foundation of Well-being at The O2 London organized by the Tibet House Trust.