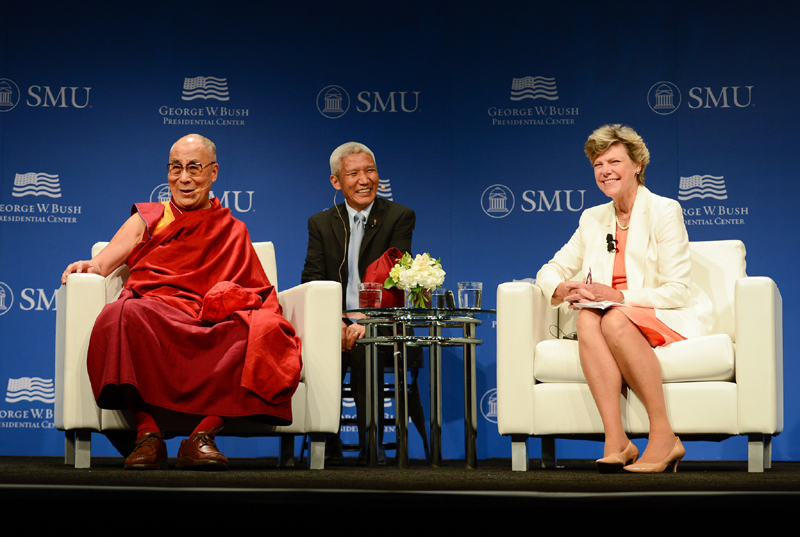 Dallas, Texas, US — The spiritual leader of Tibet His Holiness the Dalai Lama said that President Xi Jinping's remarks in Paris and Delhi give us some sort of hope, saying he even publicly emphasized on the importance of Buddhism in Chinese culture.

His Holiness the Dalai Lama graced SMU's Moody Coliseum in Dallas, on July 1. The event was attended by several dignitaries including Former President George W.Bush and wife, Laura Bush.

"Some Chinese leaders realise that the oppressive policies are counterproductive. These leaders are seriously pondering on how this problem can be solved," answered His Holiness. However he quipped that there still exists many "hardliners" who will not back down from their oppressive policies despite their impractical nature. His Holiness commented on the difference in opinion that often exists between Chinese officials hailing from the same party, which he outlined as the cause for "unpredictability of the closed communist authoritarian" regime.

He said this is "shortsighted, too much emotion. Out of their weakness, I think these people are shy to admit their failure, that is silly."

"Despite the Cultural Revolution, China which has historically been a Buddhist country, has seen the revival of faiths like Buddhism and Christianity. Many are showing genuine interest in Tibetan Buddhism. President Xi Jinping even publicly emphasized on the importance of Buddhism in Chinese culture. This gives us some sort of hope."

His Holiness was ushered in by the former US Secretary of State and President of the Bush Center at SMU, Maddy Spellings who spoke of His Holiness' prolific work over the years and the numerous laurels donned by him.

In his speech addressing the thousands gathered at the event, His Holiness emphasized the need to inculcate and proliferate the values of love and compassion. "As social animals," he said ," we need to harbor qualities of communal love, that bring us together. The self-centered approach,often seen in a modern materialistic world, is animalistic and disregards the community."

He added that discord between religious faiths occurs as a result of wayward individuals who are only concerned with the a secondary level of faith, one that is deluded and away from the core ideas of every religion that preach love, compassion, forgiveness and tolerance.

Answering a question broached about the same by Roberts, following his talk His Holiness the Dalai Lama remarked, "Due to lack of contact, we have remain isolated, each one coming to believe that her/his religion is the single truth. But we must accept the differences and also accept that there are several truths and several religions; although all religions broach the same values of love and compassion. Whether we like it or not we need to live harmoniously."