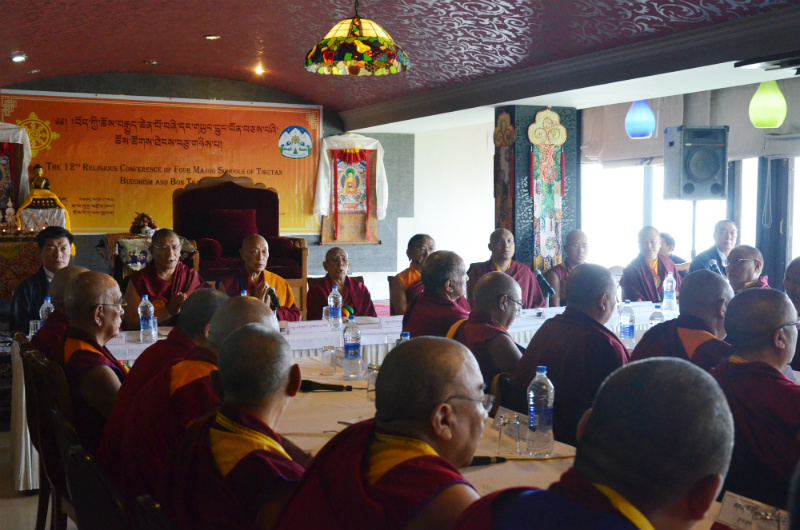 Dharamshala — The three-day 12th biannual conference of religious leaders and representatives of the four schools of Tibetan Buddhism and Bon religion kicked off Thursday morning in the Himalayan town of Mcleod Ganj, Dharamshala, India. The first day began with a minute's silence and prayer service in memory of all those Tibetans who have sacrificed their lives for Tibet.

He also recalled the meeting of diverse religious traditions led by His Holiness the Dalai Lama that was held in New Delhi last year. "Such a meeting would not have been possible without the respect and affection that other religious leaders have towards His Holiness and the values of love and kindness that he espouses," Sikyong said.

Dr Sangay also spoke about the growth of Tibetan Buddhism and Tibetan culture in the world, which he attributed as a direct result of the tireless efforts of Tibetan lamas and religious scholars. "His Holiness is ranked among the most admired leaders in the world. A recent US survey revealed that among 16 world leaders, only Pope Francis and His Holiness the Dalai Lama garner good opinion from the majority of Americans," Sikyong said while highlighting His Holiness the Dalai Lama's great contribution towards the preservation of Tibetan Buddhist culture, and more importantly towards world peace and harmony.

He expressed his his deep gratitude for a fruitful dialogue and said he would welcome all the recommendations and suggestions of the conference to foster greater interaction among the different schools and for the development of Tibetan community as a whole.

Menri Trizin stressed the importance of preserving the four traditions of Tibetan Buddhism and Bon religion. "The most important thing at the moment is to preserve and promote all traditions in Tibet," he said, adding "particularly Bon religion has a very long history and there have been significant developments because of the explicit support from His Holiness the Dalai Lama."

In his address the 17th Karmapa spoke about the need to establish a greater unity among the major religious traditions in Tibet. "The unity is not only about one's public discourse but also should be practical at the individual level by maintaining a good relationship," he said, "It is extremely important to focus the importance of developing and maintaining unity among the traditions, while learning from our past experiences and history."

Sakya Trizin speaks about the importance of finding ways to develop academic studies in Buddhist institutions. "Only Tibet has the most complete presentation of the Buddhist teachings including the systems of both sutra and tantra," he said, "What is important for our discussion is that inspiring as common ground, by encouraging a close relationship relationship with Buddhists around the world."

In his remarks, Mr Pema Chhinjor praised the religious leaders for saying "Buddhism is the only thing that Tibetans can proudly portray to the world and the sole reason why Tibetans are loved by the world."

"Monasteries and nunneries have magnificently contributed in restoring and preservation of the rich culture and tradition of Buddhism. Today, the monasteries have reached such a status, where they can flourish without much assistance from the CTA," he said.

Speaking on the religious conference, he said, " The religious conference was first initiated by His Holiness the Dalai Lama in 1963 to facilitate inter-school dialogue. Often we tend to forget our refugee status in the seemingly beautiful world, and such conference is a reminder that we do not belong here. We belong to a country Tibet that is under constant threat of losing its culture and tradition," Kalon said.

Regarding the decreasing number of monks and nuns joining monasteries and nunneries in recent times, Mr Chhinjor said that his department exerts maximum efforts in solving this problem. At the same time, he added that the focus of the monasteries should be on quality rather than the quantity of the monks as per the advice of His Holiness the Dalai Lama.

"We have invited the major the religious leaders for working in accordance with the wishes of His Holiness the Dalai Lama and the preservation and promotion of Tibet's rich and unique Buddhist and cultural heritage to the Buddhists institutions," Secretary for Religion and Culture Department of the CTA, Dhondup Dorjee Gyalling said while speaking with media.

The spiritual leader of Tibet His Holiness the Dalai Lama will address the religious leaders at the conclusion of the conference on 20 June.

The conference was organised by the Department of Religion and Culture, CTA. Overlooking religious and cultural affairs in Tibetan exile community, the department says it supervises 262 monasteries and nunneries in India, Nepal, and Bhutan and looks after the welfare of approximately 39,479 monks or clergies living in these institutions.