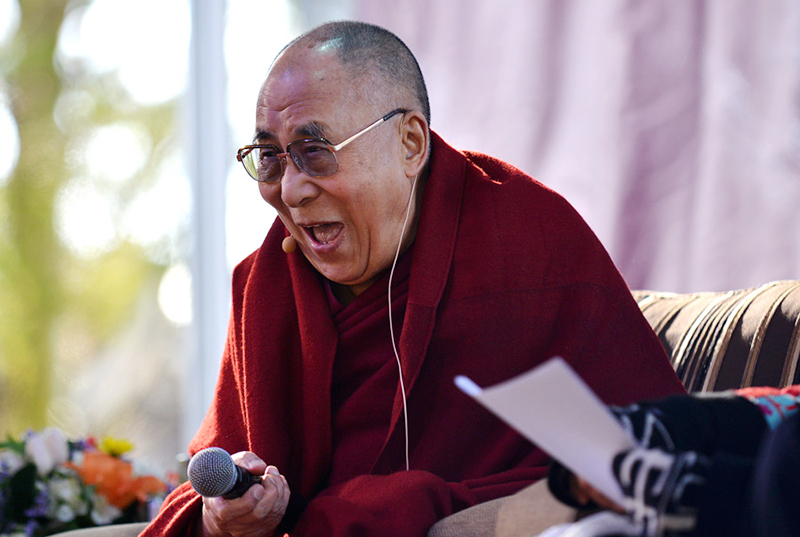 Leura, Blue Mountains, NSW  —  Speaking on the real source of happiness and warm-heartedness, the spiritual leader of Tibet His Holiness the Dalai Lama said “where they are less well-off but full of love and generosity, a family will be full of joy."

“I’m one of 7 billion human beings. We are all the same, physically, mentally and emotionally. We all want to live a happy life and from the moment we are born that’s our right," said His Holiness the Dalai Lama while speaking to an audience of more than 3600 at the Katoomba Public School, on 8 June 2015 where he was welcomed by Mark Greenhill, the Mayor of the Blue Mountains.

His Holiness said "We also all have the potential to show affection to others because of the affection we have received in childhood.”

The Nobel Peace Prize laureate said that scientific experiments have indicated that basic human nature is compassionate. When infants are shown simple images of people helping or hindering each other, it’s the help that they prefer. There is also evidence that a constant experience of fear, anger and hatred eats into our immune systems. He suggested that a more compassionate attitude brings inner strength, self-confidence and a calm mind. A healthy mind improves our physical well-being.

“We all have the seed of love and compassion within us. This is a source of hope for humanity and we need to pay more attention to it. Unfortunately, humane values that are strong in us when we are young tend to fade as we grow up and become more independent. Our existing education system is oriented towards materialism and has little time for inner values.

Ordinarily people have looked to religion for humane values, but 1 billion out of the 7 billion human beings alive today have no faith and don’t consider the practice of compassion to have much worth. Meanwhile, among religious people there are many who are insincere, so even religion, which should bring tolerance, harmony and inner peace, can become a source of conflict."

“The appropriate way to develop inner values may now be to develop secular ethics. Some of my friends are wary of the term secular, but according to the Indian interpretation it doesn’t mean something distant from religion, but having a respect for all religious traditions and even for the views of those who have no faith.

“Where inner values are lacking, no matter how rich or powerful they are, a family will not be happy. Where they are less well-off but full of love and generosity, a family will be full of joy. The real source of happiness is warm-heartedness.”

His Holiness mentioned that one of the greatest gifts human beings possess is the ability to smile. Another is the human brain. He said we need to use our intelligence to judge what is really in our short and long term interest.

“Ask yourself, ‘What is the value of anger?’ There is none. Anger destroys our inner peace, destroys friendship and destroys happy families. Loving kindness on the other hand brings immense benefits, ensuring we have physical health and a happy mind. Concern for others produces trust which is the true source of friendship. And friendship is important because we are social animals. We depend on others for our survival.

“A lot of problems humanity faces today are our own creation. No one is looking for trouble and yet we create problems for ourselves. We become slaves to our destructive emotions, so responsibility for finding a solution rests on our own shoulders.

“Ours is a globalized world. Climate change affects us all; no one can hide from it. The global economy means we need to think of other people as members of our one global family. This is why we need to incorporate humane values based on common sense and common experience into our education systems.”

His Holiness commented on scientific evidence of the positive results of simple training in cultivating a sense of love and care for others. Participants in an investigation were tested for blood pressure, stress and other factors before engaging in a training that gave them half an hour’s training in love and compassion aevery day for three weeks.

At the end their blood pressure and stress levels were lower and their relationships with their companions improved. Consequently, it seems that if we want to see a better world, we each have a responsibility to contribute to making our families, communities, and nations more compassionate.

His Holiness said that he doesn’t expect to see such change in his lifetime. But those who are young today, who belong to the 21st century, have an opportunity to make a difference. They will need a vision and they need to start now.

Concluding his talk, His Holiness asked the crowd:

“If you think of me as your friend, please think about what I’ve been talking about and ask yourself how you can contribute to making the world a better place.”

In answering questions from the audience His Holiness referred to the cultural aspects of religious traditions, as opposed to their religious and philosophical aspects, that may be out of date and in need of change. He cited the example of the Buddha’s granting men and women equal opportunity to engage in spiritual development and yet monks were accorded seniority. He said he’d like to see this change, but it will require the consensus of the international Buddhist community.

In the context of forgiveness he told the story of an elderly monk from Namgyal Monastery who spent 18 years in prison in Tibet after 1959. Following his release in the 1980s he came to India and His Holiness had the opportunity to talk with him. When the monk remarked that he’d several times felt in great danger, His Holiness thought he meant his life was in danger. The monk clarified that he meant he’d been in danger of losing his compassion for those who imprisoned him.

“This,” His Holiness said, “is the real practice. This was a case of real forgiveness.”
He pointed out the importance of distinguishing the action from the agent. The action may be wrong, but the agent remains another human being.

A couple of questions touched on relations between parents and children and His Holiness declared he had no answer because he had no children and no experience. However, he recalled that his own father had been warm-hearted but quite short-tempered, while his mother was so kind that her children never saw her angry. He wondered if he were to have had children, which of his parents he would have taken after.

Asked if he had any regrets, he replied that as a child he’d been lazy and reluctant to study. He said he now regrets that when he could study he didn’t and the time will never return. He also recalled fighting with his older brother, leaving the scars of scratches on his face, and he regrets that he is no longer alive.

When a mother asked how to deal with a husband who is regularly angry in front of their children, he quoted a Tibetan saying that you may fail nine times, but nine times you should try again. He advised her to try to cool the situation down, but if it couldn’t be done, perhaps she should consider leaving him.

As for how to teach children forgiveness, His Holiness spoke of the need for a map of the emotions. He suggested that to really learn how to deal with emotions we need a much more thorough understanding of how they work. He mentioned that ancient Indian and Buddhist psychology have a lot to teach about this and he has recommended in India the advantages of seeing how ancient and modern knowledge could work together.

Regarding the challenge presented by ISIS he reported that Indian Muslim friends have told him that a genuine practitioner of Islam does not shed blood. Moreover, the word ‘jihad’ refers not to fighting with others but to combating destructive emotions within yourself. In relation to ISIS he declared we cannot remain indifferent, we have to do something, but we have to remember that its members are human beings too.

He spoke of an occasion when he had been invited to meet victims of both sides of the conflict in Northern Ireland. When he entered the room the atmosphere was tense and the expressions on their faces were grim. He talked to them and gradually they relaxed, their expressions softened and eventually the atmosphere in the room felt better. He remarked that many cases of religious conflict arising now are symptoms of past mistakes.

Finally he was asked, “If you are born in an undesirable place can you still make progress?” In reply he told the story of the 1st Dalai Lama who was both a great scholar and a great practitioner. When he reached his 80s he expressed some sadness at growing old. His disciples responded that he shouldn’t worry because he would probably be born in a heaven or pure land. He retorted that he had no wish to go to a pure land. He wanted to be born where there were people suffering so he could help them.