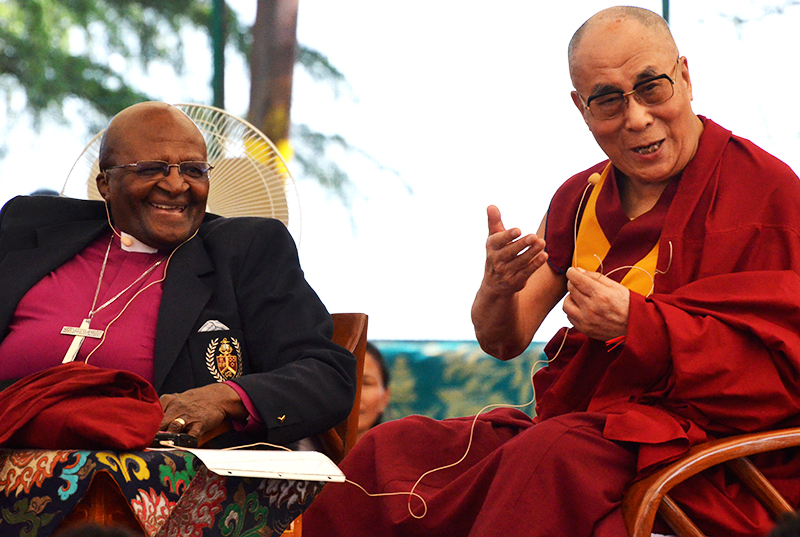 Dharamshala — On Thursday, April 23, 2015, good friends His Holiness the 14th Dalai Lama and Archbishop Desmond Tutu together graced a gathering at the Upper Tibetan Children's Village School. The streets were lined with faces, happy to catch a glimpse of the two spiritual leaders.

On arrival at TCV His Holiness and the Archbishop were escorted into the small library adjacent to the basketball court. Amidst the neat bookshelves and displays of projects the children had done writing about 'joy', several students, girls and boys, recounted their own journeys from Tibet to the school. The first, who had come with her grandmother, leaving the rest of her family behind, broke down in sobs and tears. Archbishop Tutu's daughter, Mpho, stepped forward to hug and comfort her. She completed her tale, but when the next student too was overcome with emotion His Holiness intervened, suggesting:

"You should think about how as a result of coming here you have been able to receive not only a modern education, but also to learn about our rich culture. You've been able to study our language. This is the best language for explaining the profound traditions of Nalanda University. This is something to be proud of. And yours may be the generation that can rebuild Tibet."

When His Holiness was invited to address those gathered on the basketball court of TCV school, he turned to the Archbishop and joked that since the Archbishop teases him so much about his English, on this occasion he would speak in Tibetan. He stated that although our various religious traditions have different philosophical viewpoints, they share a common message of love and compassion. This is clearly reflected in the Archbishop and is why he admires him.

Addressing the throngs of students seated in front of him, His Holiness said:

"We received immense help from the Indian government. The world helped us. Because of the kindness we have received you have the opportunity to study today. Please, work hard. We Tibetans are going through a very difficult time, but we still have our own language and culture. Please take full advantage of your educational opportunities."

Archbishop Tutu spoke next, acknowledging His Holiness, the students, and others who were in the crowd.

"It's a great honor and privilege to be here... We in South Africa lived for many years under a system of injustice and oppression. Many of our leaders and young people went into exile. It seemed as if the chains of oppression would never be broken, that our prisoners on Robben Island would never come home. And yet," and he let out his characteristic high pitched chuckle, "it happened."

"In 1995, our beloved Nelson Mandela and the others were released and the exiles came home. One day, you too, all of you, will see your beloved Tibet again. You'll be free of the oppression that has driven you here. The Chinese government will discover that freedom is actually cheaper than oppression."

He spoke of the deep honor he feels to count His Holiness as his friend and to the laughs of the crowd, claimed "I pretend that I am modest and I don't tell too many people that actually he is a very very dear friend. I just say, 'well you know, he is mischievous. He is troublesome. When I am wearing my cap, he takes off my cap and puts it on his own head.' But you know, the world supports you. The world loves His Holiness."

The two great spiritual leaders then took questions from the students regarding various topics regarding violence, materialism, environmentalism and finding joy.

A band on the stage led the whole crowd in singing, 'We are the world'. Archbishop Tutu got to his feet, dancing and swaying to the music. At the end he took the microphone and led everyone in singing 'Happy Birthday' to His Holiness as a large cake ablaze with candles was placed before them. He called for children to come and help His Holiness blow the candles out. The cake was cut and it was distributed among the children and guests.

Tomorrow will see the final day of the conversations that are to become the 'Book of Joy'.