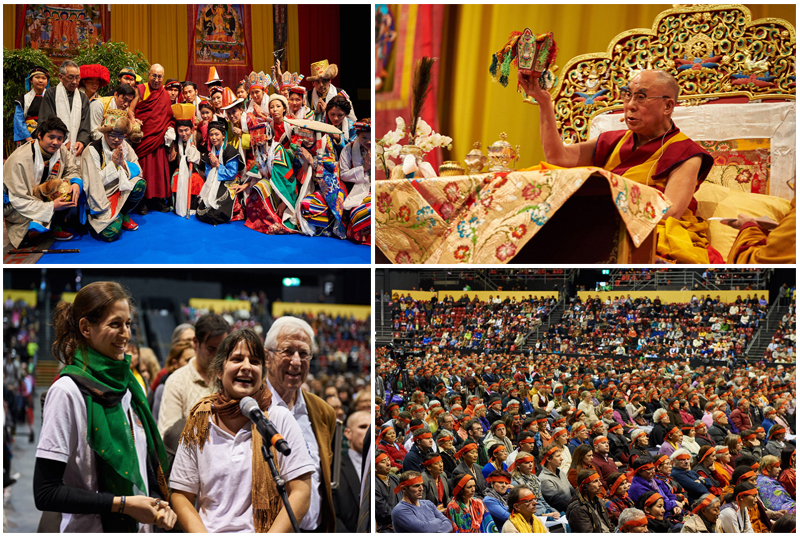 Basel, Switzerland: - The spiritual leader of Tibet His Holiness said that 'it is quite possible to make the 21st century an era of dialogue in a happier more peaceful world, if young people today take the necessary steps.'

On the last day of the teachings, on Sunday February 8, 2015, His Holiness conferred the Avalokiteshvara Empowerment at St Jakobshalle in Basel. After lunch, His Holiness was visibly pleased by a performance of an extract from Tibetan opera by a group of young singers and musicians.

City-Canton President Guy Morin in his introduction noted that the first Tibetans had settled in Basel 55 years ago, very soon after coming into exile. He tickled the audience when he reported that on the basis of their Google searches, the people of Basel are apparently the least happy in Switzerland. He asked His Holiness - "How do we become happier?"

In response to this, "His Holiness said "I am extremely happy to have come here to meet you all. When I look at the faces of the people of Basel who have come here, they all look quite happy. I think your question requires more investigation."

"All 7 billion human beings alive today face problems. No one is without problems, but when faced with them our mental attitude makes a big difference to how we respond. Of course, physical facilities and comfort are important and have their place."

"But I have met people who have all the facilities and comfort they could want who are still unhappy. On the other hand I often remember a Catholic monk I met in Montserrat, Spain, who had spent 5 years in the mountains living as a hermit on only bread and water. I asked him what he'd been practicing and he told me he'd been meditating on love. And as he said this his eyes sparkled with joy," he said.

His Holiness added that "on the basis of his testimony our mental experience is superior to our physical experience. What we need is inner peace, the kind of peace that remains undisturbed in the midst of trouble."

His Holiness noted that scientists have found that peace of mind and the qualities that give rise to it like patience, tolerance and forgiveness are good for our physical health as well as our sense of mental well-being.

He said the question is how we can promote the inner values that give rise to peace of mind and suggested reliance less on religious tradition than on reason, common sense and scientific findings.

As a different approach to educating people about inner values, he cited the example of secularism as it is observed in India, a country with a secular constitution. The Indian approach of holding the views of all religious traditions and even those of non-believers in equally high regard seems especially relevant in today's world.

His Holiness suggested that whatever words we use to describe what he calls secular ethics, it represents an approach to human values that is not confined to this or that religious belief. He said that whereas yesterday and this morning he had spoken as a Buddhist monk, he was presently speaking just as another human being. He said:

"You have problems and so do I. You find yourself having to deal with emotions like anger and jealousy; me too. And just as I pay attention to inner values to try to generate inner peace, you can do the same to be happier in yourself, in your family and community. We are all fundamentally the same as human beings."

He drew a distinction between those in the audience like him who were more than 30 years old and who belong to the 20th century and those younger than 30 who belong to the 21st century. He suggested that while we cannot change the past, we can learn from it. If young people today take the necessary steps it is quite possible to make the 21st century an era of dialogue in a happier more peaceful world.

Inviting questions from the audience, he was asked how he could be happy without freedom. He replied that when he reached India he felt truly liberated. And as to whether there would be a 15th Dalai Lama the Tibetan spiritual leader reiterated what he has said before that he made clear as early as 1969 that the question ultimately rested with the Tibetan people. However, in 2011 a meeting of Tibetan religious leaders had resolved to defer the decision until he was about 90. So he laughed and said, "Wait another 10 years."

To a question about whether animals can attain Buddhahood, he replied that consciousness is the seed of enlightenment. He said human life is precious, because, while some animals may have sharper senses, human beings have an intelligence that provides immense potential.

A young boy asked why he was troubled by people at school and His Holiness told him he didn't know since he appeared to be humble and gentle. However, he suggested that sometimes when others try to take advantage of you, you have to be a bit tougher.

This answer attracted resolute applause. To another question about preparing for the process of dying, His Holiness said the important thing, first of all, is to lead a meaningful life, serving others if possible, but at least not doing them harm.

Another member of the audience told a story of being deceived by people on Facebook, especially when she realized that they followed Shugden. His Holiness said there shouldn't be a situation like that when Time magazine ran a cover story about a monk in Burma who it labelled a 'Buddhist terrorist'.

The President of the Tibetan Community of Switzerland and Liechtenstein made a financial statement and thanked all who had contributed to making the two days they had hosted for His Holiness a success. In a talk explicitly to Tibetans following this, His Holiness praised the strong sense of unity and patriotism among Tibetans inside and outside Tibet.

He encouraged them to study, to keep up their use and knowledge of their language and culture and to ensure they didn't let down the Tibetan reputation for honesty and kindness. "You've shown me great hospitality here in Basel. Thank you. Tashi Delek, stay happy."