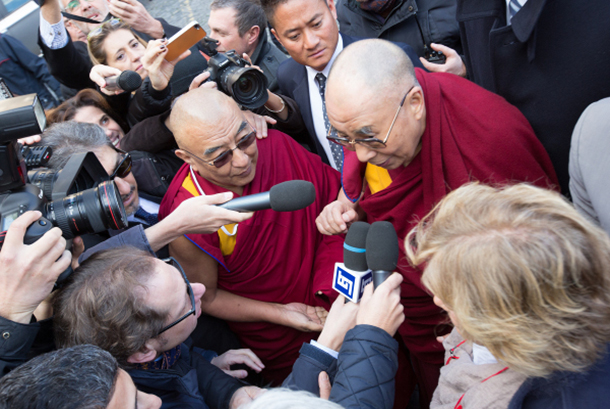 He was received at the airport by Enzo Cursio, the Vice President of the Permanent Secretariat of the World Summit of Nobel Peace Laureates and Ngodup Dorjee, Representative of His Holiness the Dalai Lama for Central and Eastern Europe.

About 150 Tibetans and Tibetan friends welcomed His Holiness at Hotel Boscolo with Tibetan traditional welcome offerings; 10 of them were media people.

He drew on the example of India's long-standing tradition of tolerance and non-violence where the world's major religious traditions have lived side by side in harmony for centuries. Rome's mayor offered to host the summit on behalf of Cape Town after it was announced in September that the event would be cancelled.

Previous delays in dealing with His Holiness the Dalai Lama's visa requests by the African National Congress-led government has angered South Africans who saw it as a betrayal of the country's commitment to human rights since apartheid ended 20 years ago.

South African Nobel peace laureate Desmond Tutu criticised his government for denying His Holiness the Dalai Lama access to the summit in Cape Town. Mr Tutu said he was "ashamed to call this lick-spittle bunch my government".

South Africa denied His Holiness the Dalai Lama permission to attend the summit to avoid angering communist China, which accuses the spiritual leader as a campaigner for independence for his country.

"The summit is the most inspirational and largest annual event in the field of peacemaking. It aggregates panel discussions among Nobel peace laureates and representatives of the leading international organizations, media, business and government in open forums," the Summit organiser said in a statement.

"It gives the opportunity for group and individual meetings with high-profile leaders from around the globe," the statement said, adding: "It has dedicated student's workshops organized in collaboration with international organizations and Nobel peace Laureates."

According to the World Summits of Nobel Peace Laureates, "the history of the annual Summits dates back to 1999, the year marking the first Summit held in Rome at the initiative of the Gorbachev Foundation, an international NGO found by the former leader of the USSR. "

"Since then, the Summits have gained importance as a venue for exchanging opinions and as an event promoting international peace campaigns and initiatives and well as developing concrete proposals to tackle the planet's emergencies for a world without violence," it added. "Each year, the Summits are attended by Nobel Peace Prize Laureates and prominent global figures, who are active in the social, scientific, political and cultural areas," it further said.