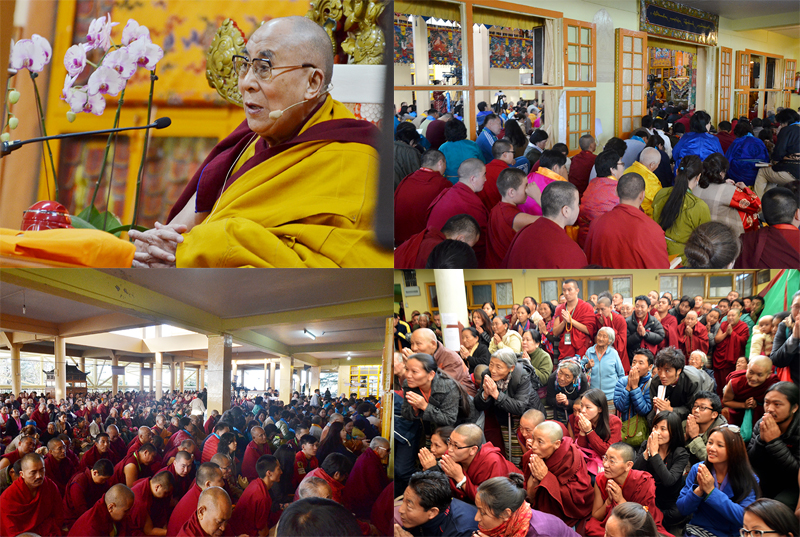 Dharamshala: - 'The achievement of good rebirth is not the specific aim of the Buddha's teaching, but liberation,' His Holiness the Dalai Lama said during the final day of his four day teaching for Mongolian devotees.

It was chilly and dark when His Holiness the Dalai Lama reached the Theckchen Chöling Tsuglagkhang this morning to begin preparations for the Chenrezig Gyalwa Gyatso – Avalokiteshvara Jinasagara – empowerment he was going to give. The temple, its surrounding verandas and the garden steadily filled with people until an estimated 5,000 had gathered. They sat quietly reciting Om mani padme hum as they waited for His Holiness to begin to teach.

Shortly after eight o'clock he took his seat on the throne.

"The teaching of the Buddha is said to include the Perfection Vehicle and the Vehicle of Secret Mantra," His Holiness began. "In the Perfection Vehicle we develop the awakening mind of Bodhisattva and engage in the practice of the perfections. We follow the five paths and the ten Bodhisattva grounds. The Secret Mantra Vehicle includes other functions, such as the cultivating of great bliss and employing the subtle mind and wind energies. Through these we attain the body of the Buddha. Nagarjuna said that perfect enlightenment implies attaining the mind and body of one taste. And there is a need to have cultivated that on the level of training. This mind and body of one taste has different names according to different traditions of practice. In Dzogchen they refer to the rainbow body and in the Kalachakra to the body of empty form."

His Holiness spoke of how many people receive empowerments with the thought of gaining wealth or longevity, or even for the purpose of overcoming their enemies. This reveals a preoccupation with the things of this life. This is not the aim of the teaching of the Buddha. Even the achievement of good rebirth is not the specific aim of the Buddha's teaching, because this can be achieved by following most religious teachings. The particular aim of the Buddha's instruction is liberation. And we will only attain liberation on the basis of an understanding of emptiness.

His Holiness explained that the empowerment he was about to give related to Avalokiteshvara in the context of Highest Yoga Tantra. The lineage derives from Vajradhara, Tilopa, Maitripa and Jangsem Lodro Rinchen. His Holiness said he received it from Trijang Rinpoche, who received it from Tadrag Rinpoche, who was given it by Purchok Jhampa Tsultim Gyatso, tutor to the 12th and 13th Dalai Lamas. The author of this rite wrote that Tibet is a land in the care of Avalokiteshvara, so a Highest Yoga Tantra practice of Avalokiteshvara would be complete.

Towards the end of the session His Holiness gave the reading transmission of a prayer he has written for the swift return of Kalka Jetsun Dhampa Rinpoche. The prayer was requested by the Jonangpas and others. He again remarked that he had known the previous Jetsun Dhampa since he was ten years old. When speaking about him the other day, he mentioned that he had encouraged him to take his next birth in Mongolia.

At the end of four days of teaching, three of which focused on the first six chapters of the 'Great Treatise on the Stages of the Path to Enlightenment', His Holiness concluded:

"We've come to the end of the teaching; now do the practice. But practice according to your own capacity. Don't start out by aiming too high; follow the stages of practice in an orderly manner. Maybe we'll meet each other again in Mongolia next year."