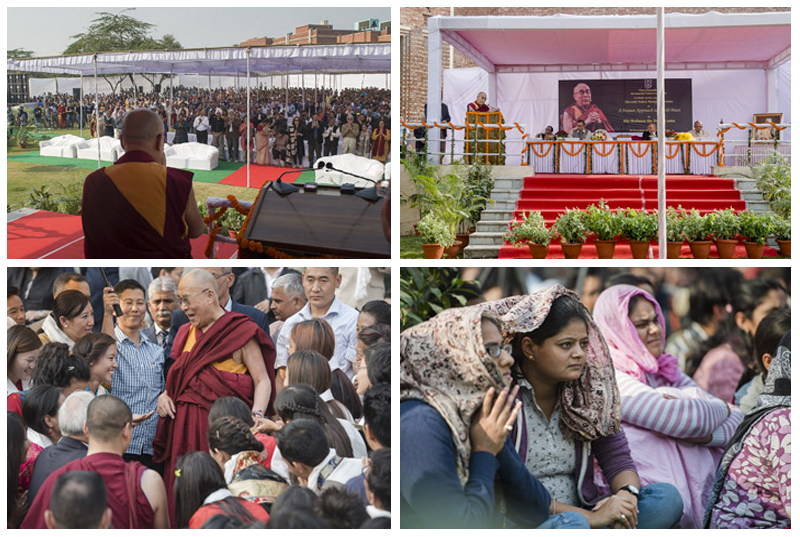 New Delhi, India: - "Nehru was a great supporter and friend to me," His Holiness the Dalai Lama said on Thursday while addressing the 11th Nehru Memorial at Jawaharlal Nehru University in New Delhi on 20 November.

Arriving at the Jawaharlal Nehru University campus, His Holiness the Dalai Lama was received by the Chancellor, Prof. K. Kasturirangan, the Vice-Chancellor, Prof. S. K. Sopory and other members of the administration.

An audience of more than 1200 gathered under a shamiana canopy and His Holiness looked out over a sea of smiling faces and was welcomed with warm applause.

The occasion was inaugurated by lighting a lamp before a portrait of Pandit Nehru. The Vice-Chancellor, Prof. S. K. Sopory pointed out that this year marks the 125th anniversary of Nehru's birth. The purpose of the lecture was to advance and disseminate knowledge in accordance with Nehru's principles of humanism, tolerance, the adventure of ideas and the search of truth.

The University that bears Jawaharlal Nehru's name, maintains an ethos of dialogue and respect for diverse views the Chancellor said, adding that the University upholds India's timeless value system of peace and non-violence.

"Respected elder brothers and sisters," His Holiness began, "and all of you other brothers and sisters, I always like to emphasise that on a basic human level we are all the same. We 7 billion human beings are the same, physically, mentally and emotionally. Of course, there are minor differences between us in terms of the size of our noses or the colour of our hair, but these are entirely secondary. We all have the same kind of brain, so demarcation on the grounds of nationality, faith or colour is unimportant."

He said humanity needs to be more mature. Most of the problems we face are of our own making and are based on secondary differences such as faith and nationality. He said the fact is that we are social animals, whose very future depends on other beings.
"This is why I like to begin by greeting everyone as my brothers and sisters."

He said the invitation to speak on this occasion came as a great honour. Jawaharlal Nehru was a great Indian leader with a far-reaching vision for Asia. Although India is an ancient nation, it won independence in 1947, led by Nehru and Mahatma Gandhi. The two of them shared differences of opinion, yet together they established India as a nation based on democracy, secularism and ahimsa. His Holiness remarked:

"I personally first met Nehru in 1954 in Beijing. It was at a state banquet hosted by Zhou Enlai, who introduced the other guests to him. When he came to me and said 'This is the Dalai Lama,' Nehru froze, speechless and unmoving. I felt that at that moment all his concern about developments in Tibet and perhaps reflections on Patel's warnings ran through his mind. Zhou Enlai broke the spell by moving on to the Panchen Rinpoche who stood next to me.

"Our next meeting was during the Buddha Jayanti celebrations in Bodhgaya in 1956. During this period, I had several meetings with Nehru and sought his advice. By early 1957 several of my advisers were of the opinion that I should remain in India and not return to Tibet. Nehru told me I should go back, highlighting the clauses in the 17 point agreement that I should pursue. I went back and tried to apply his advice. As soon as I reached Yatung, I told the Chinese officials that we should pay more attention to repairing the mistakes that had been made.

"When all else had failed and I reached the Indian border again in April 1959, I was unsure whether I would be able to enter India, until I received a message to say that the Government of India would welcome my arrival. Towards the end of April I reached Mussoorie and Nehru came to see me. I explained all that had happened and he paid special attention.

"In 1960 he advised me that we should make English, as an international language, the medium of study in our schools. He told me that the way to support our culture and traditions was to educate our children. Nehru was a great supporter and friend to me, so it is an honour for me to speak here on this occasion."

His Holiness went on to outline his three main commitments, his sense that as human beings we each have a responsibility to care for humanity. As social animals, human beings need friendship, but friendship doesn't come from wealth and power, but from showing compassion and concern for others. He said:

"Look at my face, my friends tell me it hasn't changed much in 15-20 years. It's unlined by age and people ask 'What's the secret?' I tell them 'Peace of mind.' And today, even scientists are confirming that peace of mind is good for our physical health. But it's not tranquilizers, alcohol, drugs or gambling that bring peace of mind. My number one commitment is to extend awareness that peace of mind depends on our cultivating inner values.

"We are too materialistic. India should lead the way in showing that in addition to material benefits we need inner development. We can find this by following India's secular approach of showing respect for all religions and even those people with no faith. Those one billion cannot be excluded; they too need to know that the basis of happiness is within. What we need is not more preaching, but education. If we succeed in that, we may be able to make this a century of peace and non-violence. But all of us, particularly you who belong to the younger generation, have a responsibility to bring this about."

His Holiness explained that India is a living example of a country where all the major religions flourish side by side. Indigenous traditions like Hinduism, Buddhism, Jainism and the Samkhya School live together with Zoroastrianism, Judaism, Christianity and Islam that have come from abroad. He said he regularly encourages people in other parts of the world to emulate the harmony that exists here.

As a Tibetan, His Holiness's third commitment is to the Tibetan people who place their trust in him. Since 2011, and his retirement from political involvement, he dedicates himself to preserving Tibetan culture, a culture of peace and non-violence, and protection of the environment. China, as the country with the largest population, needs such cultural values.

"These are my commitments and I urge you too to think about the larger concerns of the whole of humanity. Don't limit your view to what India or your particular state within it needs. Teachers in ancient times like the Buddha thought in terms of the whole world. China may have the largest population, but you have democracy, freedom, and the rule of law - use them to promote education."

Asked if the Buddha's way of teaching is appropriate today His Holiness replied that it is, quoting the Buddha as instructing his followers not to take what he said at face value on the basis of devotion, but to investigate and experiment with it, to adopt a scientific approach.

Asked about his stand on Tibet and the prospects for relations with China, he paused to note that these were political questions. He went on to note that China is changing and that Xi Jinping stated in France and again in Delhi that Buddhism has an important role to play in Chinese culture.

With regard to global development, His Holiness counselled taking serious steps to address climate change and the gap between rich and poor. He reiterated the importance of education and mentioned the development of a pilot project to design a curriculum based on secular ethics. The fundamental point is that it is affection, warm-heartedness, that makes us happy; wealth alone can't do that.

Offering silk scarves to the participants he explained that the gift has its roots in the Indian tradition of offering a shawl, that the silk material originated in China and that the auspicious verses inscribed upon it are Tibetan - a symbol of harmony.