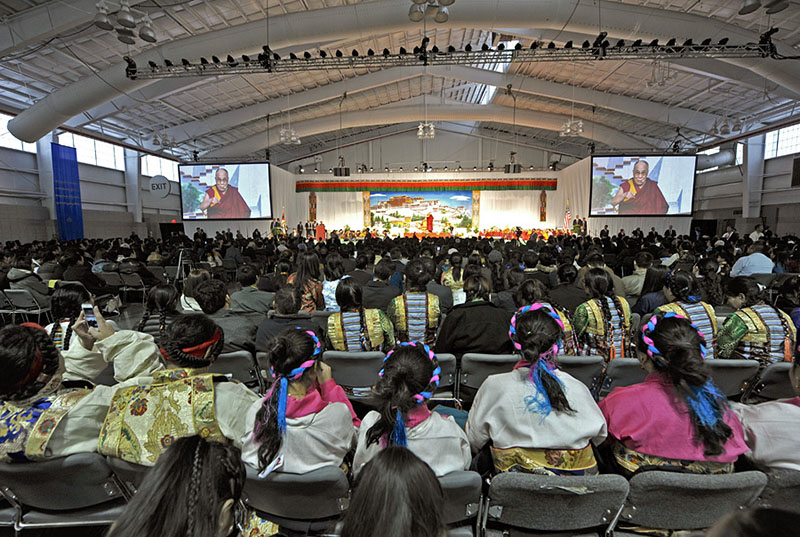 New York: - The spiritual leader of Tibet His Holiness the Dalai Lama praised all his fellow Tibetans inside Tibet for not losing their spirit, even they have been going through difficult times under the hard-line policies pursued by Chinese government.

As his busy visit to the United States comes to an end, His Holiness the Dalai Lama was greeted by an audience of 5000 Tibetans and The President of the New York & New Jersey Tibetan Association at the Javits Convention Center in New York on November 5.

Against a backdrop of the Potala Palace, everyone in attendance stood for the Tibetan National Anthem and listened to the Nobel Peace prize laureate discuss issues of education, Buddhism and national identity. These topics have been a theme throughout his visit to the United States.

His Holiness began his address with surprise at the size of the community saying, "My dear Tibetan brothers and sisters, today, when I have this opportunity to meet all of you, I wondered for a moment if I was back in Tibet, or in one of the large settlements in South India. You're all working hard to retain your Tibetan identity and spirit and I thank you. Here on this new soil, it seems you have made a lot of children! Ensure that they grow up as Tibetans."

The Tibetan Buddhist leader stressed the importance of education and told his supporters "21st century Buddhists need to study". He went on to say that a child learning to merely chant the verse for taking refuge is not enough, "Prostrating, chanting mantras and circumambulation are good, but they are not the main practice. You need to know how to transform the mind," he said.

His Holiness also made reference to the work he had learnt about in Vancouver and British Columbia to introduce secular ethics into schools.

When discussing the situation in Tibet His Holiness praised the 6 million Tibetans in Tibet for not losing their spirit or character. "They have been going through difficult times, not least because of the hard-line policies pursued by Chinese officials in Tibet," he said.

He told supporters: "The Tibetan issue appears to be a struggle between the gun, the use of force, and the truth. It may appear that in the short term the gun is more effective, and yet in the end the truth will prevail."

He concluded his talk by offering transmission of the mantras of the Buddha, Avalokiteshvara, Manjushri, Vajrapani, Tara, Hayagriva, Vajrakilaya and the Medicine Buddha.

Later in the afternoon he met with a group of Chinese students studying in New York and nearby areas. In answering questions from the audience he gave a survey of relations between China and Tibet over the last 50 years or more, of how at times hopes of a solution have been raised only to be dashed again. He mentioned how he had tried to introduce reforms and faced obstructions, but then others imposed reforms by use of force.

"One of the problems between us is ignorance. For too long, too many have thought of Tibetans as backward and barbaric. But now they have the opportunity, more Chinese are finding things to admire in Tibet," said His Holiness.

The Tibetan Spiritual Leader began his trip in Vancouver, BC, Canada on 21 October 2014 and then moved on to the United States where he has visited Birmingham, Alabama, Boston, Massachusetts and New York City.

The visit to the United States has faced objections from Shugden followers who have accused His Holiness of religious discrimination. They protested with signs and chants outside recent events in Boston and New York.

His Holiness spoke at some length about the matter and thanked his supporters. "They say, 'Stop Lying, stop lying', but you stood behind me; I thank you. The thing is it's harmful, but whether people listen to this or not is up to them. My responsibility anyway is to warn people and to make the situation clear. I have never said anyone has to listen to me," he said.