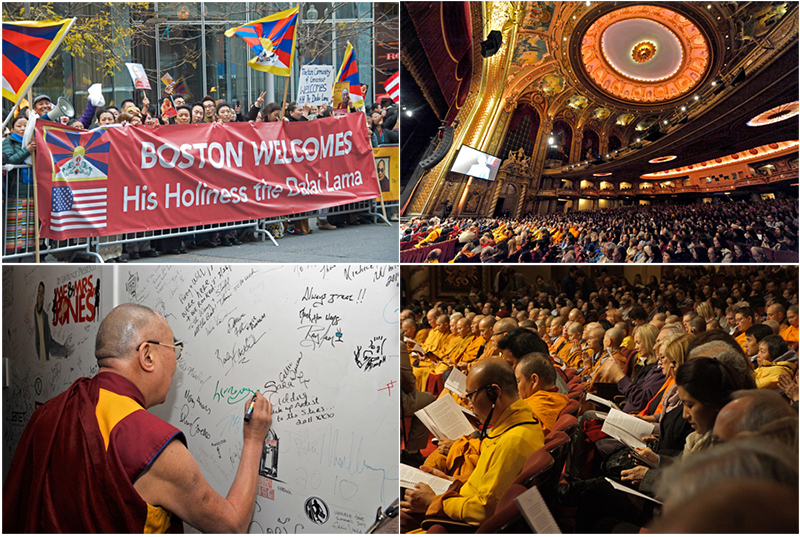 Boston, USA: – The spiritual leader of Tibet His Holiness the Dalai Lama on 31 October 2014 joined his old friends – Richard Davidson and President of the Mind & Life Institute Arthur Zajonc – as he arrived to take part in the 2nd International Symposium for Contemplative Studies (ISCS). Representatives of 23 countries were present in a body of interested people twice the size of the first meeting of ISCS.

The Tibetan leader addressed the scientific atmosphere at the event by stating, "I am a Buddhist monk. The Nalanda tradition I belong to follows the Buddha's instruction not to accept his teaching out of faith and devotion, but as a result of investigation and experiment."

He mentioned that the study of science has now been formally introduced into the curriculums of the Tibetan monastic universities re-established in South India. This is a part of a trend that began with his meetings with scientists, encounters that have been mutually enriching, according to His Holiness.

Science has intrigued the spiritual leader ever since he was a child, and he would even dismantle his toys to see what made them work. Similarly, trying to keep a generator that powered an old movie projector working taught him a great deal about the principles of electricity. In 1954-55 he visited Chinese factories, hydro-electric plants and steel works.

When Dr Davidson suggested the boundaries between Buddhism and science are increasingly blurry, His Holiness described the content of the 300 volumes of Indian Buddhist literature translated into Tibetan. They include three categories: Buddhist science, philosophy and religion. Furthermore, he expressed interest in efforts to deal with philosophy and science over the last 20-30 years, which he feels have attempted to bridge the gap between appearance and reality. Modern science knows a great deal about matter, including the impermanence and the momentary change that constantly occurs at an atomic level. Ancient Indian psychology, including Buddhist psychology, has an extensive understanding of the workings of the mind and emotions.

Dr Amishi Jha reported the previous evening there had been extensive discussion of climate change and asked His Holiness to comment. He felt he did not know what to say, but noted the role of trees in the Buddha's life. He was born under a tree, he attained enlightenment under a tree and he passed away beneath a tree. Monastic groups would move from one retreat to another and among the incoming group's responsibilities was caring for and watering the saplings planted by their predecessors. There were also strictures about not polluting the water supply. All of these considerations have an environmental aspect.

"This is our only home; if we destroy it what are we going to do? Where can we go?"

His Holiness the Dalai Lama closed the day by recounting a story from several years ago:

He had asked the British Queen Mother whether the world was getting better or not, when she was 96 in 1996 and had seen most of the 20th century. She did not hesitate in telling him the world was getting better, saying when she was young there was no talk of human rights or self-determination as there is today. Since the 20th century was an era of such violence, His Holiness is very keen that steps are taken to make the 21st century an era of dialogue instead.

He concluded, "You, members of the younger generation, are the only hope for the future. Please think seriously about what we've talked about. Look at things from a wider perspective, taking a long view. We cannot change the past, but you can shape the future."