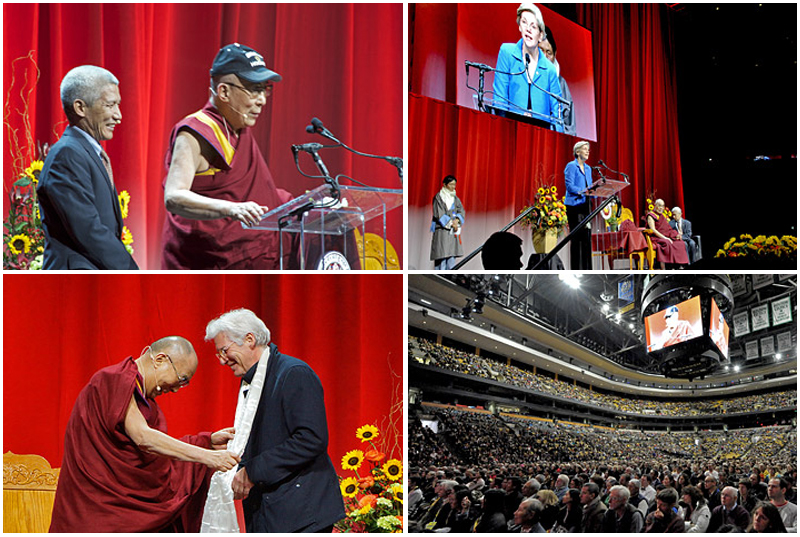 The Tibetan Association of Boston organized the final day of His Holiness the Dalai Lama's programs in the city with a public talk at the TD Garden on 1 November 2104 in Boston, MA, USA. He was given a traditional Tibetan welcome and was ushered into a meeting with US Senator Elizabeth Warren, Boston Mayor Martin J Walsh and Medford Mayor Michael J McGlynn.

Young Tibetans performed a song in praise of His Holiness, wishing that he live long. Senator Warren introduced him, praising His Holiness as an inspiration to people of all faiths around the world and quoted him as saying:

"When we have inner peace, we can be at peace with those around us. Love and compassion are essential to our survival, not luxuries." His Holiness responded:

"Respected Senator, respected elder brothers and sisters and also brothers and sisters in the general public. Firstly, let me thank the young performers who have just danced and sung. They reminded me that when I too was young in Lhasa, although monks are not permitted to do so, I used to sing and dance like that myself. There would be opera performances for six days at the Norbulingka, which I would enjoy with my mother and avoid my classes.

"Boston is somewhere I have become familiar with and the last couple of days here have been meaningful. I've learned several useful things about the mind and emotions, as well as the environment."

He said that wherever he goes he makes it clear that there is no difference between the speaker and the audience. Like all 7 billion human beings, they are the same. All want to lead a happy life, and all have a right to do so. In this, all human beings are one. And since we are all the same on a human level, there are no grounds for fighting and killing. He said that differences of faith, race, nationality and color do exist, but are secondary. To over-emphasize them leads to problems between us. They lead us to think in terms of 'us' and 'them', which easily leads to conflict.

"We all have a right to live a happy life, but what does it mean? Is it about money and power? No, money by itself does not bring happiness. I have wealthy friends who are unhappy. The real source of peace and happiness is in the heart and mind and we have to develop it within the mind."

When His Holiness put on the Bruins Hockey cap he'd been given to shade his eyes, the hall once again erupted with cheers.

"The right way to deal with mental unhappiness must be within the mind too. On an emotional level, anger, fear and worry bring unhappiness. Scientists say they eat into our immune system. On the other hand, we are also equipped with a sense of affection and compassionate concern for the well-being of others.

"When we give in to anger and quarrel, the following day we feel uncomfortable. But on other days, when we have enjoyed ourselves in the company of others, the next day we feel light at heart."

His Holiness explained that as human beings we are biologically equipped to feel and show affection. When we are in our mother's womb, we benefit from her care and affection. In the weeks after we are born, her touch is crucial to the proper enlargement of our brains. This is how our lives begin.

"The value of compassion and forgiveness is not confined to matters of religion. These are human values that we shouldn't neglect. We can cultivate them in a secular way. In the Indian sense, secularism means to respect all religious traditions as well as those who have none. After independence, India, a multi-religious society with a secular constitution, has become, compared to its neighbours, stable and harmonious. It is also the world's most populated democratic state.

"We need a secular approach. We can change society, change humanity by changing ourselves as individuals. By cultivating inner values, we can change our own lives and those of our families. This is how we can create a more peaceful world.

"I don't think of myself as anything special. I don't dwell on my being His Holiness the Dalai Lama, which would distance and isolate me from others. I think of myself as the same as others, which makes it easier for me to communicate with them. If you think about what I have said and you find it useful try to put it into effect. But if you find you have no interest, then just forget it. Thank you."

"Visit Tibet," he advised. "Go there and see how it is and report back what you find to your friends. In the 7th, 8th and 9th centuries there were Tibetan, Chinese and Mongolian emperors, but after the 9th century Tibet disintegrated. The federation we find in Europe and the United States is something I admire. The Chinese constitution allows for Tibetan areas to exercise certain rights. Our Middle Way Approach seeks to do just that."

He then addressed Tibetans in their own language. When he was done, Pema Tsewang called on Richard Gere to come up on the stage to say a few words of thanks. Greeting everyone with a warm smile, Gere said:

"I am so happy to be here, so fortunate to spend a couple of hours with His Holiness the Dalai Lama. He's a personal friend to us all. I was remembering that after watching the great Scorsese movie about his life, 'Kundun', he said that when he left Tibet, he crossed the border and the Khampas who had escorted him mounted their horses again and rode back into Tibet. He reflected that he would never see them again and he hasn't. Looking into India he said there were only people he didn't know. Now, he says, "Wherever I go I have friends," and we are all the better for that. Thank you."