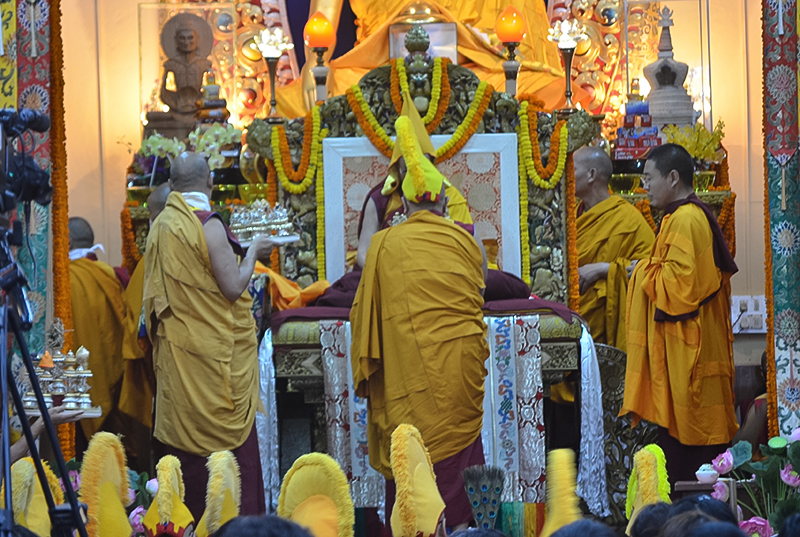 Dharamshala: - A Long-life prayer ceremony was offered to the spiritual leader of Tibet His Holiness the Dalai Lama, began early Wednesday in the morning prior to the third day of his explanation of Nagarjuna's 'Fundamental Wisdom of the Middle Way'.

The ceremony, which was based on a vision of Jamyang Khyentse Wangpo focussing on a triad of longevity deities, White Tara crowned by Amitayus, who in turn is crowned by Ushnisha Vijaya, was conducted by monks of Namgyal Monastery led by their Abbot, Thamtog Rinpoche.

Enhancing the significance of the occasion, the Long-life Ceremony was offered to His Holiness by Kewtsang Rinpoche. Yesterday, His Holiness declared a special affection for Rinpoche because it was his predecessor who discovered him in 1937. In his authentic eyewitness account, Khemey Sonam Wangdu tells how the Regent Reting Rinpoche dispatched several search parties led by eminent Lamas to different parts of Tibet.

The party led by Serje Hardong Kewtsang Rinpoche travelled to Amdo in the north-east. In the course of their journey, the party visited the Panchen Rinpoche who was then in Kyegudo. He alerted them to the urgency of discovering the 13th Dalai Lama's reincarnation and told them of three possible candidates he was aware of, one of whom was eventually recognised as His Holiness.

Travelling on, Kewtsang Rinpoche's party visited Kumbum, where Je Tsongkhapa was born. They paid their respects at the Kumbum Jampaling Monastery that was named by the 3rd Dalai Lama and subsequently visited and blessed by the 5th, 7th and 13th Dalai Lamas.

Of the three boys the Panchen Rinpoche had mentioned, one had died before the party could examine him, another was very shy in their presence but was later recognised as the reincarnation of Trichen Kekya Tulku of Kumbum Monastery. That left the boy born in Chija Taktser, a small village in the vicinity of Kumbum. Khemey Sonam Wangdu explicitly notes the great joy on the face of the small boy on meeting the members of the party, who he spontaneously recognised, referring to Kewtsang Rinpoche as 'an Aka from Sera'.

It was Kewtsang Rinpoche who conducted the traditional tests to see if the young boy recognised certain possessions of the 13th Dalai Lama. The young boy's responses and his demeanour convinced him and the other members of the party that they had discovered the young Dalai Lama. After many complex negotiations to enable the party to escort him to Lhasa, it was also Kewtsang Rinpoche who personally accompanied and took care of him on the way to his joyful reception and formal recognition in Lhasa.

Following the Long-life Ceremony that His Holiness received with pleasure, he continued his explanation of Nagarjuna's key text. At the end he told his audience that tomorrow he would lead a ceremony to generate the awakening mind of bodhichitta.