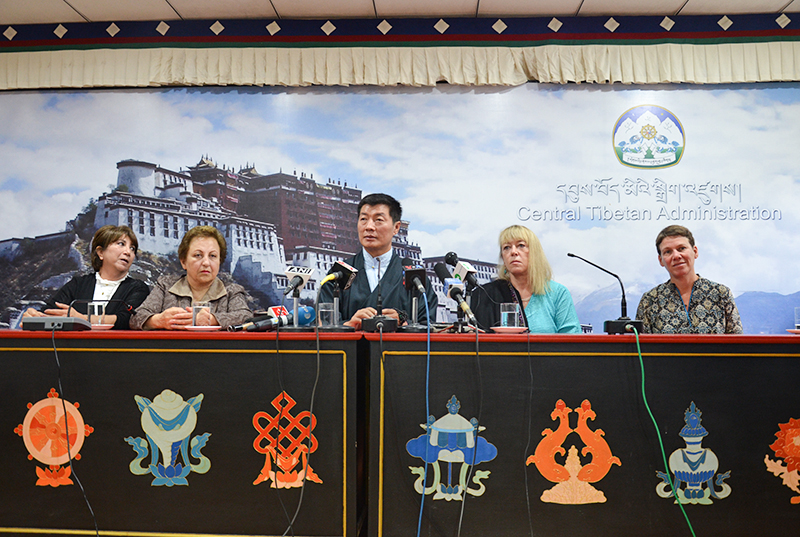 Dharamshala: - Two prominent Nobel laureates Wednesday expressed their strong support to His Holiness the Dalai Lama at a press conference in Dharamshala and criticised South Africa's refusal to give fellow Nobel peace laureate, a visa to attend a peace conference.

Speaking at a press conference with several reporters organized by the Department of Information and International Relations of the Central Tibetan Administration, Jody Williams of the US and Shirin Ebadi of Iran said they were unhappy with South Africa's decision, particularly given its history of fighting against apartheid and expressed their deep concern over the denial of visa to His Holiness the Dalai Lama by South Africa to attend the Nobel summit in Cape Town.

"We immediately sent a note expressing our deep concern that South Africa has been chosen as the venue of the Nobel summit given its history of bending to Chinese pressure and refusing to allow His Holiness to visit. A level of confusion was made for many us when he was even not allowed a visa to join the celebration of Archbishop Desmond Tutu's 80th birthday. How that could possibly be a threat to the government of China was extremely confusing for us?," said Jody Williams, an American anti-landmine campaigner.

"We are here to show to the Chinese government that the Tibetan people and His Holiness the Dalai Lama are not alone in their fight for justice, righteousness and human rights. And that's why the world supports you. There is a history of fighting against racial discrimination in South Africa and that's why we don't accept this country refusing the visa to His Holiness the Dalai Lama," said Shirin Ebabi, Iranian lawyer and human rights activist.

"Nobel Women's Initiative sent two letters to the organizers and we did media interviews expressing our dismay and decision to boycott the summit in Cape Town. In our letter, we underlined that His Holiness the Dalai Lama advocates the Middle Way Approach and not the Chinese government's propaganda that His Holiness is seeking Tibet's separation from China," said Jody Williams.

"As the mission of the Nobel Women's Initiative is to stand with people, we believe that we are not in good conscience to go to South Africa when the human rights of His Holiness the Dalai Lama and the Tibetan people are being violated," she added.

"I hope that the people of the Tibet both in Tibet and in exile understand that they really do have our support", said Jody Williams.

South African Nobel peace laureate Desmond Tutu has criticised his government for "kowtowing" to China by barring His Holiness from attending a global summit of fellow prize winners in Cape Town.

Mr Tutu said in a statement. Mr Tutu said the move sullies the memory of Mr Mandela, who would not bend to the will of powerful states in his time as president. He said he was "ashamed to call this lickspittle bunch my government".

"When the Americans told Mandela he couldn't continue his friendship with presidents Gaddafi and Castro, he told them to go and jump in the lake," Mr Tutu said, adding: Mr Mandela's heirs in the ruling African National Congress party under president Jacob Zuma had now "spat in [Mandela's] face".

Sikyong Dr Lobsang Sangay thanked the two Nobel laureates and Nobel Women's Initiative for visiting Dharamsala to show their solidarity with the Tibetan people's non violent struggle and especially to pay respect to His Holiness as This year is marks the 25th anniversary of the conferment of Nobel peace prize on His Holiness.

His Holiness the Dalai Lama was awarded the Nobel Peace prize for leading a non-violent struggle to restore freedom in Tibet.