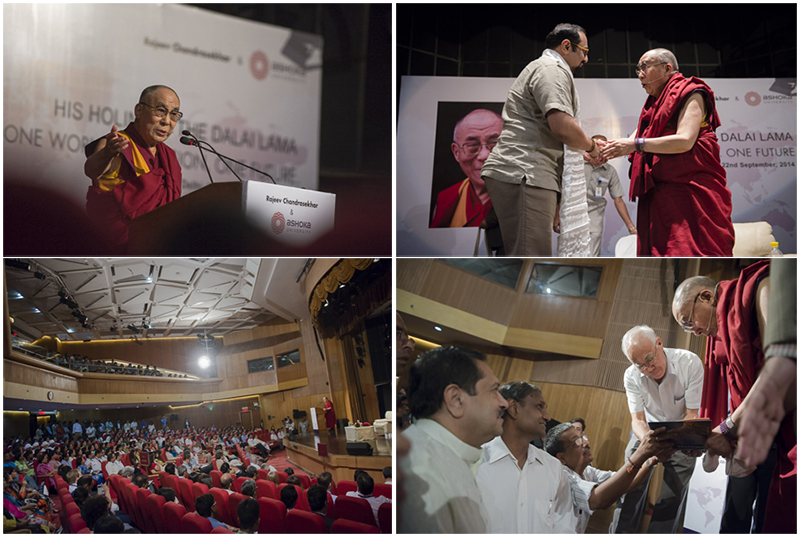 New Delhi, India, 22 September 2014: - Describing himself just one human being among 7 billion others, the spiritual leader of Tibet His Holiness the Dalai Lama said friendship must be based on 'trust, honesty and openness', while also decreasing ways of thinking in terms of 'us' and 'them.'

Monday morning, His Holiness the Dalai Lama was invited to speak at the Indian Habitat Centre by Rajeev Chandrasekhar MP and the Ashoka University. Mr Chandrasekhar is an independent member of the Rajya Sabha, the upper house of the Indian Parliament, representing Karnataka and Bangalore.

The Ashoka University is a fully residential university whose founders believe that education should be holistic and liberal. In his introduction Mr Chandrasekhar praised His Holiness as someone who espouses peace and co-existence.

"Dear brothers and sisters," His Holiness began, "that is what we all are, 7 billion human beings, brothers and sisters, each born from a mother and surviving in dependence on each other. In the past people were self-sufficient and able to live in isolated communities, but today we are much more interdependent. Climate change and the functioning of the global economy present challenges that affect us all, which we have to face together.

"Thinking in terms of 'us' and 'them' is therefore very unhelpful. I consider myself to be just one human being among 7 billion others. If I think of myself as different from others or as something special it creates a barrier between us. We all want to lead happy lives, to gather friends around us and friendship is based on trust, honesty and openness. This is another aspect of the oneness of human beings. If we defeat others, we too are harmed; if others are successful, we too benefit."

He spoke of how religious traditions outline different approaches to the same goal. Theistic traditions believe in god the creator, while non-theistic traditions, like some of the Samkhyas, Jains and Buddhists believe in self-creation. Although Samkhyas and Jains believe in a self independent of the body and mind, Buddhists say there is no such self. He clarified that this is not to say that self does not exist at all, but that it exists in dependence on other factors.

His Holiness mentioned that while some say the best way to serve god is to serve others, it is also evident that to help others rather than harming them, treating them with love and compassion leads to lasting trust and friendship. Friends attracted to the rich and powerful, however, tend to be only short term friends of wealth and power.

In answering questions from the audience, His Holiness explained that Tibetan Buddhism preserves the traditions of Nalanda University, that the Tibetan language is the most accurate means of expressing that profound knowledge. He mentioned that in terms of the past, the writings of Nalanda masters such as Nagarjuna are what have impressed him most. Closer to the present he takes great inspiration from the example of Mahatma Gandhi, who, despite his sophisticated education, chose to live as simply as he could. Noting that something is lacking in a modern education system oriented towards materialism, His Holiness expressed the belief that this can be countered by introducing a greater sense of inner values, human values that he refers to as secular ethics.

Confirming that warm-heartedness is good for our mental and physical health, His Holiness cited an experiment in which people were physically assessed before undergoing meditation and compassion training. After meditating on compassion for 30 minutes a day over three weeks they were found to have less stress, lower blood pressure and improved interpersonal relations.

Finally, asked about the role of desire, he said: "Desire is a part of life, for example, right now we all have a desire for lunch. Without natural desire we would die. The problem is when we have too much desire, that's when we need contentment. But while satisfaction and contentment are appropriate on an individual level, they are not on a national level because nations need to develop. What we also need is self-confidence, because defeatism and low morale are a sure source of failure."