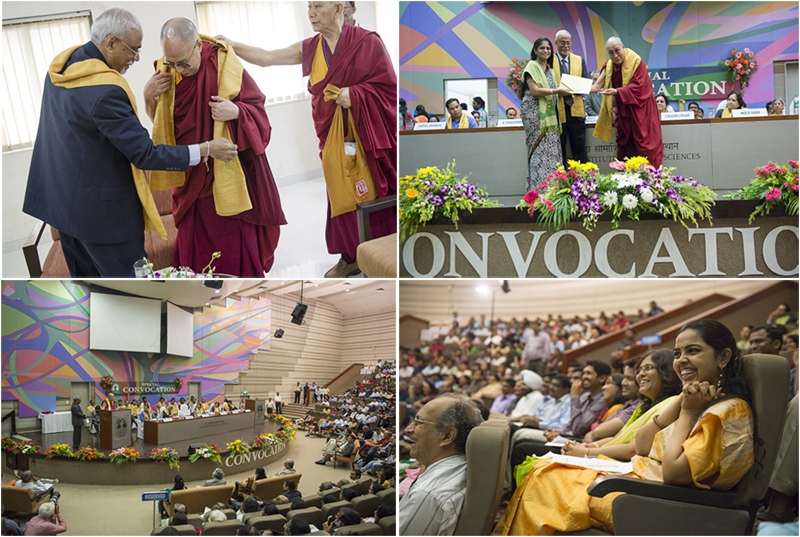 Mumbai, India, 17 September 2014: - Describing India's secularism as unbiased with respect  to all religious traditions, the spiritual leader of Tibet His Holiness the Dalai Lama said "It's a model on the basis of which India can lead the world."

The Tata Institute of Social Sciences (TISS), whose motto is "Re-imagining Futures", is one of India's most reputed post-graduate social science institutions. On Wednesday, the institute invited His Holiness the Dalai Lama to a Special Convocation at its main campus in Deonar, Mumbai as the Chief Guest. He was received at the door by Director, Prof S Parasuraman who escorted him to the auditorium.

Speaking to the gathering, His Holiness said: "Respected, learned, experienced scholars and brothers and sisters," he began, "I always stress that as human beings we are all the same. I don't care about different social rank or class, which is not important. There are differences of race, faith and culture among us, but these are secondary in comparison with the fact that mentally, emotionally and physically we 7 billion human beings are the same. We all have a human brain and like other sentient beings we share a desire for peace and happiness. Achieving a happy life and avoiding suffering is one of our basic rights."

He pointed out that because of our intelligence human beings are uniquely capable of not only creating problems, but doing so on a large scale. Therefore it is important that we use our intelligence in a constructive way. We need warm-heartedness and concern for others to do so.

His Holiness said: "I congratulate you all. I expect that when you sat your exams you felt a mixture of anxiety and excitement. I remember my own final exams when I was both apprehensive and excited, unsure what questions would be put to me in debate."

"What is important now that you have your degrees and diplomas is whether you use your knowledge to help others or not. That will depend on your motivation. The knowledge and skills you have acquired can be very useful. Justice and law, for example, are accorded an important role in India, the world's most populous democratic country," he added.

He went on to praise India for the stability it has displayed since independence in comparison with several of its neighbours. He also remarked that among the world's ancient civilizations, including Egypt and China, India seems to have produced far more great thinkers. Claiming to be a product of the Nalanda tradition himself, he noted that there is much in ancient Indian knowledge, such as its understanding of the workings of the mind and emotions, which is compatible with modern science today.

His Holiness said that as a Buddhist he engages in prayer, but that he believes in the long run that we will solve our problems not through prayer alone, but by taking action. If we are to take action, we need vision. He suggested that for development to be effective in India it must take place in the rural areas, which means that educational and health facilities in rural areas must be improved.

Recalling his own Buddhist education that began with the memorization of texts at the age of seven, he sometimes wondered what it was for until he understood it was about transforming the mind and emotions. Tackling our destructive emotions like anger and hatred entails developing positive emotions like love and compassion. This is something that also interests modern psychologists and neurologists today.

His Holiness expressed his admiration for India's longstanding secular tradition of unbiased respect for all religious traditions and the ethical values they convey. It's a model on the basis of which India can lead the world. He also voiced his belief that modern education is oriented towards material success rather than the fostering of inner values. He reiterated the need to limit destructive emotions and to nurture positive ones while developing a sense of concern for the well-being of all human beings.

"Does this make any sense?" he asked. "If it does, tell others about it. If it doesn't, then just let it go," said His Holiness. He was presented with an inscribed plate as a memento of the occasion and Prof Neela Dabir delivered a vote of thanks. She congratulated all the graduates and offered heartfelt thanks to His Holiness as the Chief Guest for his presence and for the inspiration he had brought to the occasion.