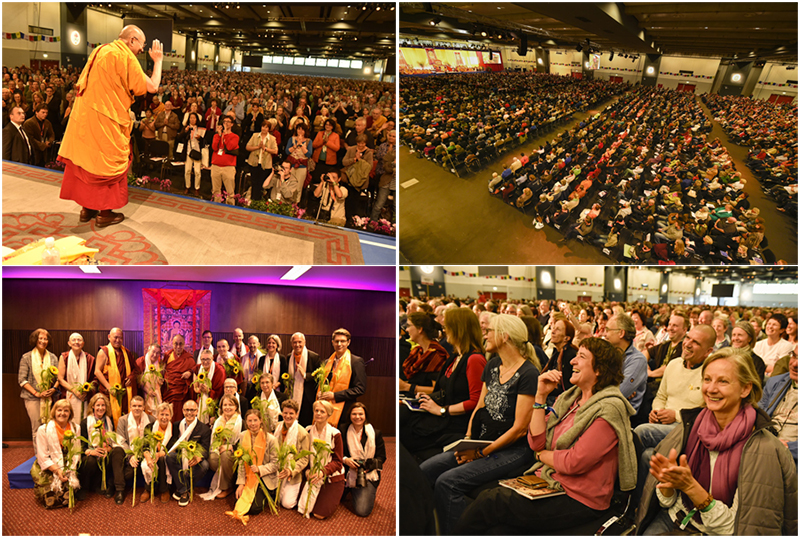 Hamburg, Germany, 23 August 2014: - Spreading his message of compassion, religious harmony, inner peace and secular ethic, the spiritual leader of Tibet His Holiness the Dalai Lama spoke to an audience of around 7,000 people in Hamburg on Saturday, at the beginning of his visit to Germany.

His Holiness the Dalai Lama was interviewed by ZDF TV's Bettina Hansen during his Visit to the northern city of Hamburg , Germany.

Answering questions, including, what makes him happy, His Holiness told ZDF TV he is happy to be one human being among 7 billion others. And when she enquired about his memories of his childhood, he told her that first of all he remembers his mother's face, recalling that despite being uneducated she was the living image of kindness.

Response to daily reports in the news of violence in the name of religion His Holiness asked; "If you believe in a creator god, and that all beings are created by that god, so all of us are brothers and sisters created by him, how can you then kill each other? It's unthinkable."

"I'm very happy to be here. I'm also pleased that at the Tibet Centre you are trying to do more than just offer Buddhist teachings. There is knowledge of the mind that can be of use to everyone in our tradition and you are making it available - thank you, " said His Holiness after he walked onto the stage at the Congress Centre.

Promoting human values, the Nobel Peace Prize laureate said all human beings are essentially the same and desire the same things from life. "Whenever I meet people, ordinary people, political leaders, business leaders or religious leaders, I always think of them as fellow human beings. We are all the same, physically, mentally and emotionally, he said when moderator Gert Scobel invited His Holiness to speak about ethics in society."

"We are beings who have feelings of pleasure and pain with a desire to be happy and right to be able to fulfill that desire. The difference between human beings and other beings is our intelligence. It gives us the ability to look to the future, which in turn brings us worry and anxiety. But only as human beings do we have the opportunity to deal with the mind," His Holiness said.

He said that on a mental level disturbances are related to our self-centered attitude. The more self-centered we are, the more we neglect others and the greater the distance we feel from them. Developing an attitude more concerned with others reduces fear and fosters friendship. Emotions that disturb our minds can only be dealt with by the mind, not by drink, drugs or surgery. Removing the part of the brain that experiences emotion would not work because human beings need feelings. But we also need a calm mind.

Another reason we need secular ethics is that we face so many man-made problems. Relying only on religious tradition can lead to a sense of 'us' and 'them', which in extreme cases can lead to the unthinkable: the killing of others.

"As I recently told representatives of the Muslim community in Ladakh," His Holiness stressed, "when religious brothers and sisters are killing each other we need to do something. We each have a responsibility to do something."

He mentioned that historically Germany has fought with France and Russia and recalled his quantum physics teacher Carl Friedrich von Weizsäcker, brother of the former German President, telling him that in his youth in every German eye the French were enemies and in every French eye Germans were too. And yet that has now completely changed with the creation of the European Union, which His Holiness regards as wonderful.

His Holiness recalled writing to his friend President Bush after the September 11th event expressing deep condolences, but suggesting that whatever response he took should be non-violent so as not to escalate the violence and create more Bin Ladens.

Gert Scobel turned the discussion to economics and secular ethics and His Holiness pointed out that while he is not an economist, he takes a Marxist view of the need for more equal distribution of wealth. He mentioned that there is no genuine socialist society anywhere today because of a lack of firm moral principles.

"When we have an altruistic motivation, all our actions become constructive. When we are self-centered our actions tend to be destructive. We need to be guided by a map of our emotions and understanding of how the system of emotions works," he added.

A question from the audience asked how zones of peace could work today and His Holiness replied that many of the problems we face are the result of past negligence. The 20th century was an era of bloodshed, he said, and we need to ensure that the 21st century is instead a century of dialogue.

"We all talk about 'peace, peace', but peace doesn't fall from the sky. We have to do something to create it. Human beings have to solve their problems themselves. And the right way to create peace is to engage in dialogue. The idea of one side suffering defeat while the other side triumphs is out of date. Instead we have to develop dialogue. We have to make an effort if we want a peaceful, more compassionate world. It requires education, based on patience, tolerance and forgiveness. Too often violence results from greed, so we also need contentment and self-discipline."

During the lunch break, His Holiness gave an interview to Matthias von Hein of Deutsche Welle TV, who asked, in the face of a China that is increasingly powerful economically and politically, what the prospects are for Tibetan autonomy. His Holiness told him that many Chinese people, particular intellectuals, support Tibetans' search for basic rights. He also noted that there are now said to be more than 300 million Chinese Buddhists, many of them interested in Tibetan Buddhism, which, like the Chinese tradition, derives from the Nalanda tradition. He said that many Chinese have told him that while China has the manpower to make a difference on the world stage, it lacks moral authority. He suggested that instead of censorship there is a need for more transparency. The Chinese people deserve to know what is going on.

At a meeting with the Press that followed His Holiness first outlined his three commitments: as a human being sharing an awareness of the value of ethics, promoting inter-religious harmony and, as a Tibetan, encouraging the preservation of Tibetan culture, which is a culture of peace and compassion.

It was put to him that while he consistently talks about peace, the world doesn't seem to pay attention; "Why don't you give up?" He replied that basic human nature is gentle and that scientists like his friend Richie Davidson have found that young infants favour action in which people help rather than harm or hinder each other, which shows this.

Another questioner observed that there were demonstrators on the street outside asserting that His Holiness has banned their practice of Dolgyal and asked what he had to say. "If you investigate the four century history of this spirit you can find out. Out of ignorance I propitiated it from 1951-70, but once I understood there were drawbacks to it I researched its origins at the time of the 5th Dalai Lama and I stopped," His Holiness said.

"A monastery turned to me for help when it faced unusual difficulties and it emerged that propitiating this spirit was at the root of it. Right from the start I have tried to be transparent about this and have tried to make things clear. Whether other people listen to what I say is up to them. The people demonstrating outside don't seem to be properly informed. They are ignorant of the facts of the case. I haven't banned anything and have only tried to tell the truth about it," he added.

Asked his advice for living a happy life, His Holiness first said he didn't know, but then suggested that taking a more holistic view of what happened, keeping in mind that things are interdependent, and cultivating an altruistic attitude will help.

Speaking about developing inner values, His Holiness cited research done in America in which a group of people were given basic meditation instruction and training in developing compassion. First their blood pressure, pulse rate and general stress levels were assessed. These measures taken again after three weeks compassion training showed a marked improvement. What's more participants found they got on with their companions much better too. He said:

"We are social animals and it is in our own interest, if we want to live a happy life, to think of the rest of humanity. If we want to improve humanity, we have to start with individuals. We need better education that introduces secular ethics from childhood through to university. We are piloting a curriculum to do just this. You could try it in schools here in Hamburg and observe the results for 4 or 5 years. If it's effective then you could extend it to other schools."

Speaking on meditation the Buddhist leader said "Just closing your eyes and cultivating thoughtlessness doesn't do the trick. It's better if our intelligence is active."

His Holiness described three levels of awareness: that gained by listening or reading to begin with, then that gained by contemplation and thinking things over and finally paying single-pointed attention to the matter in hand which makes you deeply familiar with it and generates real experience.

He mentioned the Buddha's unique advice not to take his teachings at face value out of faith, but to examine them in the light of reason. This, he said, is a key feature of the Nalanda tradition. He recommended that in order to build basic mental strength we need analysis and awareness, pointing out that the Buddha said: "You are your own master."

Among questions from the audience was again an enquiry about demonstrators encountered on the streets outside. His Holiness repeated what he had earlier told the press, noting that the demonstrators enjoyed freedom of expression, which is good. He added:

"The point I want to make here is that I haven't banned the practice they are talking about. My duty is to make the situation clear, no more than that. Whether other people pay attention is up to them. I wave to them when I see them, and sometimes they wave back."