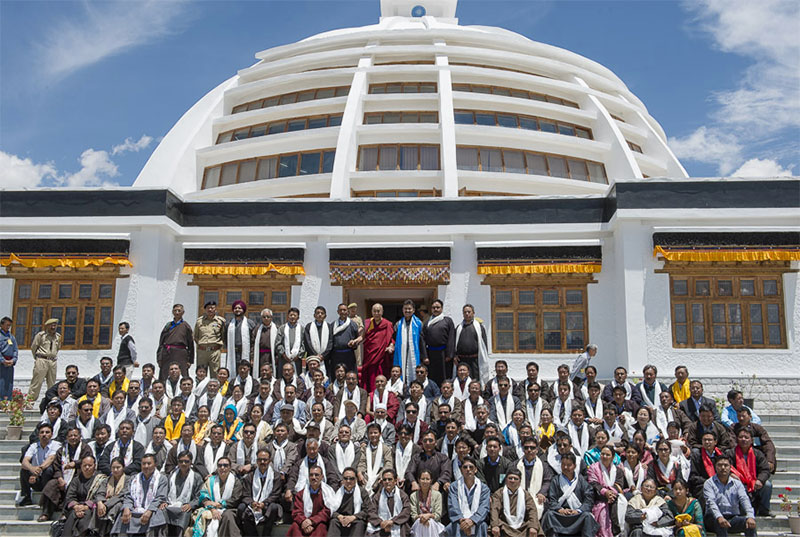 Dharamshala: - His Holiness the Dalai Lama was welcomed into the council chamber of the Ladakh Autonomous Hill Development Council, Leh (LAHDC) on 15 July, where His Holiness heard about the hardships the Ladakhi people have overcome and spoke of the importance of secular ethics in modern education.

The Chief Executive Councillor, Rigzin Spalbar gave a brief overview of the 18 year existence of the LAHDC. "Ladakh is a region of strategic importance which has led to an instability in the Ladakhi way of life" he said. He then explained that the life the Ladakhis led included an optimum use of resources and preservation of traditional values while also embracing modernity. He admitted that it was the concern for a greater local role in decision making in the year 1995 that led to the establishment of the LAHDC.

His Holiness then thanked for the opportunity to meet everyone and for the account of their activities. "You have faced hardships and have coped with them. I have no special contribution to make for I am only a guest here, but we have been close friends for many years." said His Holiness and congratulated them on the hardships they have overcome.

"Your plans for the future are good and now implementation is in order. Other than that, you know better about your needs than I." said His Holiness.

"One thing I would like to talk to you about though is education." continued His Holiness, "I had the opportunity to visit universities in countries all over the world. Many scientists, educationists and thinkers agree that our existing education systems are inadequate. Not enough time and energy is given to nurture inner values and ethics. I tell people that we need a more complete system of education that includes training in ethics; secular ethics. India's constitution is based on secularism, a respect for all religious traditions and even individuals who have none. Secular ethics is appropriate for modern society."

"I'm not talking about God, Allah or Buddha, but about developing a better society which revolves around education. We need to think of ourselves belonging to one human family. If we can do that, then there is a possibility that by the end of the 21st century we can create a happier, more peaceful society and this depends on our own actions and not on who we pray to. The 7 billion human beings alive today are our brothers and sisters; therefore we need cooperation based on trust and self-confidence to create an open, compassionate, harmonious society." continued His Holiness.

His Holiness said that although many agree, they do not yet know how to introduce secular ethics into our current curriculum and hence are working to develop a study program that can be piloted in a couple schools and if successful then it could be extended to other schools taking into account of its members rights and aspirations.

"If you harm and bully others, it will not do good to oneself." His Holiness pointed out. "The scientists have shown that constant fear and anger damages our immune system, while warmheartedness is good for our health"

"Here in Ladakh you have long been living in harmony which you must work hard to keep it up" encouraged His Holiness.