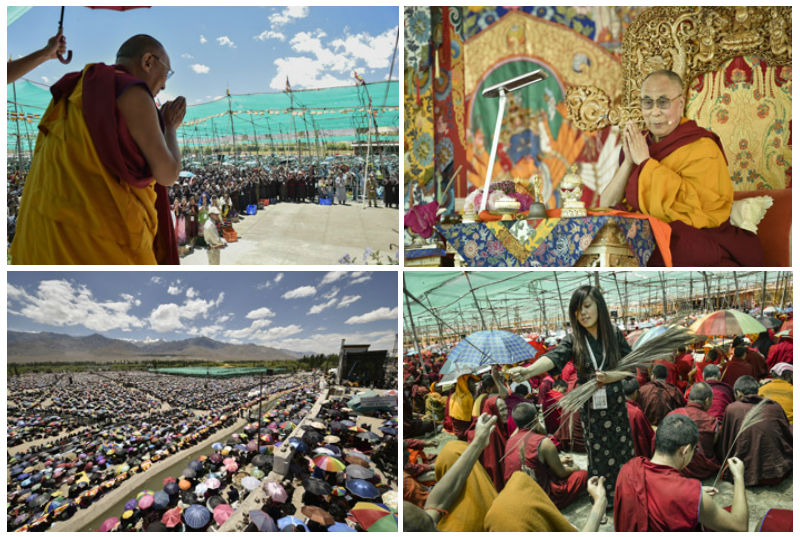 Leh, Ladakh, J&K, India 10 July 2014   His Holiness the Dalai Lama performed the self-generation rituals early in the morning before taking part in the preparatory precedures for the Kalachakra Empowerment.  Inside he greeted the Lamas and fellow dignitaries.

After recitations of verses in praise of the Buddha, the Heart Sutra and verses from Nagarjuna’s ‘Fundamental Wisdom’, His Holiness began:

“We are going to conduct the Kalachakra Empowerment on the basis of a sand mandala, and today we’ll go through the preliminary procedures. There are many religions in the world. All teach love, compassion and tolerance, counselling their followers not to give in to anger or to hold grudges. Because greed is a source of harm, they also teach contentment and self-discipline. It sometimes seems as though Christian practitioners are more active in actually helping others. Christian monks and nuns also tend to live a simple, modest life.”

He reiterated that all religious traditions have teachings on love, compassion, tolerance and self-discipline in common, but differ when it comes to their philosophical positions. Buddhism is grounded in the Nalanda tradition, he told them, which is based on reason. Today, when levels of education are high, many find the Nalanda tradition with its stress and reason and knowledge attractive.
“We are gathered for a Buddhist teaching,” he remarked, “in a land where Buddhism, coming from Tibet, has flourished for a long time. While many of you have come from across Ladakh and the Himalayan Region, about 5000 have come at great cost and hardship from abroad, Chinese and people from other Buddhist countries among them. I’d like to thank the organizers for the good work they have done to make this event possible.

“Whatever religious tradition we follow, whatever different customs and languages we observe, we all want happiness. In Buddhism we talk about mind being of the nature of clear light. All sentient beings have such mind of clarity and awareness. The practice of Kalachakra teaches us how to actualize the clear light mind within us.”

His Holiness said that what everyone gathered before him needed was a good heart, a warm heart, a less selfish attitude. He said that no one wants suffering, so the best thing to do is to try to help people and at least not to harm them.

“During the three days of preliminary teachings you heard many things, but most important was the advice to be a good person and to be kind to others.”

“During the last three days of teaching there has been no need to consider me your Lama or Spiritual Master, but in the context of this teaching, the Kalachakra Empowerment, you need to have faith in me. I have visualized transforming myself into Kalachakra so we are about to engage in a master disciple relationship.
He remarked that it is very important to be non-sectarian. Christianity, Hinduism, Judaism and Islam, for example, have long been of benefit to their adherents, so we should respect them. That they are beneficial is good. He stressed the need for people to follow their faith sincerely. Religious harmony and mutual respect is very important. Within the Tibetan Buddhist tradition it is especially important that whether we belong to Nyingma, Sakya, Kagyu, Gelug or Bön we should respect each other

“Ecumenism, non-sectarianism, is important and the great Tibetan masters practised it,” His Holiness said. “These days I meet Westerners who seem much attached to this or that tradition, claiming to belong exclusively to the Gelug or Kagyu traditions. Lamas should not teach their disciples to adopt such postures, but should instead foster mutual respect among our traditions.”

Concerning the Kalachakra tradition, His Holiness pointed out that it had been the 7th Dalai Lama, Kalsang Gyatso’s main practice and that he had been responsible for training the monks of Namgyal Monastery, composing many of the texts and instructions. His Holiness clarified the terms Secret Mantra Vajra Vehicle as meaning that the practice is conducted secretly rather than publicly; mantra refers to protecting the mind, in this case from ordinary appearances.

As part of the preparatory procedures, His Holiness gave firstly the Lay-Persons vows, and then led the gathering in taking refuge and generating the aspiring awakening mind, wishing for beings to be free from suffering. Finally, he also gave the Bodhisattva vows. He mentioned that by taking refuge in Buddha, Dharma and Sangha we distinguish our practice from non-Buddhist traditions, while generating the awakening mind distinguishes our practice as being Mahayana. Having conducted the inner empowerment and advised the disciples to examine their dreams, His Holiness declared the preparatory procedures complete.