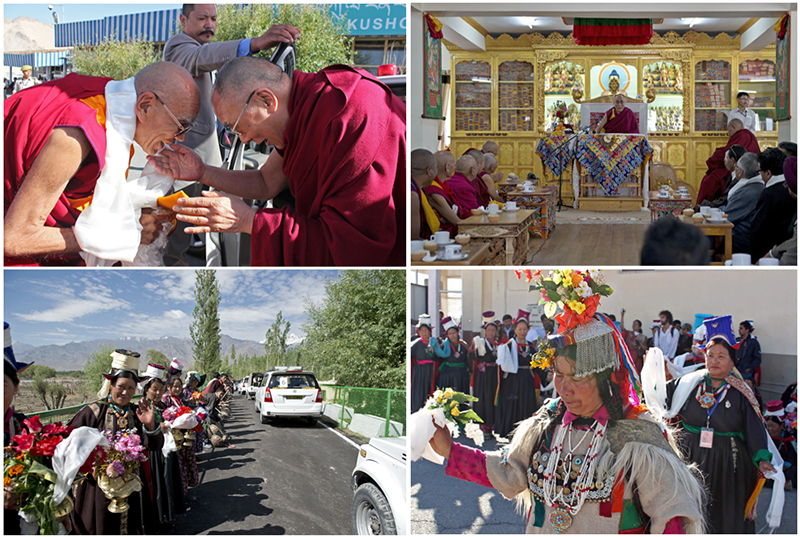 Leh, Ladakh: The Buddhist spiritual leader His Holiness the Dalai Lama was given a grand welcome upon his arrival at Leh, the capital of Ladakh for the teachings and the 33rd Kalachakra. His Holiness was welcomed at Kushok Bakula Airport by dignitaries including Lok Sabha MP Thubten Tsewang and state tourism minister Tsewang Rinzin Jhora, two presidents of the Kalachakra teaching's organising committee and Tibetan Settlement Officer Dhondup Tashi. Thousands of people lined the street on the way from the airport in Tibetan traditional attire to welcome His Holiness.

His Holiness was later welcomed on his arrival at Shiwatsel phodrang by senior spiritual leaders including His Eminence Gaden Tripa, H.E. Tsetrul Rinpoche, the head of Nyingma School of Tibetan Buddhism and other local religious leaders. Speaking to the public, His Holiness the Dalai Lama said:

"My greetings to everyone here. Tashi delek to Tsetrul Rinpoche, who is in good health and to all the lamas, trulku, abbots and Geshes. I have come to Ladakh many times since my first trip in 1967. The people's faith and loveis unfailing and I am happy to be here again. There also has been great development in infrastructure since my past visits and it is good to see many school children, Muslim and Buddhist alike.

For Buddhism to grow in the 21st century, modern education is of great importance. Buddhism should be learned through a proper understanding and not through mere faith. Schools play a crucial role in that. For Buddhism to last, the masses, especially the students, must have an understanding of it. In the exile community, it is scarce for the youth to read scriptures. We are grateful to the Himalayan people, particularly in Ladakh, for keeping Buddhism alive at a time when the senior monks in Baksa passed away, one by one.

In Ladakh, there are Hindus, Buddhists, Muslims, Christains and also non-believers, I believe. But Ladakh as a community is referred to as a Buddhist community. In fact, the whole Himalayan range from Ladakh to Mon. The Buddha Dharma that came to Tibet from Nalanda, spread to the Himalayan regions, Nepal and as well as Mongolia and some republics in Russia. When I first visited Mongolia in 1979, there was a prayer at Ganden monastery. The monks were chanting in Tibetan. They didn't know the Tibetan language, but they knew the scripts. When i visited the different monasteries in parts of Mongolia, sometimes, translators were not available. So the abbots would write a question to me in Tibetan and I would write them answers back in Tibetan.

In the Tibetan Autonomous Region, there is still quite a lot of restrictions on Buddha Dharma and Tibetan culture. In India, we have freedom, being in a democracy. But we also have more responsibility to preserve the Nalanda Buddhist tradition. And to properly preserve it, you must have a good education. When you have modern education, the faith combines with wisdom. The unique thing about Nalanda tradition is that it maximises the use of human intelligence to transform the emotion. Thus, in the long run, monasteries are important, but more important than monasteries are the schools.

Over the last two years, we have been working on a curriculum about secular ethics, which includes ancient Indian psychology. The ancient Indian psychology is very rich and has detailed descriptions about the mind and emotions. It is highly developed even by standards of modern psychology. Western psychology is like a kindergarten thing compared to it. And it is our own treasure. We are working with some American scientists and universities in Delhi and Meerut to draft the curriculum based on secular ethics- not religion. Any education based on religion leads to complications. So Ladakhi Muslims can also study it. This is universal. So once the curriculum is finalised, i think it will be worthwhile for Ladakhi Muslims to experiment it in schools. With fuller knowledge of human mind and emotions, it is much easier to tackle destructive emotions such as anger, hatred and fear.

One time in Thortuk, a Muslim spiritual leader addressed the public and said that if a person who claimed to be a follower of Islam creates blood shed, he was no longer a genuine Muslim practitioner. He then mentioned that a genuine Muslim practitioner must extend love towards entire creatures of Allah. The former chief minister Farooq Abdullah, during casual talk, mentioned to me that the real meaning of jihad is to conquer one's own negative emotion. So in that respect, Buddhism also has jihad, on daily basis- anger, jealousy, fear, all these.

It was here, last year, I met a group of Muslims from different Arab countries. They introduced one lady among them as a teacher. So they were liberal Muslims. You see, hardliners are more reluctant to give equal opportunity such as education. I had visited Jordan a few times and over there, the girls wore hijab. But when we discussed, they were the same. So you see, education can really make a difference. Muslims in India, Malaysia, Indonesia are also very liberal because there are other Hindus, Buddhist, which makes them more open minded. So there can be hardliner Muslims in countries where there are only Muslims, due to lack of knowledge. I told the group they can hold an international conference of Muslims and invite Muslims from different countries. They should share their own experiences, which can be helpful. I think Ladakhi Muslims can make a significant contribution."

His Holiness will give a teaching on Tsongkhapa's Concise Stages of the Path to Enlightenment and confer an Avalokiteshvera initiation in Padum, Zanskar, on 23-25 June.