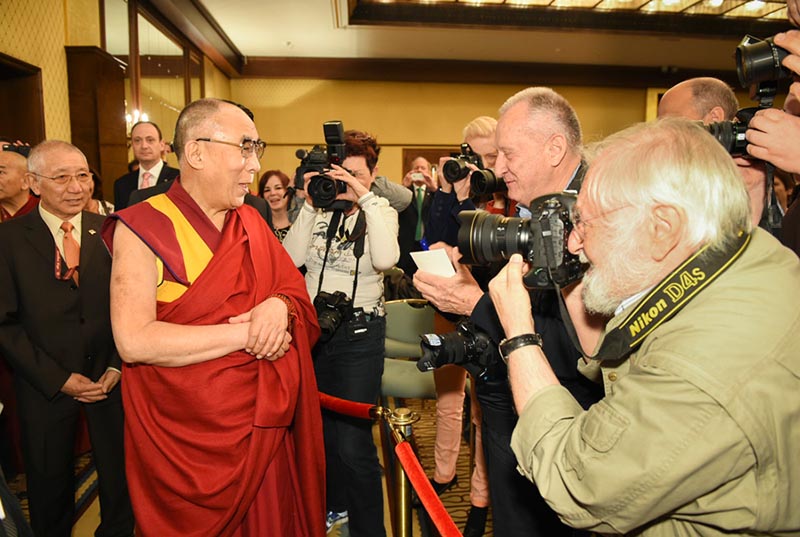 Frankfurt, Germany: – In the early part of his second day in Frankfurt, His Holiness the Dalai Lama on 14 May 2014 held a meeting with the media; afterwards he met with the Board of Tibet house. When addressing the crowded press, he outlined his three commitments, as well as commending the media and their role in keeping the public informed.

Elisabetta Schadt, a young girl reporting for a children's channel asked what he likes and dislikes about being Dalai Lama. He told her that when he was in Tibet there was too much ceremony and formality, whereas, he prefers things to be practical and straightforward.

"Ultimately, although you're young and I'm old, you're a girl and I'm a man, we are the same as human beings."

When asked whether he could resolve controversy regarding Shugden he briefly summarized the history of the issue, saying that his responsibility is to make clear that the practice involves worshipping an evil spirit. He reiterated that whether people choose to listen to him is entirely up to them. He drew attention to a book 'The Dalai Lama and the King Demon' written by Italian journalist Raimondo Bultrini that gives a thorough account of the affair.

To a final enquiry about a rumour that he had been invited to celebrate his 80th birthday in Wiesbaden next year, he said that his life-style as a Buddhist monk who gets up at 3am and goes to bed at 6.30pm doesn't leave much room for parties.

In his meeting with the Tibet House board his emphasis was on the role Tibet House has as a centre of learning focused on the mind and emotions.

"To help develop compassion we need to have better knowledge of the mind," he said. "I'd like to see the science of the mind as an academic subject made available here."

After lunch he drove to the Farport Arena where he spoke to an audience of 4800 about the importance of cultivating inner values in the pursuit of a happy life. He said:

He conceded that while we are all motivated to some extent by self-interest, it needs to be wise rather than foolish self-interest. The more we are concerned for the well-being of others, the closer we will feel to each other, enforcing trust which is the basis of friendship; he also added the importance of having friends.

"When you are motivated by compassion, your mind is relaxed and at ease. Fear and suspicion make us anxious so that even if we're well-off we're unhappy. [...] In our materialistic way of life we put our emphasis on material things to be happy. What we need to do is to introduce a sense of inner values, compassion and affection, into our education system based on secular ethics."

When a couple who had lost their son in a traffic accident asked how to deal with grief and loss he said: "That's very sad, I'm sorry to hear that. But, it's happened and such things happen to millions of other people. Worrying about it now won't help."

He suggested engaging in compassionate activities, helping other people in trouble, and consoling those who have suffered a similar loss would be an effective way to deal with their grief. He quoted the loss of his Senior Tutor, his rock. Then he realised he had to make greater efforts to fulfill his tutor's wishes.

Answering a question about rebirth, His Holiness said that if we lead a compassionate life without doing others harm, it is almost a guarantee of finding a good life next time. When a member of the audience stepped forward to ask what makes the Dalai Lama happy. He thought for a moment and said:

"At the moment, I'm happy to be here with all of you," and everyone cheered.