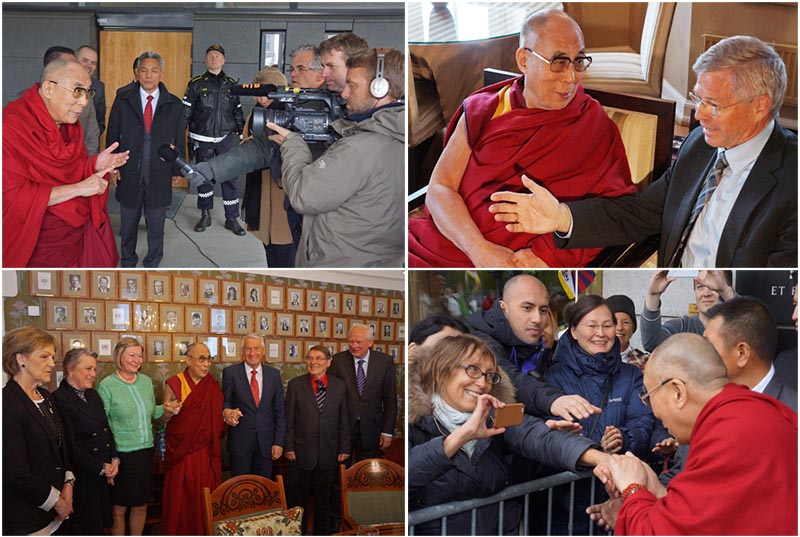 Oslo, Norway, 7 May 2014 - His Holiness the Dalai Lama arrived in Oslo where the questions he was to be asked many times was - what did he feel about the Norwegian Governments declining to meet him?

He replied that such responses have become normal, that he accepts things as they are.

"National interest is important, but I can assure you that the Dalai Lama is not a harmful person. My interest is to meet the public to promote human values, our need to see all 7 billion human beings as members of one family. In the face of major problems, we have to consider what benefits the whole world, not just this country or that. In the long run, we must bring principles and human values to bear in whatever we do, whether it involves politics, business, religion or education. If I had a political agenda, I might feel disappointed, but I don't."

He met with the former Norwegian Prime Minister and the Chairman of the Nobel Committee who noted that it was 25 years since he was awarded the Nobel Peace Prize in recognition of his efforts to bring freedom by non-violence to the Tibetan people.

Asked whether he considered the Peace Prize as a blessing or a curse His Holiness replied, "Of course, as a blessing. I remember Archbishop Desmond Tutu, my friend and spiritual brother telling me how difficult it was for him to meet some people before, which became much easier after he was awarded the prize. I was in California attending a conference of scientists when I heard the announcement and I was asked how I felt. I said, 'Not much different, I am a simple Buddhist monk, no more, no less.' But since the prize was in recognition of my commitment to non-violence and my work for peace, I felt it was a great honour.

"Later, when Aung San Suu Kyi and Liu Xiaobo were awarded the Peace Prize and they were in difficult circumstances, I felt it would have been a source of encouragement and inspiration for them."

Asked whether he was disappointed that members of the Norwegian government and the Speaker of parliament would not be meeting him, he replied:

"No, why? My main interest is in the promotion of human values. From birth we have a sense of affection and some sense of concern for others. We need to nurture it. Scientists have found that to ensure even physical health peace of mind is essential. People often think that love and compassion are only matters of religious concern, but in fact such values are necessary in all human relations. As a Buddhist monk, I am also interested in fostering inter-religious harmony.

"Wherever I go my aim is to meet the public. If leaders like President Obama meet with me that's fine, but I don't ever want to put anyone to any inconvenience. When I arrived here today, I was happy to see the large number of ordinary people who came. The world belongs to all of us, not just to our leaders.

When His Holiness was asked whether China's increasing influence was able to limit his and the Tibetan government-in-exile's work, he clarified that he does not refer to the Central Tibetan Administration, which looks after the Tibetan community, in that way. But he laughed and remarked that it seems the more the Chinese government criticize him, the more his popularity grows.

To a question about whether it seems easier or more difficult to resolve differences with the Chinese authorities since he was awarded the Peace Prize, he said that it is nearly 70 years since the formation of the People's Republic of China. Over that period he perceives different eras. So, you see, the same party, with the same ideology has shown that it can adapt to a changing reality. As China opens up, as its students study abroad and are exposed to freedom and a lack of censorship, things are bound to change. Wen Jiabao said China needs political reform, even US style democracy."

On the question of support for human rights in China and Tibet, His Holiness expressed the view that smaller countries, like Norway, may wield more influence because they are not perceived as a threat.

When asked about the 130 self-immolations that have taken place in Tibet, His Holiness said it is very sad and repeated that these drastic actions should be investigated by the Chinese authorities and not blame His Holiness and his supporters.

A journalist mentioned that as a Nobel Laureate, His Holiness is entitled to nominate others to be awarded the Peace Prize and asked if he had done so. His Holiness laughed and said he thought it was the Committee's job to do that. Asked if he thought he would still be able to visit Tibet and the PRC in this life, he replied that if he lives another 15 or 20 years he hopes so, but if he only lives another one or two years there may not be a chance.

"Anyway, if I am able to go, I hope that journalists like all of you will be able to come too."