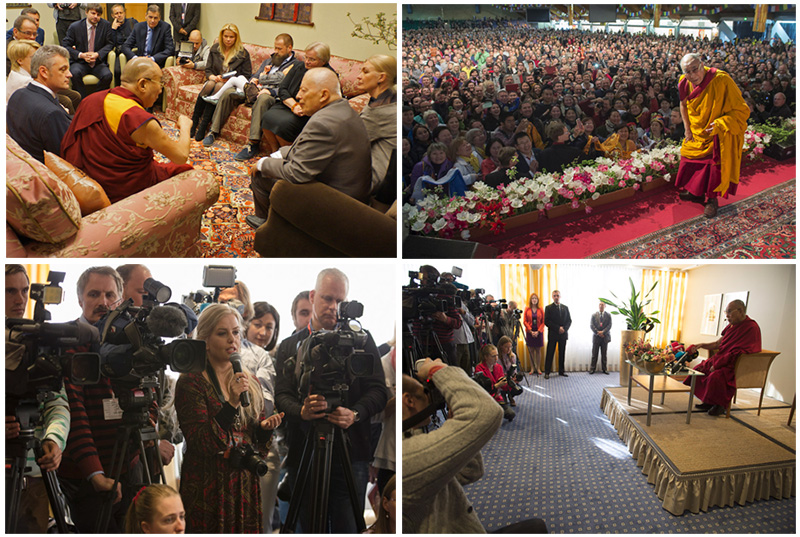 Riga, Latvia: - 'Suffering coming about because of unwholesome actions, doing harm to others,' His Holiness the Dalai Lama on 6 May 2014 said during the Second Day of his teachings at the Kipsala International Exhibition Centre in Riga, Latvia.

When greeting the audience waiting for him at the teaching venue, he asked for the 'Heart Sutra' to be recited in Russian. He quoted the Buddha's saying:

"On my part I will show you the path, but you have to travel it," adding the following verse:

"Buddhas do not wash unwholesome deeds away with water,
Nor do they remove the sufferings of beings with their hands,
Neither do they transplant their own realization into others.
Teaching the truth of suchness they liberate (beings)."

In his fourth visit to Latvia His Holiness expressed his three primary commitments, to extend public awareness of human values, the promotion of inter-religious harmony and the defense and preservation of Tibetan language, culture and its environment.

When asked for his response to the Norwegian government's announcement that no member would meet him, he said it was not unusual. However, the purpose of his visit was to promote his three commitments, and to interact with old friends and the public. He added that wherever he goes, he has no wish to cause any trouble.

Regarding the violence that is occurring in several parts of the world, he said that many instances were the result of past negligence. He cautioned that weapons may appear decisive, but will only bring fear, not a solution. He stressed the importance of making the 21st century a century of dialogue and peaceful solutions to conflict.

When His Holiness was asked about the ongoing disagreement between Russia and Ukraine, he said, 'it was a political issue about which he did not feel fully informed.' He pointed out that, whatever aim is adopted to defuse the crisis; the use of force will not help fulfill it. Differences of language and culture are no grounds for conflict. He cited the example of the French and Flemish speakers of Belgium and those of India who live amicably together in freedom and democracy under the rule of the law.

He spoke of suffering coming about because of unwholesome actions, doing harm to others. Therefore, we should avoid unwholesome action. The cause of suffering is ignorance that is diametrically opposed to reality. As ignorance is the opposite of knowledge, we need to understand what reality is. We need to understand the gap between appearance and reality.

Extolling the Nalanda approach to study and investigation, His Holiness commended the four reliance's as guidelines:

His Holiness added, "I tell people that to be 21st century Buddhists we should follow the Buddha's advice to use our intelligence to the full and transform our disturbing emotions. A great Tibetan Buddhist master in 13th century advised that even if you know you're going to die tomorrow, it's still worth studying today, because it can have an impact on the next life. In terms of study, Tibetan is the most precise language through which to study the Nalanda tradition. Scholars value Tibetan translations of Sanskrit texts because of the precision of their rendering. And there are increasing numbers of English translations from the Tibetan."

Answering questions once more, His Holiness expressed skepticism about astrology. His Holiness reported that his horoscope had predicted that in his 25th year, he would either die or leave the country, which was borne out by events. To a suggestion that karma indicated predetermination, he said no because until it comes into fruition, karma can still be changed. He pointed out that although he is booked to fly to Oslo tomorrow, an emergency or other circumstances could cause him to change his plans. He said that because karma is our own creation we can also change it.

After lunch he met seven Latvian Parliamentarians and two candidates for the European Parliament.

Returning to the stage he described the '37 Practices of Bodhisattvas' as a text about how to meditate on a daily basis. He said that Thogmey Zangpo, the 13/14th century author was widely acknowledged in his lifetime and his practice of the awakening mind of bodhichitta and was so effective that he always basked in peace.

Because the topic is Bodhichitta, the homage at the start of the text is to Avalokiteshvara, the embodiment of all the Buddhas' compassion. His Holiness read through the verses making comments here and there. He pointed out that the Buddha was not enlightened without cause, but through the creation of the necessary causes and conditions.

Amongst the final set of questions from the audience was one about what a mother can do for the lost child after experiencing a miscarriage. He said that while karma belongs to the individual, there are special relations between parents and children, teachers and students and so on. Therefore, in such a case as this, a mother could do something virtuous and dedicate the merit to the child's benefit. He said that when his mother passed away he recited mantras on her behalf and dedicated the merit to her.

Another questioner asked what a Buddhist should do if his country is invaded by an aggressor. His Holiness told him that he would have to judge what would be the greatest benefit to the people. He mentioned the Jataka tale that recounts how the bodhisattva, in a life prior to becoming the Buddha. He decided to take the life of a man who was intent on killing the 499 other people on board; thus, preventing very negative karma.

A great appreciation was expressed for the last two days of discussion and His Holiness was invited to speak in the following year, which His Holiness humbly accepted.

Finally, Telo Rinpoche offered thanks to everyone who had made the event possible, supporters, organizers, volunteers and most of all His Holiness. To conclude, Russian singer Boris Grebenshchikov played a gentle song, with that His Holiness left the hall on a great wave of affection.

On Thursday, May 8, he will fly to Oslo, Norway to attend a meeting of the Nobel Roundtable.