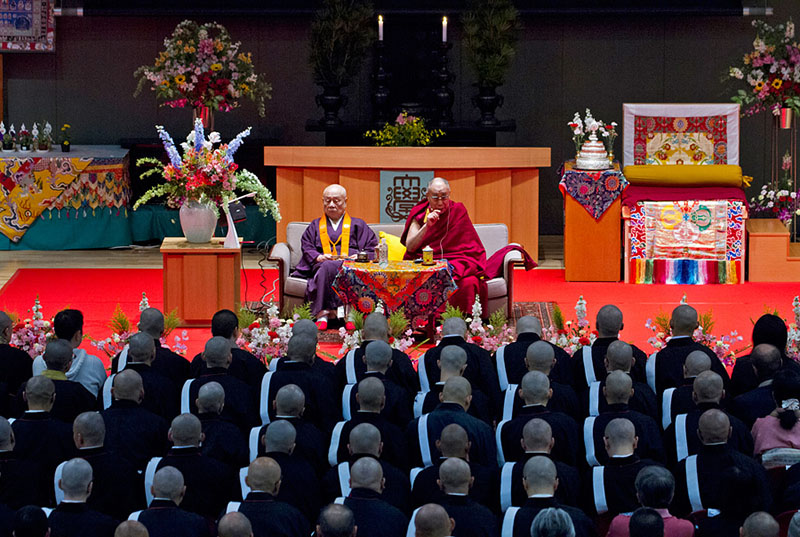 The first prepared question from members of the University was, 'What does prayer mean to you?' and His Holiness replied that prayer is common to all religious traditions. However, Buddhists, Jains and Samkhyas have no concept of a creator god. The Buddha told his followers, 'You are your own master; your pain and pleasure are in your own hands.' He added:

The Buddhas do not wash away the karma of other beings,
Nor do they remove the consequences with their hands;
They do not transmit their understanding into others' minds;
They introduce beings to freedom by educating them about reality.

When Buddhists take refuge in the Buddha, Dharma and Sangha, it is developing the Dharma in their own minds that is the actual refuge; the Buddha is the teacher and the Sangha are companions on the path. We need to study, which involves listening and reading, reflection and meditation. The Buddha is like a physician, the Dharma is like the treatment, while the Sangha is like the supportive nurses. When we are ill, we need to consult a doctor, but it is not sufficient for him to prescribe a treatment, we have to follow his advice and take the medicine.

A second question concerned what His Holiness considers most important as a Buddhist monk. He unhesitatingly replied:

"The three trainings: the morality, concentration and wisdom presented in the Vinaya, Sutras and Abhidharma. Morality includes the individual liberation precepts common to all Buddhist vehicles in addition to the precepts of bodhisattvas and the tantras. The practice of tantra combines calm abiding with wisdom.

"Every day I get up at 3am and say prayers and do analytical meditation. As a bhikshu, I don't eat after lunch and I go to bed by 8pm and sleep well. When I dream, I dream about what I've been thinking about during the day, mostly reflecting on bodhichitta and emptiness, so my analysis goes on even in my dreams. Of course, in tantra the dream state is also an opportunity to meditate on the clear light. "

"Wherever I go the organizers of my meetings arrange a public talk, because I have a great interest in meeting the public. Why? Because everyone wants to lead a happy life, even animals and birds. No one wants suffering and pain. We don't need to prove this. However, we human beings are different from other sentient beings because having this marvellous intelligence; we have greater potential. We are all just human beings, mentally, physically and emotionally we are the same. We all want to live a happy life.

"These days there are many modern developments and Japanese too pay more attention to the value of material things than to inner values. As a result we face a lot of problems, many of which we have created ourselves. Modern people pay more attention to satisfaction on a sensory level. We like things that look good. We derive satisfaction from looking at and listening to pleasing, beautiful things. Similarly, we get pleasure from things that smell, taste and feel good, including sex. Animals have sensory experiences like this too, but because we also have this marvelous brain and intelligence, we have much more experience on a mental level."
"Modern life, even the education system, is based on the value of material things and a culture of materialism. Discussions with thinkers and educationists suggest that our education system needs to be more involved with ethics, irrespective of faith or a lack of faith. As human beings we need ethical values. In the USA in particular we are developing a project to introduce secular ethics into education. Results so far have been encouraging. We have to think of the welfare of 7 billion human beings because we are part of them. An example of this interdependence is the relation of the Japanese economy to the rest of the world.

"The question of the environment and climate change are a global issue too, not just of concern to Europe, Asia, Africa or the Americas. We should think of everyone not just me or us. What happens on this one blue planet where we live affects us all. We need to take the benefit of the whole of humanity into account, rather than thinking of 'us' and 'them', which becomes the basis for dividing people into friends and enemies and the prospect of war. We need to deal with the injustice in the world; the gap between rich and poor which sees the poor dismissed as almost of no importance. And responsibility lies with us 7 billion human beings, not on the shoulders of the Buddha, Jesus, Mohammed or Krishna. World peace will not come about by merely praying for it, we have to take action. And I believe taking action is something Japanese understand. So, that's what I have to say, thank you."